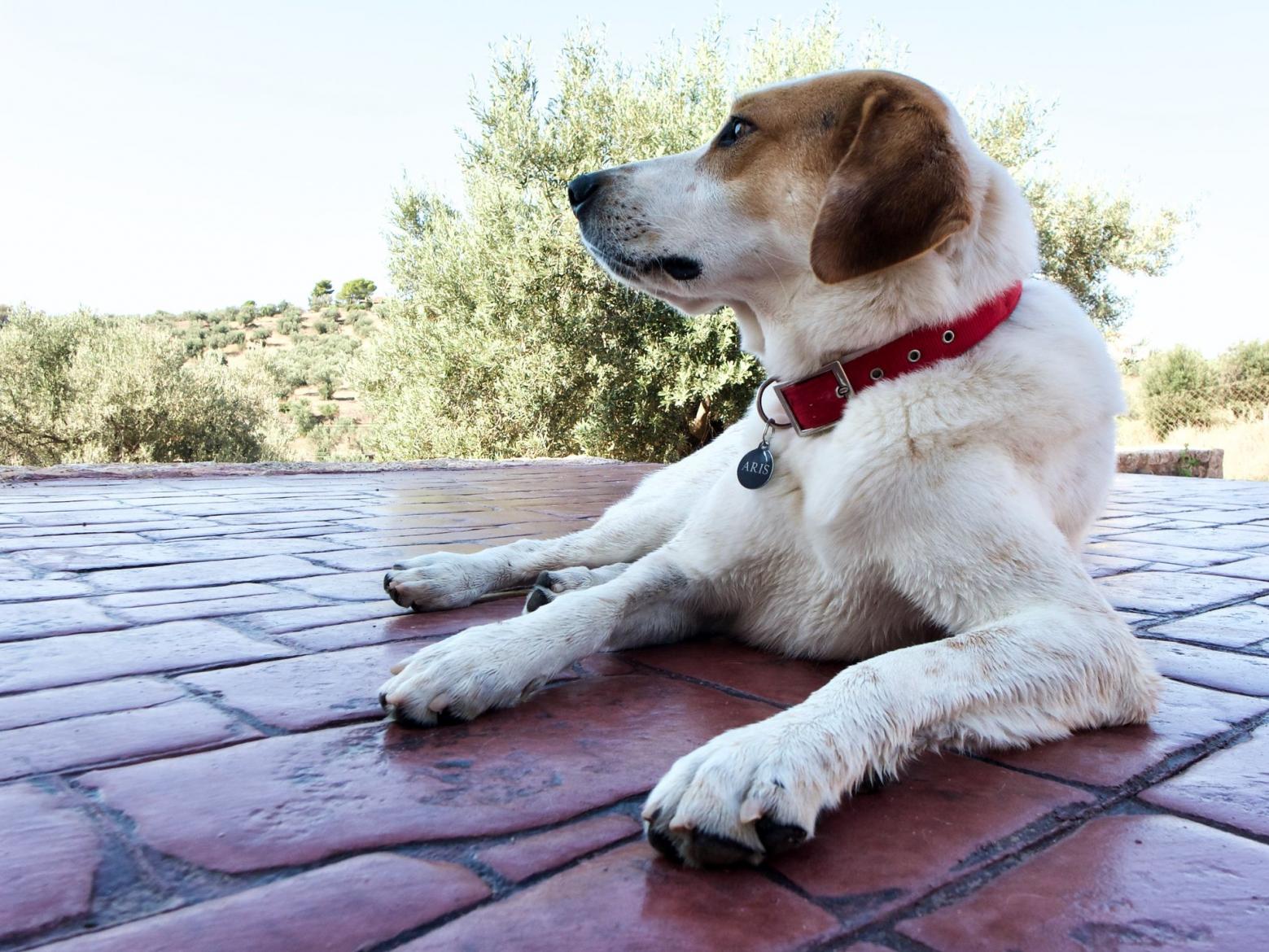 I'm quite a culprit sometimes, and I find it ridiculously funny to tease our dog Ares, who looks at me suspiciously, and you can tell he knows I'm teasing and that he doesn't enjoy it. He decided to join our small, childless family about five years ago and was particularly persistent in finding himself a home. Nick and I had often contemplated taking in a pet, but had decided that, as we both work long hours, it would be utterly selfish to have a pet that spends all day alone. Life so has it that it brings undesirable obstacles our way and Ares happened to be looking for a home at the most in/appropriate of times. If he hadn't twice broken my leg and put me through surgery, I would have probably never entered a Jancis Robinson competition and maybe never considered putting my thoughts down in writing. So, he changed my life, and our lives, in many ways.

He loves to participate in anything we do and dinner is something he never misses. I come home around ten in the evening and as soon as he sees me in the kitchen he's the first to take position, close enough to be able to monitor my actions. If you give him a piece of uncooked broccoli he snorts and looks away, but if you give him oven roasted garlic and herbs broccoli he lunges at it with great pleasure. Anything nicely cooked, he never refuses. Wouldn't it stand to reason that I've also tried him with wine? Whites, reds, sweet. He always wags his tail happily, sniffs, snorts, looks away disgustedly and then invariably starts fiercely sneezing. I love it when he does that. And, then, he looks at me as if to say “did you actually have that”? (Actually wine is toxic for dogs so I would never allow him to taste).

This got me thinking. What was my reaction to wine the very, very first time I tried it? I was probably around twelve, eating out in a nice restaurant with my parents, and wanted to act all grown up and asked for a sip. I remember lingering on the taste of this horribly sour, slightly burning, thin liquid. I couldn't get myself to swallow. I smiled bravely, must have muttered something under my breath and refused a second sip. So how did I go from that reaction to where I stand now? Why did I ever even bother trying wine again? Actually, by sixteen I would enjoy a glass of wine every now and again (at that time it wasn't frowned upon as it is today). Wine is an acquired taste. According to the Cambridge Dictionary an acquired taste is: something that you dislike at first, but that you start to like after you have tried it a few times. Many things are acquired tastes i.e. coffee, olives, some vegetables, raw oysters, etc. Acquired tastes are about broadening our experience and achieving more satisfaction.

I racked my brain. Why did I try again? I guess it had much to do with social/environmental reasons. My parents drank wine, so it was something I saw at home. Also, I had an uncle, whose opinion mattered to the whole family, who collected and cellared wine. I had heard my elders discuss it with him and I could understand that it was something important to do and not something everybody did. So, somehow he was considered more refined or intellectual. South Africa had a history in winemaking. I remember visiting old estates in Constantia and Stellenbosch with my parents. I also remember how impressed I was by the cellars and the smell in them.

Around the same time my peers at school were also beginning to taste the odd beer here and there, so to be included in the ‘cool’ bunch was reason enough to try and get used to the taste, of wine in my case. I distinctly remember forcing myself to taste again, with the expectation and wish to say “I love this”. Probably the first few times I lied through my teeth about liking the taste, but then genuinely the taste grew on me.

White wines were more palatable to begin with. Especially the ones that were more fruity, slightly sweet and less acidic (our brain is inherently tuned to sweet). I distinctly remember myself buying Liebfraumilch, Lancers and Mateus (please spare me!) when I was around 18 or 19. Later on, I tried Chardonnay and very slowly built from there. Some of the first red wine was definitely Nemea, and cheap Australian Shiraz. I then got lucky, because when I was 22, in 1986, I went to Budapest for a month, on an exchange programme. My consultant took me out to dinner and offered me dry Tokaji. She spoke with great admiration and respect of the region and its history, about how it had been degraded during the Communist era, about the famous sweet wines, about the local varieties, and that was the very first time I thought to myself that you are also talked into wine. The story of a wine makes you appreciate the taste of it. I’m a story teller. Stories always carry me away. That is how I started visiting wineries and really tasting. It wasn’t the wine, as much as meeting the people, listening to their story, and then tasting their wine. My palate evolved through these stories.

This is why I can’t help myself laughing when Ares shuns the smell of wine. I used to be like he is, only I pretended better.