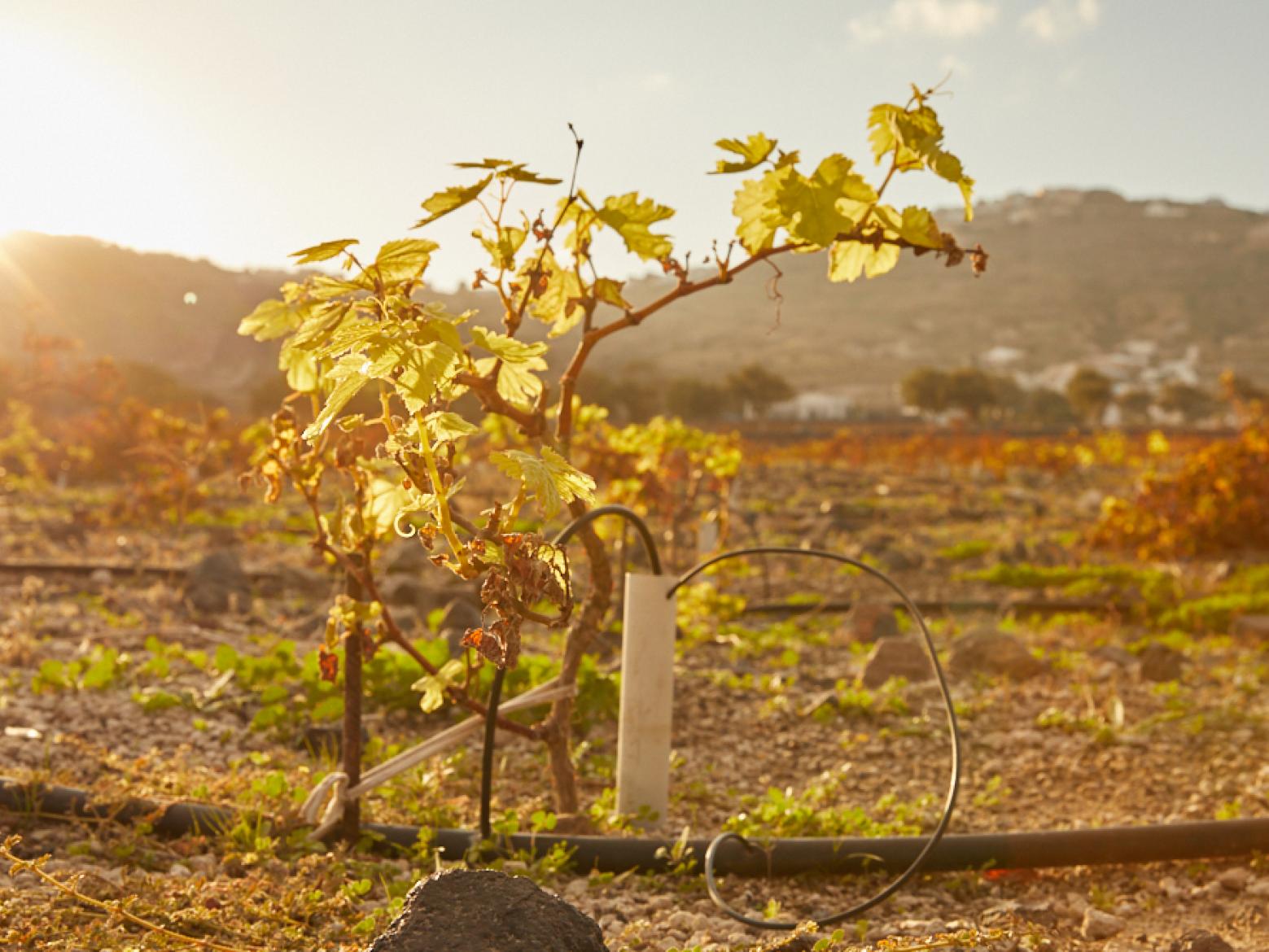 For many years, a dusty wine museum with skeletons in the closet. Today, a dazzling landscape of unique, authentic wines. Welcome to Greece!

My first taste of Greek wine was resin. In my college years, I lubricated my night session with retsina—long before that speciality became fashionable (if it ever has). At Warsaw’s iconic Café Brama, one of the first 1990s "restaurants" where you could just sit down for an afternoon, retsina was served by the carafe. During my first trip to Greece—in winter, by train from Poland through Italy, through endless fog and continuous storms on the Aegean Sea that held ferries in ports—I ordered the cheapest wine with my dinners and was always served retsina. (It wasn't until the end of the trip that I learned the word aretsináto, resin-free, that you could use to modify the order.) That pine-scented, thin tart white wine became imprinted in my memory like the first tastes from childhood, and became the most natural thing in the world; it was only years later that I learned from some wine expert that retsina is a no-do because good wine should never be flavoured with anything and it is made from the worst oxidized base wines in the first place…

The ancient Greeks developed knowledge of wine much deeper than we imagine today. With all their manias—they insisted on mixing wine with water, considering drinking undiluted wine a barbaric habit, which would make them favorites today with the temperance lobby—they showed extraordinary inquisitiveness into vinous matters. Eubulus precisely defined the safe dose of wine a worthy man could imbibe in one session to three calyxes (cups). The most valued Hellenic wines: Pramnian, Rhodian and Lesbian, were shipped in amphorae with an indication of origin and vintage. Oenological techniques unheard-of today (though likely to become rediscovered anytime) were described by ancient authors: preserving young wine with seawater; squeezing the best grapes with bare hands for the softest extraction. The pinnacle of sophistication was the classification of wines by colour, which featured not only white, red, black, and yellow (!), but also "reddish" wines (kyrrós), from co-pressed white and dark grapes: a family of wines related to rosé or (original) claret that has expired since, although returning to favour today, in the age of “natural” winemaking). I read all about it with hypnotic delight in the iconic book The Wines of Greece by Lambert Miles-Gócs.

A decade later, I travelled to Greece with a more specific plan and, of course, a wine theme. One year, I decided to explore Euboea. At that time, the island was home to a cult sweet wine named Ktima Montófoli (I don't even know if it is still being made), reportedly equal to the best Italian passitos. The ferry crossing was short, the calamari in the harbour pleasantly crisp. But no one had heard about Montófoli, the phone was silent, and an unfinished house was all I found where the map indicated the winery. That evening, in a tavern in Káristos, the owner offered his homemade wine. I approved. In a tin jug, he brought a rat blood-hued liquid the unknown to encyclopaedias: a decomposition of undefined grapes, ritual revenge of rebellious yeast, the fermented torment of Iphigenia. It was—and remains to this day—the worst "wine" I have tasted in my life. Its flavour still reverberated on my palate the following day, when the sommelier of a posh Thessaloniki restaurant suggested a five-year-old Santorini by Sigalas. Wearing a saffron dress like Eos's, the new era of Greek wine smiled to me: clear as spring water, electrifying like a freshly plucked lemon, salty like the sea breeze in the setting sun over the caldera, spicy like merchant voyages east, to Pontus and Colchis. A wonderful wine (as in any vintage); yet I could not reconcile it with the dead corpse of the night before.

Who are you, Greece? A museum exhibit, worse—an oxidised corpse, or perhaps a vital source of wine identity? An eternally young kouros or the wrinkled memory of splendour that will never return? What thread links the cultural heritage of ancient wines and today’s taverna plonk? Our beautiful travel experiences notwithstanding, this contradiction remained painful for years, nourished by an arch-Greek nostalgia for the glorious past: a remembrance of the epic deeds of heroes from ancient times. Over the years, there has been a painful void in Greece between declarations and reality. Náoussa was famous in the nineteenth century, but was now more often than not burdened by dry tannins. Gustav Clauss founded a thriving winery in Patras in 1861, but its latest products did not captivate. It was the generation of cosmopolitan oenologists, most often French-educated, who challenged the heavy shadows of the past. Gerovassilíou, Sigalas, Lazaridis, Mercouri, Tsélepos, Paraskevópoulos (Gaia Estate) shaped the new reality at the end of the 20th century, sometimes falling into the traps of "modernization": the most prestigious varieties were Chardonnay and Cabernet Sauvignon, and if indigenous grapes were championed, they were made in the French fashion: white in steel, red in barrel. As everywhere in the world, Greek wines could only compete against French wines. The unique Greek vinous aorist was simplified to monosyllables. It took 25 years before this patient work resulted in the actual appreciation of unique Greek flavours.

But it did eventually happen, and the effort itself has become a shared, internalised history today. Internalised not forgotten, which is now perhaps the biggest advantage of Greek wine. It is not oriented entirely inwards and backwards—like Georgia, for example—nor completely outwards, towards the “future” as understood for example in Bulgaria or Moldova, which have almost nothing left of their respective historical heritage. In Greece, yesterday and tomorrow walk hand in hand, shaping the life-giving diversity of the Hellenic landscape in 2021. Of course, in today's Instagram-driven reality, it is easy to get excited with novelties: the indigenous Skylopnychtis from Zákynthos resurrected from clinical death, or the crazy no-SO2- amphora retsina from Tetramythos. Young wolves impose the narrative in many wine-producing countries so that the classics can be easily overlooked. Meanwhile, the aforementioned first generation of Greek modernizers, today's 60-year-olds who pulled Greek winemaking out of the Middle Ages three decades ago, have put a lot of work into making wines that remain relevant. Evángelos Gerovassilíou, who saved the cult malagousiá grape and then the red limnió from oblivion, setting new standards with his oaked Chardonnay and red Bordeaux blend, and then raised the bar even higher with his second Biblia Chora estate, did not rest on his laurels: today, he has developed an excellent wine tourism venue and achieves his most interesting results with ... assýrtiko (under the Areti label). The master of commerce, Skouras from the Peloponnese, continues to mix Agiorgítiko with Cabernet in his super-Tuscan Megas Oenos, but has also produced the fascinating Peplo, a rosé wine aged simultaneously in steel, barrel and amphora. Rosé wines are becoming an important segment for the giant shipper Tsantalis, and two very different but equally delightful rosés are made by Gaia Estate, where additionally in the prosaic conditions of a barrel room one of Greece’s most atmospheric tasting rooms has been created. Katogi Averoff, once the solitary representative of good wine in mountainous Epirus, famous with their oaked Cabernet, now shocks bourgeois palates with their spicy herby Vláchiko (Rossiu di Munte label), an ancient grape that even hipsters have not yet discovered.

Greece is the only country where today, you can taste next to each other a totally old-school wine such as the noble oxidised Papaïoannou or Katsarós, the oaky ultramodernism of Mega Spileo or Skouras, the hip natural wines  of Thymiópoulos or the naughty Ligas, but also much the more sophisticated explorations of naturalism such as the amphora labels from Tetrámythos; wines aged at the bottom of the sea, in concrete eggs, in hundred-year-old barrels, washed down with new-generation Retsina, made from the top-quality oak-fermented Assýrtiko (Kechris’s Tear of the Pine). What's more, all these styles do not fight against each other politically, as happened in Italy or France, but they coexist peacefully, creating the white, red, pink, orange, and golden mosaic of this so very diverse country.

Greece has always had it in her. But she took a long time to resolve her tragic conflicts and cut the Gordian knot of its own inability. Today, she has left that behind her—and is more beautiful than ever.

Wojciech Bońkowski is a wine writer from Poland, author of four wine books and editor-in-chief of the largest Polish wine medium with 600K readers yearly, Winicjatywa. In June 2017 with fellow wine writers Ewa Rybak and Ewa Wieleżyńska, he launched Ferment, Poland’s new printed wine magazine. He regularly contributes to Meininger’s Wine Business International and www.timatkin.com, and is a Decanter World Wine Awards judge. He currently serves as President of the Polish Wine Trade Association and is a Stage 3 Master of Wine student. He specialises in the wines of Italy, Greece, Croatia, Central Europe, and Port. He is moreover a 50 Great Greek Wines judge. And he actually has another life in which he researches 19th-century music.