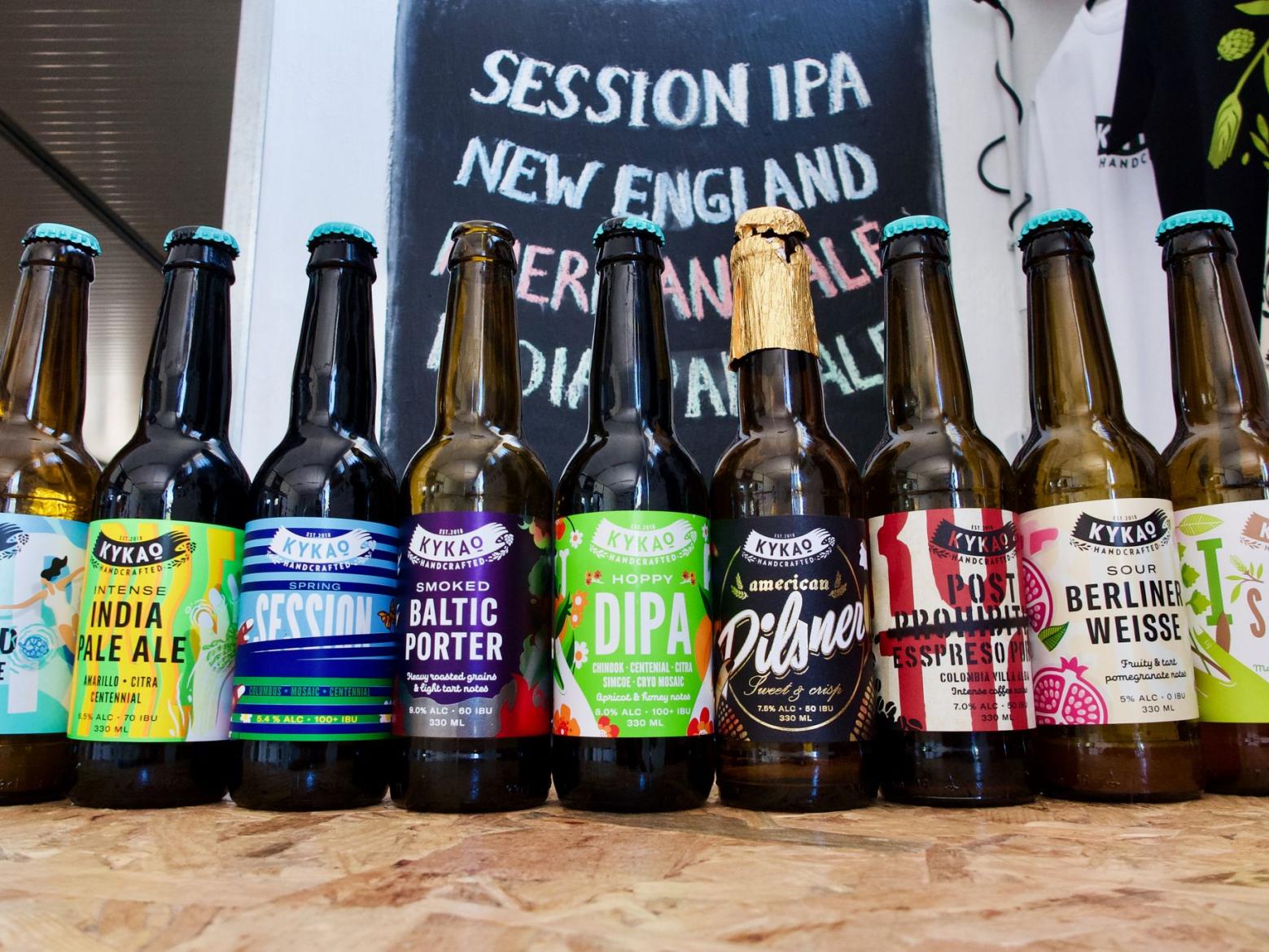 My good friend Panagiotis brought me a bottle of what looked like beer, but on the label it said ‘Assyrtiko Reverse Engineered’. “What on earth is that”? He smiled, and said “I thought you should taste this”. This was my first contact with Kykao microbrewery. Now, bear with me. If you’re into wine, and you’re given something named like that, wouldn’t you also be rather baffled and curious? (They also make Champagne Reverse Engineered). Immediately, I sent them an e-mail and arranged a visit. I thought, ‘these guys are seriously quirky’. Knowing me, anything unconventional is my cup of tea. I couldn’t wait to get there.

Located in the outskirts of Patras, in an old warehouse, we arrived at a cross between Christiania in Copenhagen and Woodstock as Nick, very astutely, described it. As we pull up the car, a bearded, barefoot, long-haired creature, of indefinable age, with the absolutely bluest eyes and effusive manner rushed over to welcome us. This was Kostas. My man. The guy I had spoken to on the phone a couple of times. The brewer. I gulped. Talk about off-Broadway. He was decidedly off, off-Broadway.

On the outside there were a couple of self-made tables and couches, but as it turned out, everything on the inside is also hand-made. As we walk in to what could be considered the entrance and tasting room, there’s a table in the centre at which two people are crushing spices in a giant wooden mortar, with ginger and garlic laying in front of them. “On Friday evening we always have friends who come up here, and we cook something and sit around drinking beer. Today, we’re going to make a kind of lamb tikka kebab, which we’ll serve with home-made pita bread”. They make different things every Friday, and everybody pitches in. We couldn’t stay (boohoo!), but I’m definitely coming back for this. I even promised to bring some South African boerewors, chakalaka and mielie pap.

To the left of this huge hall is the brewery and to the right is the warehouse. “This here is a cooperative effort, five of us, and many many friends who have put in hours of work without ever asking for something in return. If you saw this place when we got it, you wouldn’t believe what it looked like. Everything needed fixing. This was the cheapest place we could find. We were engineers, out of university, all unemployed and we had a crazy idea. We’d been home-brewing throughout our studies, so why not invent a job for ourselves. A microbrewery. We had no money. We managed to pull together 50,000 euros, and whatever you see in here we made. We plastered, painted, fixed the lighting, the piping, ordered the equipment, assembled everything ourselves, and started our venture. We work six days a week, 13 hrs a day. Even bottling, capping and labeling is done by hand. One bottle at a time”. (!!) The team is Kostas Siozos, his brother Vangelis, Angelos Pliatsikas, Giorgos Floros and Vangelis Skouras. All in their mid thirties. A real cooperative effort. Nobody is in charge. They all make decisions together. Everybody helps with everything, but each has his particular expertise.

I wondered at their guts. This hippy looking man (electrical engineer degree) has spent hours reading up on beer and brewing. Looks are often very misleading. A real scholar; a passionate and daring young man. He goes on to explain how beer is made, we try four ‘seasonal’ beers, which are still in the process of maturing and then we go to the warehouse where there are six or seven barrels. These are old barrels given to them by winemakers. Two he has purposely infected with brettanomyces. “I know you guys in the wine business cringe when you hear about brett, but in brewing it’s not the same. It can add complexity, a kind of funk that is enjoyable”. These beers are all still in the maturation process. Here we also get to try one of the three joint efforts with Norwegian brewer Kjetil from Solo in Crete. He explains that in the brewing business people share their knowledge and have no problem sharing the exact recipes of the beers they make. “You know, I think that when knowledge is shared one gets better, and the better the other brewers are, the harder you try to come up with innovative ideas. You progress”.

We then sat down to taste. We tasted 14 beers of the 40 something they make. We started with the seasonal beers, like their New England IPA, which are always more balanced and easily drinkable and then went on to the beers that are quirky and characterful. “You know, when you make beer you can make them purposely out of balance. You can use tons of hops, or different hops for different results, or different yeast starters that promote thiols. When I tasted wines from Thanassis Parparoussis and to Panagiotis Papagiannopoulos of Tetramythos I thought why can’t beer also have acidity? I then started experimenting with ‘sour’ beers. That’s how I came up with the Assyrtiko and Champagne Reverse Engineered. What I did is I got a friend to give me the chemical analysis of 50 Αssyrtiko wines in terms of tartaric, malic, citric acids in gr/Lt, I evened the acidity out a little, because I can’t risk making something which won’t sell at all, and I made a beer that had the exact same amount of potassium and organic acids that you would get in assyrtiko must, and the aromas we added with the hop and choosing a yeast strain that promotes thiols”. Ahhh! So, reverse engineered means putting the quantitative data of the wine to the beer. Now, that made sense. We also tried the Flemish Red Ale, second fermentation in bottle, two years in barrel and brett. I took a sip and freaked out. “All the wine people freak at this beer. They just want to spit. I always say that for this, the ‘sip rule’ holds. Your first sip is a shock. The second, your palate adapts, and with the third sip you know if you like sour beers”.

During lockdown they also decided to make lager, because as I’m told, lager ties up your vats for four months (instead of one). Nothing like the lagers we are used to drinking from the industrial breweries.

All the while we are listening to jazz and Delta blues. It turns out they play the guitar and the harmonica. They are still struggling to make a living, but this has given them soul to try even harder. “It’s a very expensive project. Most of the time we are not making more than 5 to 10% profit on a bottle. You need time and it’s not as if we have cash stashed away to keep funding our effort”. They run an e-shop, where one can order anything they make and have it shipped, and they have already caught the eye of Ratebeer who awarded them with the Best New Brewer in Greece 2019 award and their ratings have climbed to the top (brewery in Greece) on Untappd. They make amazing beers and it’s worth seeking them out, but they also have some of the funkiest labels.

Not bad, for two years on the block and in Greece! 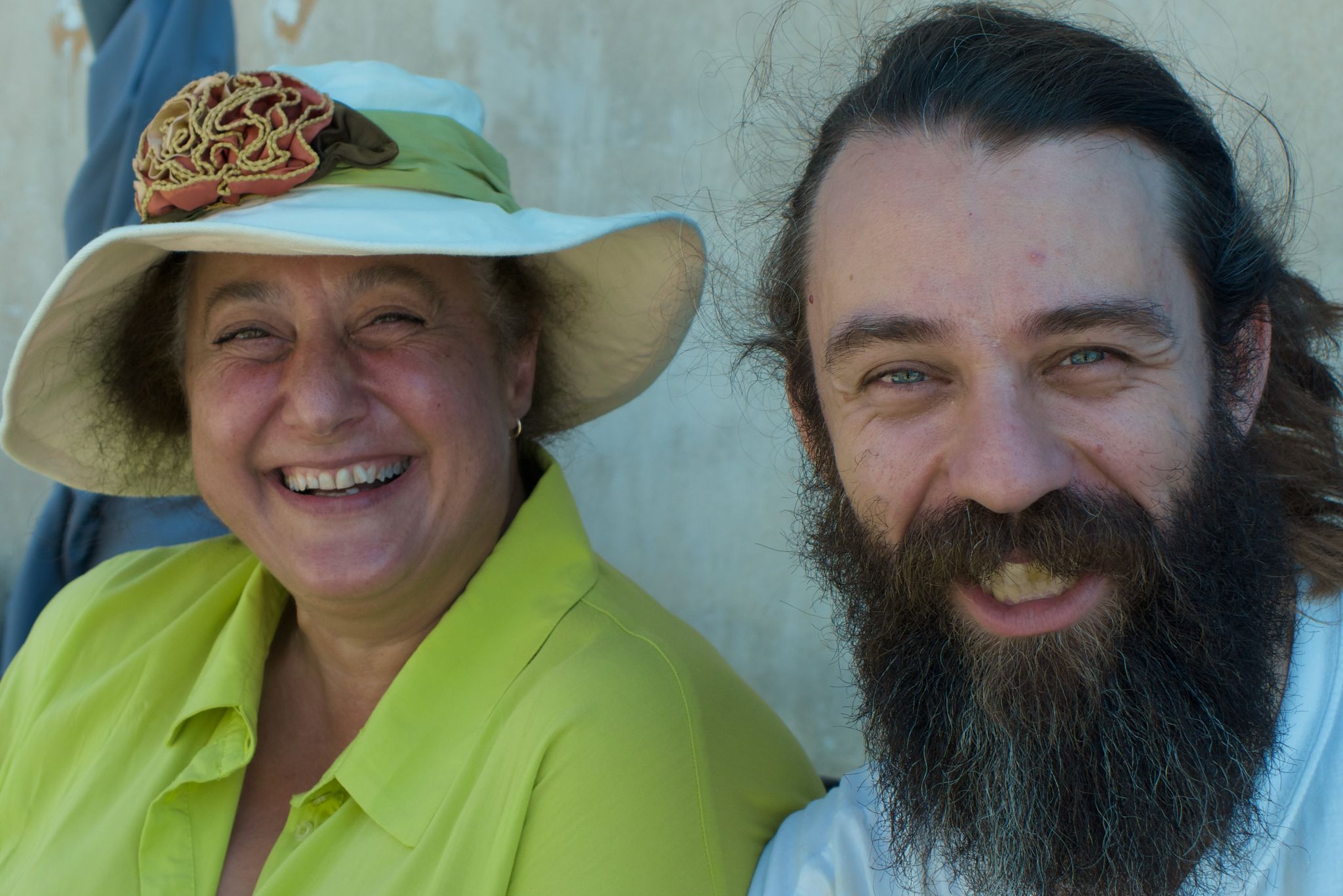