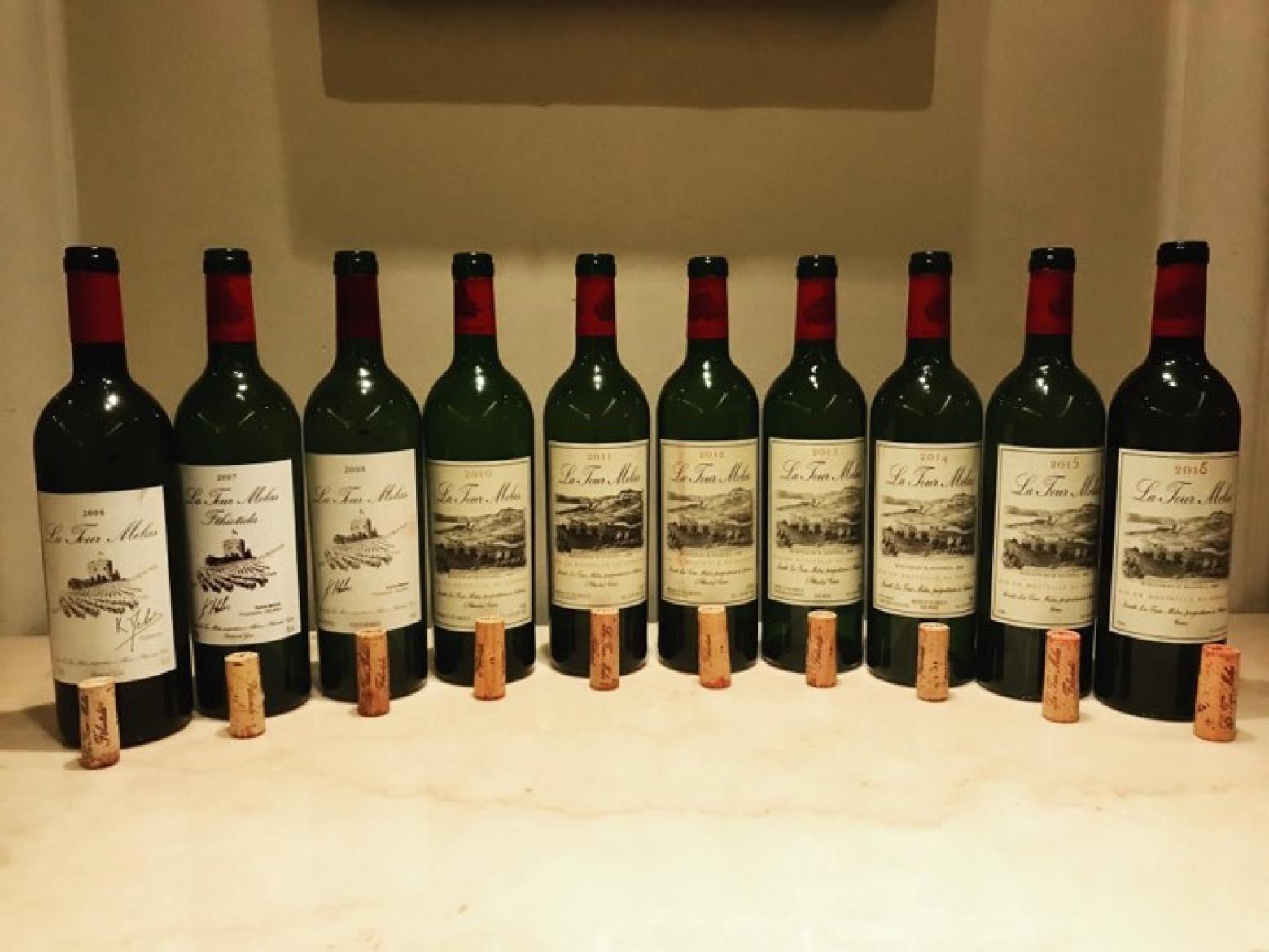 A few weeks ago I had the privilege of hosting a 10 year vertical of the emblematic Greek red wine, La Tour Melas. In Greece this red blend of Cabernet Franc and Merlot is a unique case. Firstly, because it is in the opposite direction of the trend of indigenous varieties and secondly, because it is a right bank ''Bordeaux'' blend (most of the other Bordeaux blends in the country have adopted left bank blending i.e. Cabernet Sauvignon and Merlot).

After tasting the wine over and over again and understanding its true colours, its development and its combination of power, but also its elegance, it made me think. Should we judge a book by its cover or by its content? In this context I feel that, to a certain extent, we may be unfair to wines made of international varieties. If there is one thing that the world of wine teaches us is that we should avoid stereotyping and we should keep an open mind. Outstanding wines may be produced by all producers, regardless of production size, and of all varieties, whether indigenous or not. How does each producer express his terroir and how does he highlight it (if he does manage to do so)? This is the key question to be asking. Does it stand out for its personality and expression? Could this same wine be produced anywhere in the world?

La Tour Melas is set in 11 hectares of land, near the village of Achinos, in central Greece, two and half hours drive north of Athens. In 2001 the very first vines of Cabernet Franc, Merlot and Petit Verdot were imported from France and planted. There was an experimental vinification in 2004. First bottling was in 2007 of the 2006 vintage. Production is no more than 5.000 bottles per annum. Producer Kyros Melas feels proud when he says “We do things the hard way; we treat the land with respect and even selectively use biodynamic practices. Since 2012 fermentation is spontaneous, and as the vines age we are reducing the amount of new oak. It is a very demanding terroir, which gives us a completely different result at each vintage.” 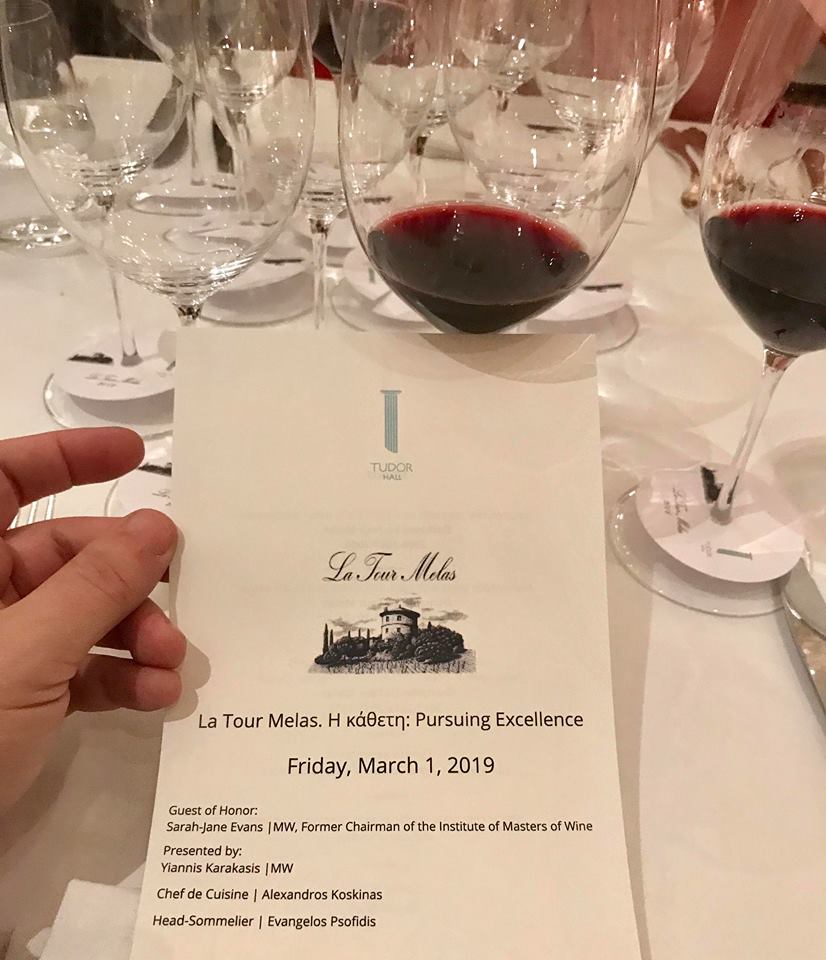 10 vintages were tasted and paired with the sublime dishes of Alexandros Koskinas, chef of Tudor Hall in King George Hotel. The food and wine pairing was made by Evangelos Psofidis, Head Sommelier of Grand Bretagne and King George.

La Tour Melas 2006 Smoky oak and ripe cherries on the nose. Concentrated though still oaky with a core of sweet fruit. A sensual wine.  ***

La Tour Melas 2007 (warm vintage with 697 mm of rainfall, 40% Cabernet Franc, 60% Merlot, 3.000 bottles). My favorite amongst the old vintages, with notes of cedar and red cherries and a deep colour that led to a medium full bodied palate, which was layered and complete. Holding nicely with plenty of life ahead. Full of depth and nuance. ****+ (Score in Wine Records section)

La Tour Melas 2012 (very warm July and August with temperatures exceeding 45C, 969 mm of rainfall, 58% Cabernet Franc, 42% Merlot, 4.600 bottles, first vintage of 10% oak fermentation). Aged for approximately 19 months in barriques this is a full bodied ripe style which caresses the palate. It shows high level of concentration with scents of cherries, toast and liquorice. Unwraps slowly and I suspect that it will improve over the next 2 years. **** (Score in Wine Records section)

Winemaking followed during these vintages: Hand harvested, spontaneously fermented, progressively oak fermented to 90% in 2016, unfiltered with less oak influence (70% in 2016) and bottled with less than 100 mg/lt total SO2.

La Tour Melas 2015 (hot September that was even warmer than August, 857 mm of rainfall, 56% Cabernet Franc, 44% Merlot, 75% new oak, 4.600 b). Outstanding effort packed with Cab Franc vibrancy outlined by mint and cassis. Refined, yet also loaded with abundant but perfect tannins and a long lingering finish. The most exotic of the ten vintages.****+ (Score in Wine Records section)

These last vintages are a clear demonstration of the detailed work in the vineyard and the (subsequent) less intervention in the cellar, that has led to more layered and complete wines. The percentage of Cabernet Franc in the blend makes a big difference and gives an idea of the style of the wine; the more of it the more elegant and perfumed it would be. The following years will raise the bar even higher. 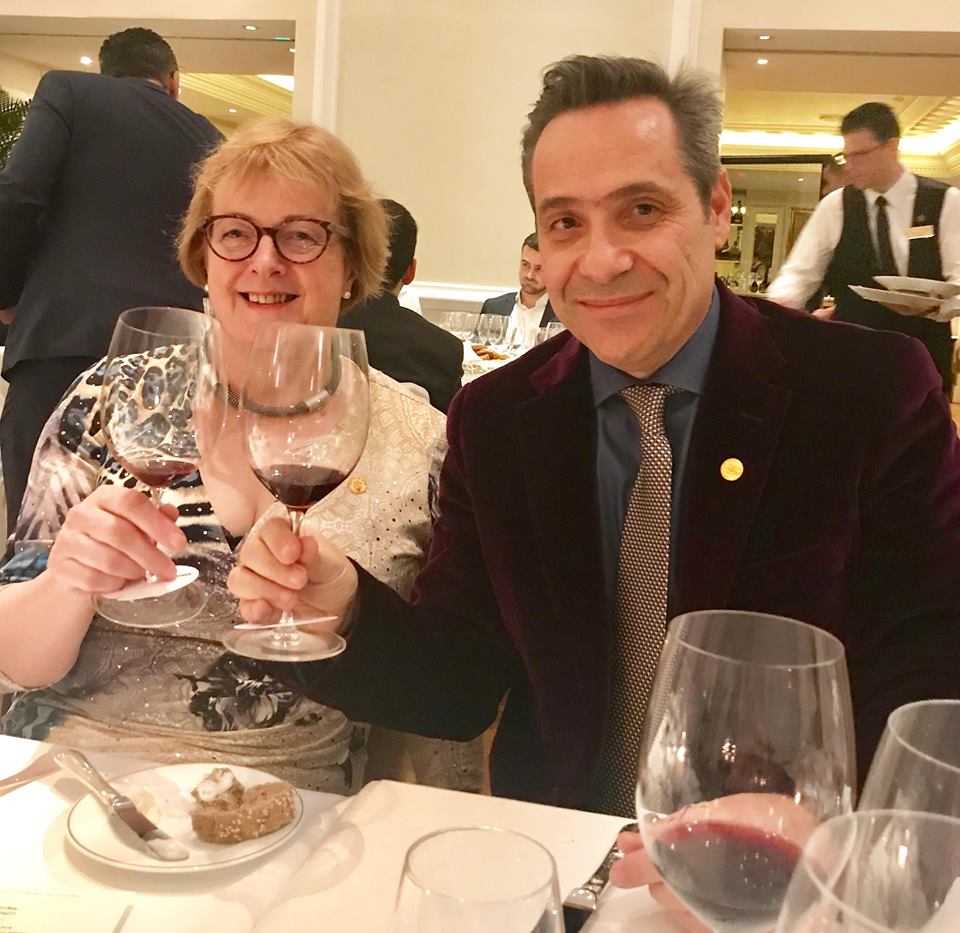 Together with Sarah - Jane Evans MW 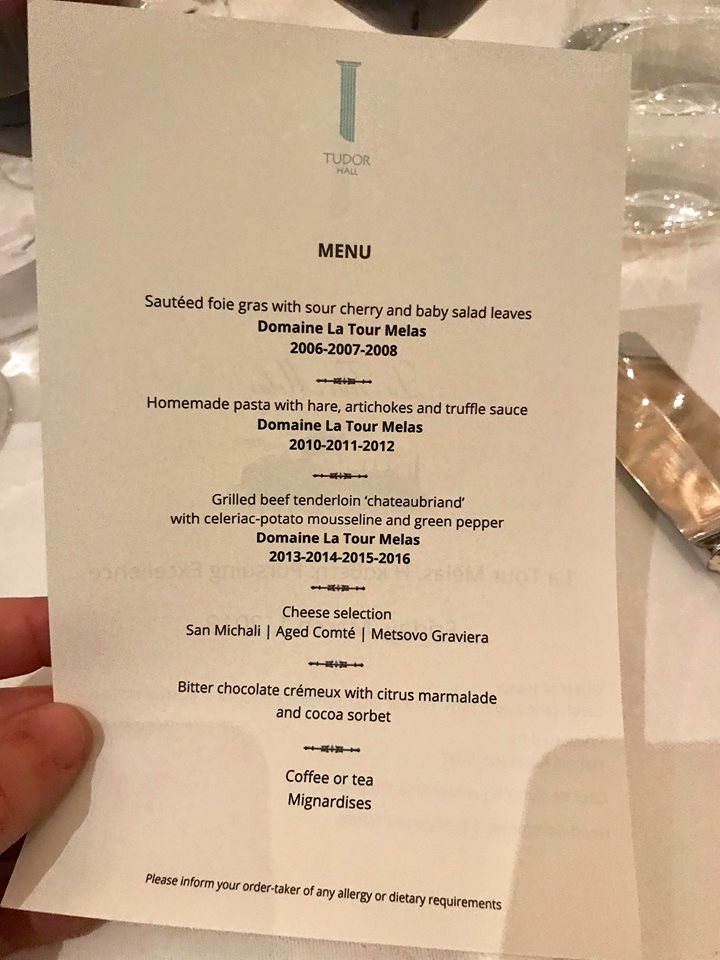 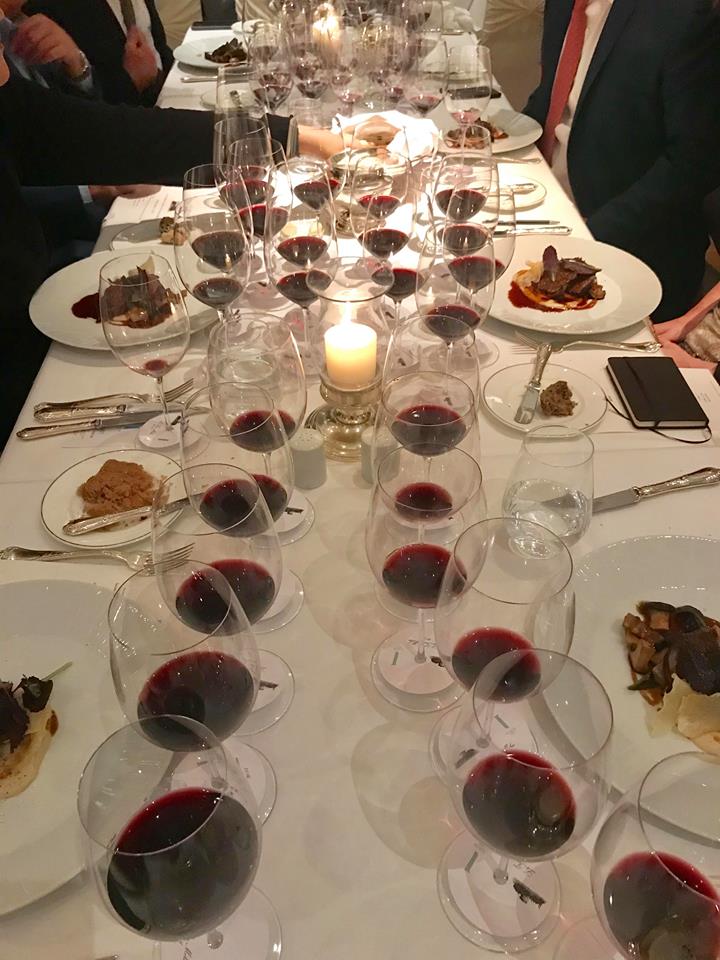 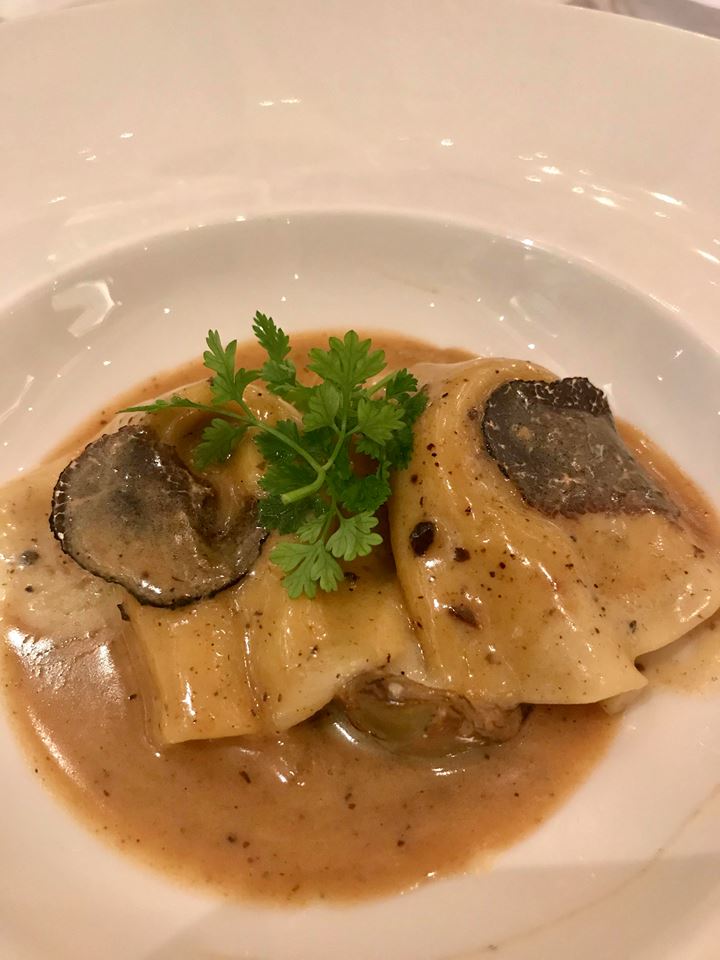 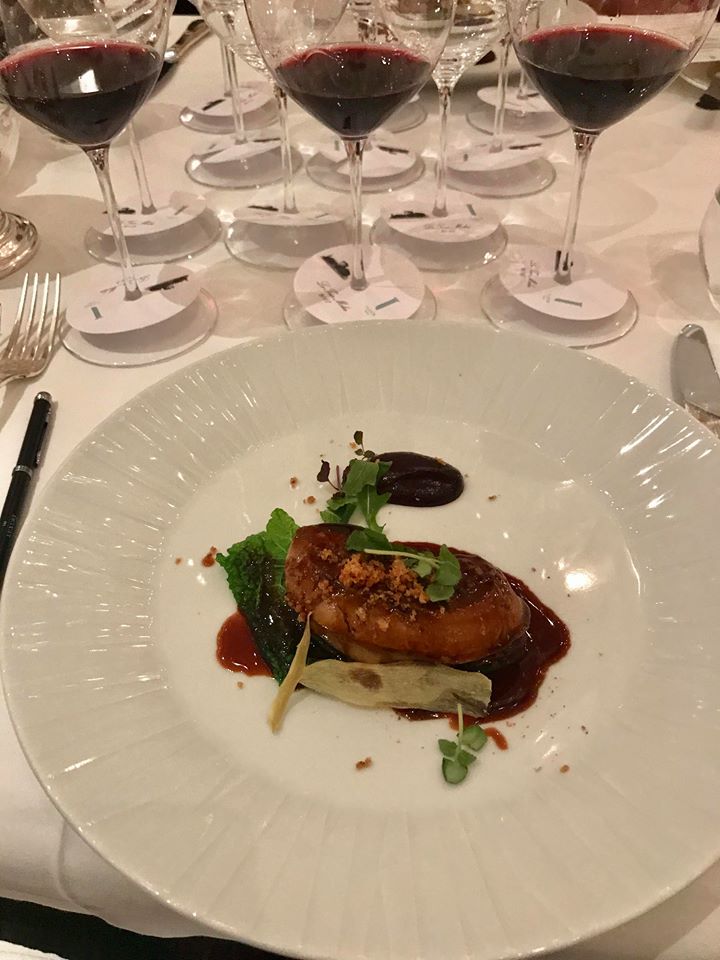 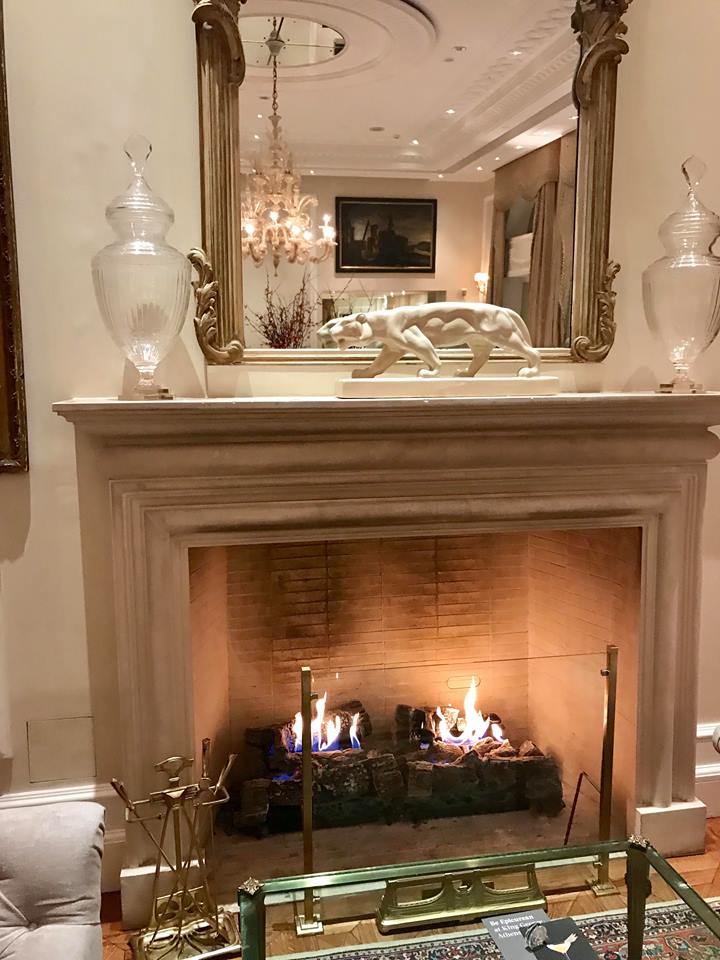