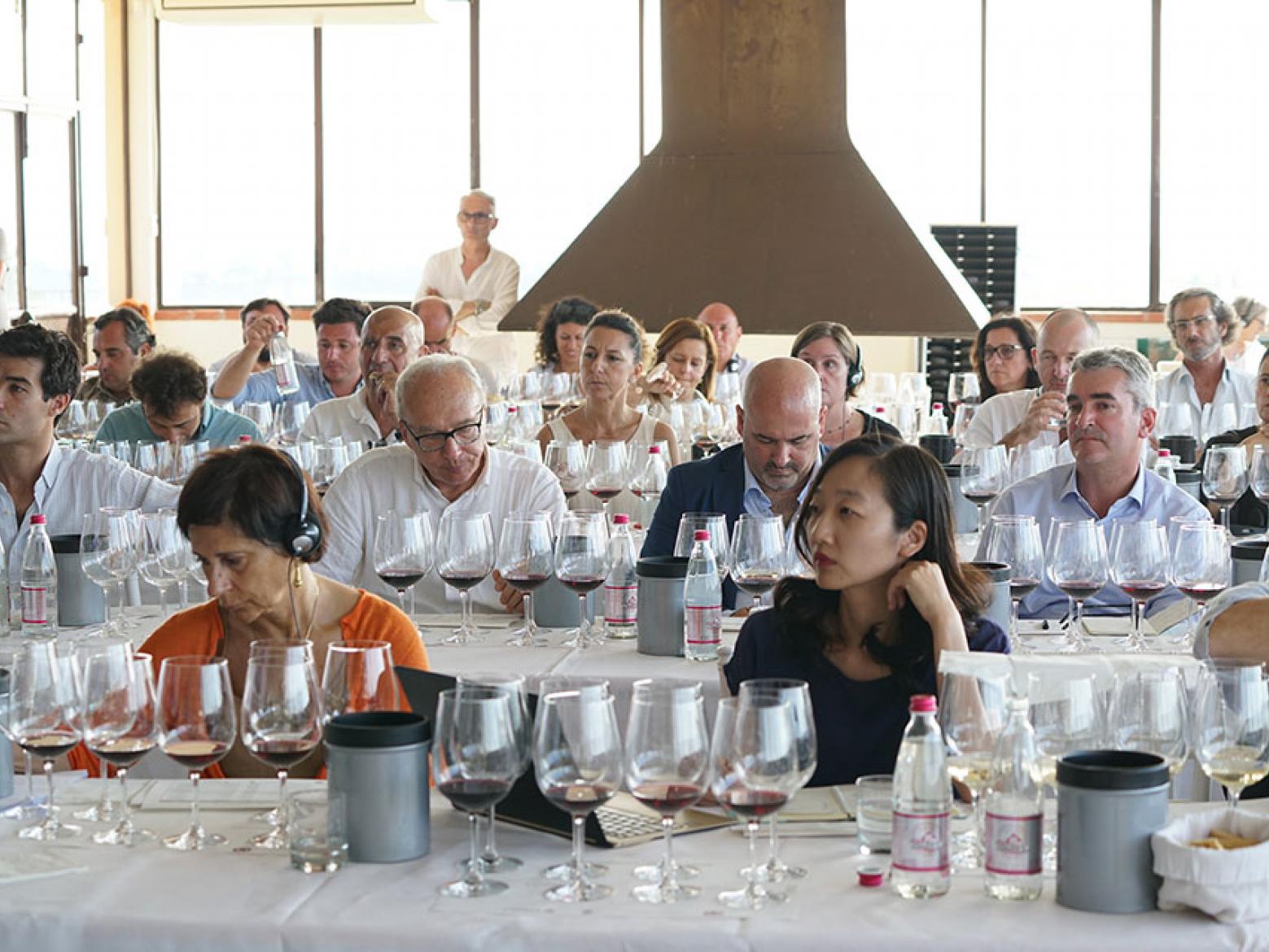 In Montepulciano with Enovitis In Campo

I adore Italy, and will always readily accept invitations whether to MW bootcamps or lectures. The amazing combination of an epic amount of history, unbelievable food, and wine culture and breath-taking scenery is what makes it irresistible. Also, the mentality of the people is so close to that of the Greeks, that many times we manage to communicate with just an exchange of a glance. This particular trip was my first time in Montepulciano, so I had all the more reason to participate in Enovitis 2019, where I had the pleasure of co-presenting a Masterclass with Daniele Cernilli (DoctorWine) on the influence of soil to the style and quality of wines.

What is Enovitis? It is the leading international trade fair for wine technology and innovation, which provides important opportunities for training, knowledge sharing and debate on the hot topics of the sector. This year there were 6000 visitors and the number of exhibitors rose to 170. It was also the first time workshops were included that focused on the relationship between vine and soil. For 2019, it took place in the evocative setting of Montepulciano (Siena), in the actual vineyards of the Tenuta Trerose winery (pictured below). Next year it will take place in Piemonte.

According to Ernesto Abbona, President of Unione Italiana Vini “the event highlighted the course that needs to be taken so that our wine increasingly acquires the value it deserves; we need to focus more on the identity and distinctiveness of our terroirs, a real added value that sets us apart from the rest of the world”. 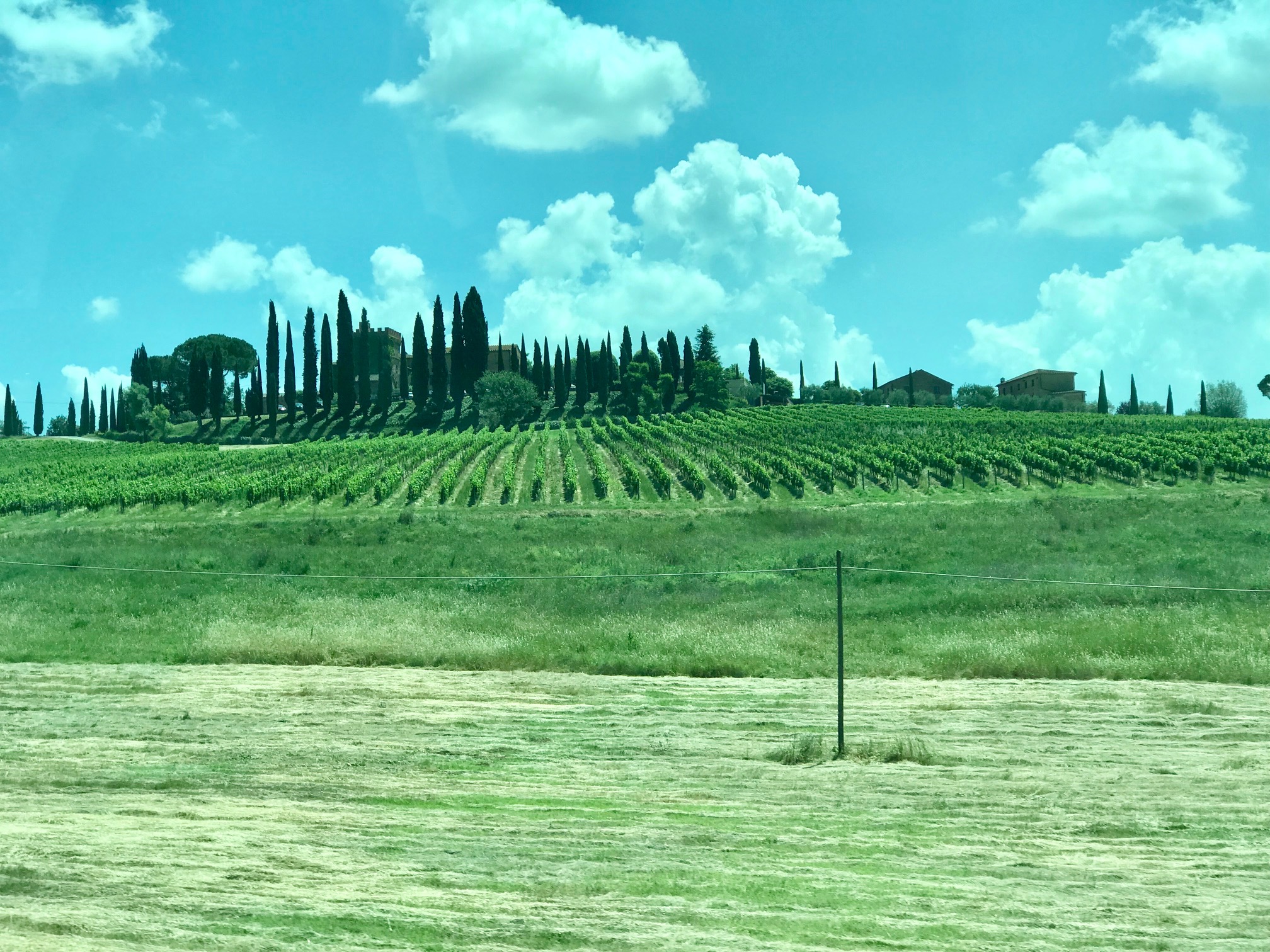 Back to the guided tasting now (picture below by http://www.civiltadelbere.com/). That was an idea that had been brought forward by the Chief Operating Officer of Bertani vineyards and MW Student Stage 2 Andrea Lonardi. My task was to present 8 wines from around the world, but with no Italian in the sample (the Italian wines would be presented by Daniele), with marked differences and with a strong soil fingerprint.

While we all agree that there is a strong relationship between soil and vine, this is a very complex one in which the soil influences mostly via its heat retention properties, availability of nutrients, drainage, poorly understood chemical properties, maturation and vine physiology. Yet, there is continuous interest in the influence of the soil and it is believed that when it is better understood the industry will develop better wines. While we often can taste the difference it is sometimes far too demanding to explain it. But it plays a key role in what we call authenticity in a wine and terroir expression.

Lonardi explains that there are a few grape varieties that seem to be strongly influenced by the soils more than anything else. ''Sangiovese, Pinot Nero and Nebbiolo are among the most representative examples for red grapes. Soils influence not only the morphology of the clusters but also the aromas and the flavors. Soils also influence the level of tannins and their structure. For some grape varieties one could “easily” guess the taste of a wine just by looking at the soil. The places where a single element of terroir is predominant i.e. the soil, are places where you can make wine with a strong identity''.

''There is clear progress within the Italian wine industry'', Lonardi continues, and ''Italian producers in the last two decades forced more the winemaking side and the global concepts of the appellation. With the Barolo Cru identification, something changed in the Italian scenario. Top areas right now are thinking about it .... but what I suggest is that every single area has to find its own way''. 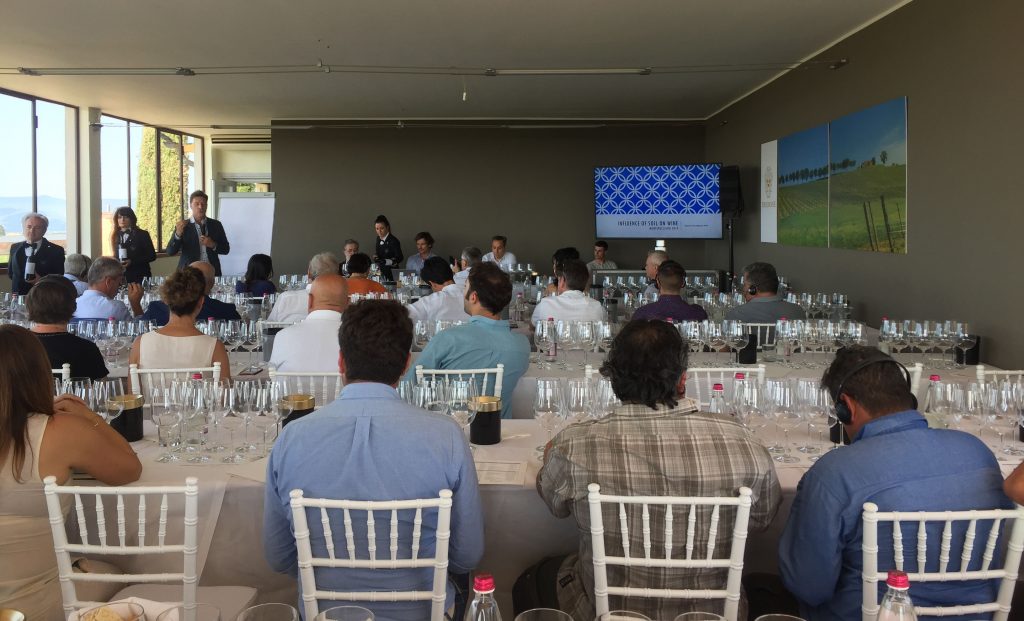 My presentation started with two Assyrtiko. One from the volcanic soils of Santorini, Karamolegos 34, which delivers dart-like precision and tension; that was tasted next to Mylonas from Attica, which has a more delicate, yet mineral character. A song of volcanic lava versus clay-sand with stones, both from old vines, although the vines of Santorini could be considered as far too old. My second flight consisted of two Sauvignon Blancs from one of my favourite Loire producers, Pascal Jolivet (Sancerre Sauvage vs Pouilly-Fumé Indigène ) and compared the classic limestone (terre blanche) soils of Sancerre to the silex soils of Pouilly-Fumé. More aromas from the first, more structure, body, and energy from the second.

My two red pairs were a game of Burgundy and Syrah. On the first one, I compared Pommard with Volnay presenting François Buffet Taillepieds, Volnay 1er Cru 2016 from limestone soils and Camille Giroud Pommard 2016 from clay soils. A very educative pair showing the silky character of Volnay vs the more robust one of Pommard, although that was not too obvious to everyone. The last flight was a Syrah from Qupé, Sawyer Lindquist 2016 from volcanic limestone soils, which was spicy with meaty undertones and grippy tannins due to the inclusion of stems. This was tasted next to a classic Rhône Les Trois Chenes, Crozes-Hermitage 2016 by Emmanuel Darnaud from pebble soils that showed more elegance and refinement. A very interesting duet with differences that were not so obvious, since Qupé’s style is also quite peppery.

Soil and its influence on wine is a topic much discussed and is very significant; it follows after climate and grape variety. While there is a talk about how limestone, schist, volcanic or granite impart aromas and structure, there is very little evidence (if none) that there is a direct aromatic influence. Yet, we taste greatness from wines that come from specific terroirs and soils, and we taste average results from more generic regions. That should mean something to all. 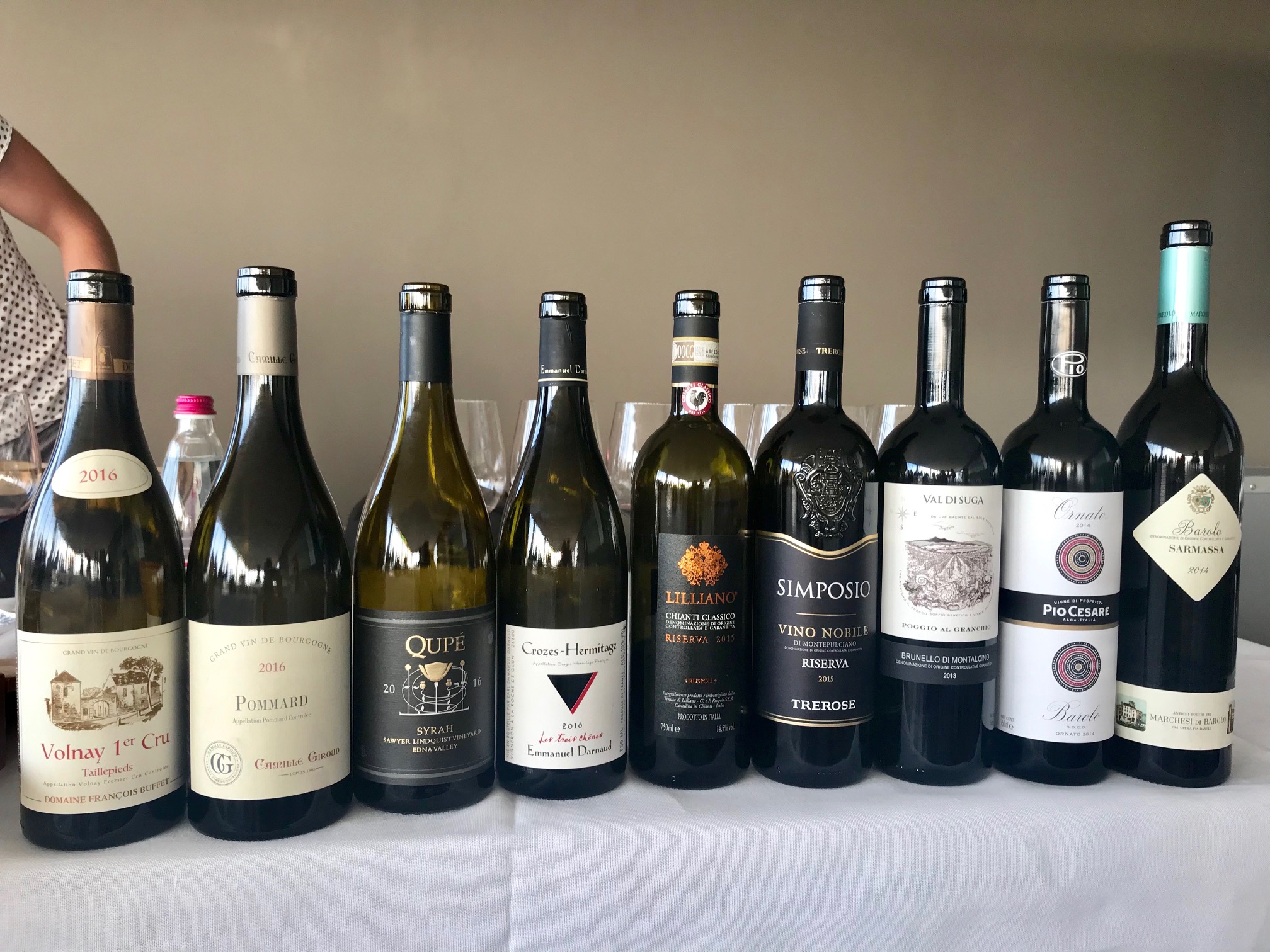 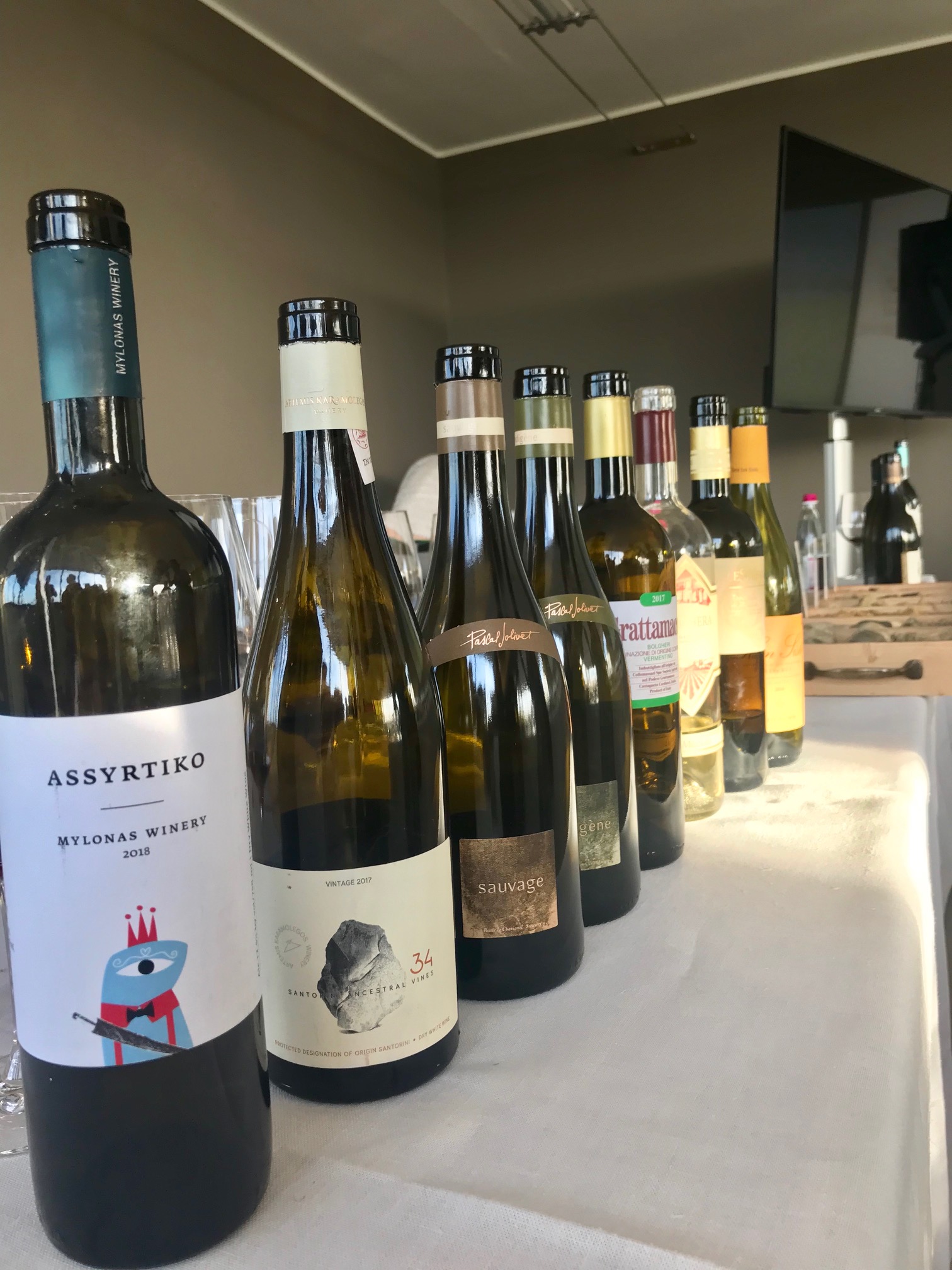