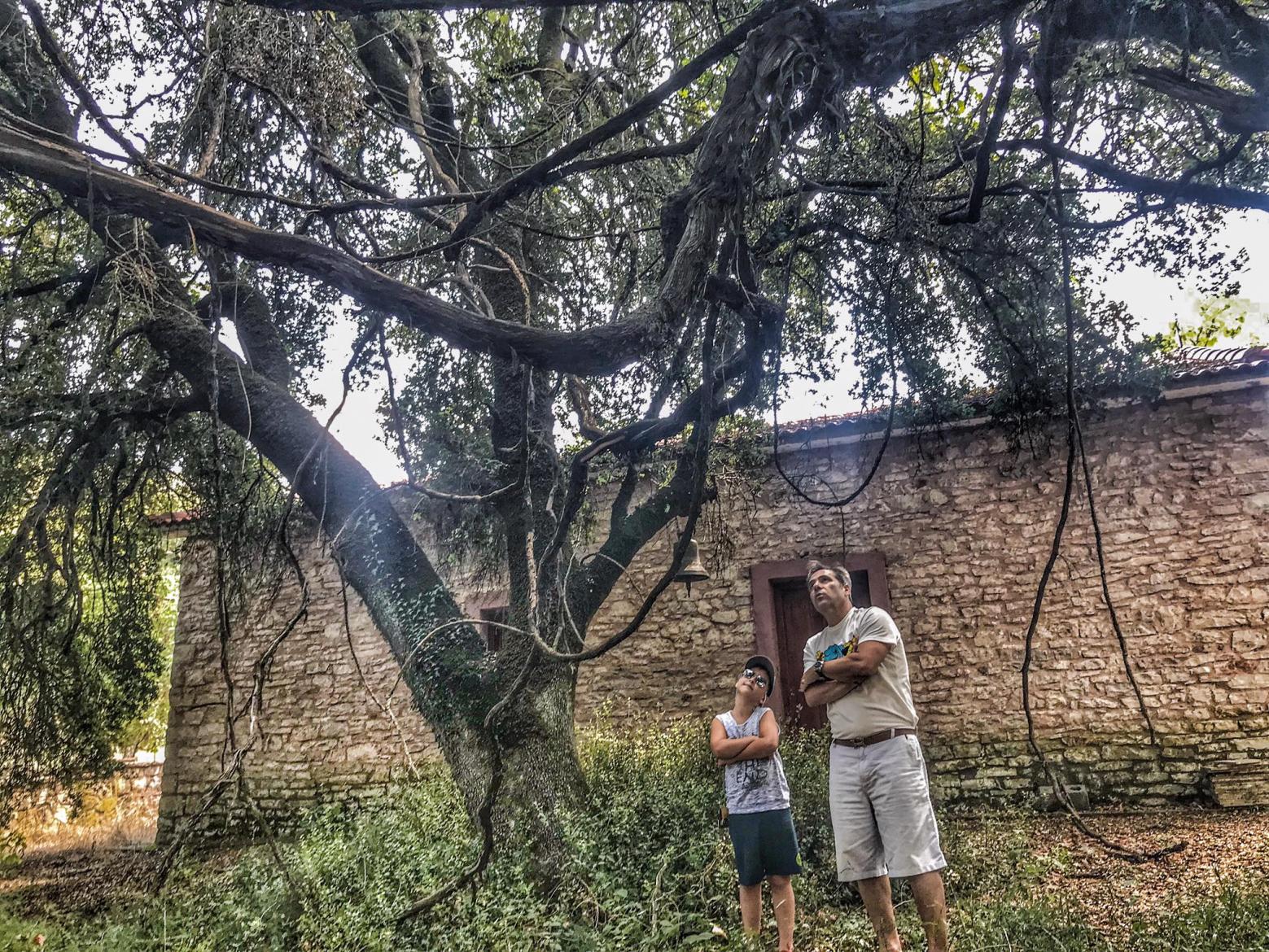 Τhe Mystery of the Pausanias vine

Over the next few weeks, I will be recounting unique stories of the Greek vineyard, that I have come across in my travels during recent years. These I will be sharing in both the English and the Greek section of karakasis.mw. Today, I will be beginning with the so-called Pausanias vine.

On the internet, there are scattered references to an ancient vine that Pausanias, the Traveler (110-180 AD), visited in 172 AD. According to tradition, he wanted to check the truth of a rumour about the trout in Aroanio River, which was said to sing like a wood thrush. In his book Arcadika (Chapter 21) he writes: “In Aroanio river there are fish, the so-called varieties, for which they say sound similar to the wood thrush. I saw these fish caught. Although I remained by the river until sunset, so the fish would start calling, as they say, I didn't hear them make a sound at all”. He is then said to have rested on a vine that impressed him (it isn't certain if there is a specific reference to this at some point in his work, or if this is held by tradition, which is just as important).

The Pausanias vine is located on the border of the Prefecture of Achaia and the Prefecture of Arcadia, between the villages of Pagrati and Zevgolatio, about 140 km from Athens. Two yellow signs indicate the road. In the summer, for obvious reasons, there is a Fire Engine located at the spot, so if you get lost with Google Maps, look for the Fire Engine. After so many centuries, what one sees are massive trunks of vine that have crept onto the trees in the courtyard of the church of Agios Nikolaos. It is said that the total length of the nine trunks exceeds 100 meters and the age of the vine is close to two, or even three, millennia. Each May it blossoms, but it never has any fruit.

Although the Pausanias vine is an important natural monument of the area, few things are known about it scientifically. However, a study published in 2013 (Food and History Vol 11, pp. 27-34) by Boursiquot, Lacombe, Laucou, Bakasieta sheds some light on the mystery of the Pausanias vine. The purpose of the research was to provide information about the viticultural heritage of Greece and possibly to shed light on the origin, course and evolution of the world's varieties. 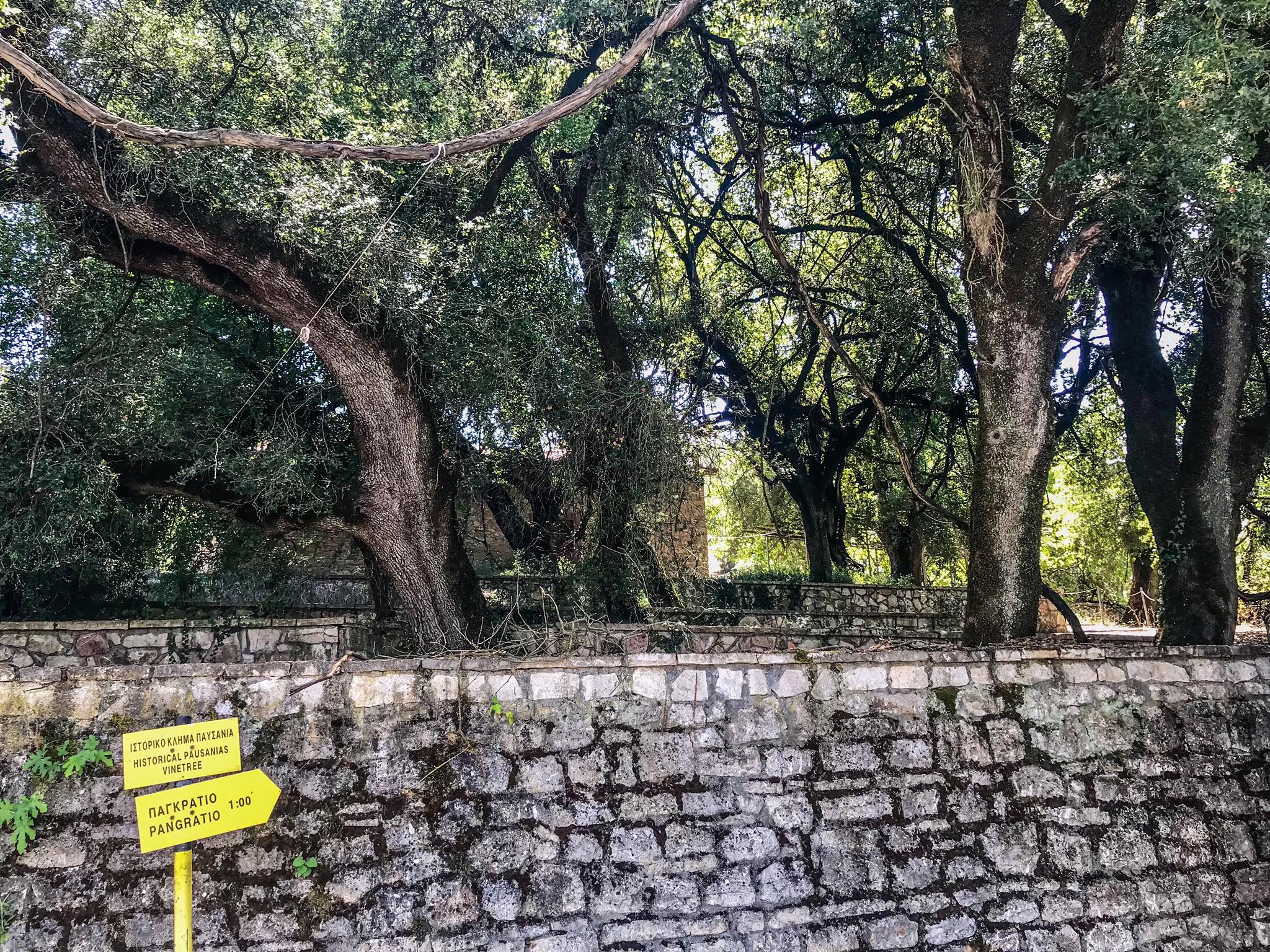 In the research, it is stated that historically Greece occupies a particularly important place in the development of viticulture and viticultural techniques throughout the Mediterranean basin. However, its role in the origin, selection and flow of vine varieties remains less known, except for a few cases, for example, the diffusion of Muscat à Petits Grains and Muscat d'Alexandrie around many Mediterranean countries, or Pavlos, found in Italy under the name of Malvasia Bianca Lunga.

Several authors have already reported this vine, but with brief descriptions and indications which are, at times, divergent. There is no historical data, to now, that allows us to date the first report of this vine. For these reasons, and with our current knowledge, the "Pausanias Vine" can, therefore, be attributed to a myth.
Genetic analyses were carried out. Twenty microsatellite markers distributed throughout the genome were studied for this purpose and comparison with 119 Greek varieties, and 762 species of wild vines were performed with the following results:

The vine belongs to the species of wild vine Vitis vinifera, the subs. Sylvestris and this is not an old variety.

The flowers are only 'male' which means that the vine is not fruit-bearing.

The comparison to all the varieties in the Vassal collection (over 3000) proved that the profile of the vine is of a unique and distinctive genotype.

In terms of its age, it is estimated at several hundred years, but it is difficult to determine it precisely.

Compared to other representatives of Vitis vinifera L., wild or cultivated, that exist today in the world, the "Pausanias vine" displays a particularly original genotype, probably resulting from "a limited number of sexual generations which have also undergone very few cycles of vegetative multiplication. In this regard, it is certainly a fascinating model for studies on the evolution and dynamics of the vine genome and, after all, we can say that the "Pausanias vine" stands somewhere between myth and reality.

Walking the line between tradition and reality, the Pausanias Vine continues to stand in the same place, for an indefinite number of centuries, waiting to reveal more to us in the future. 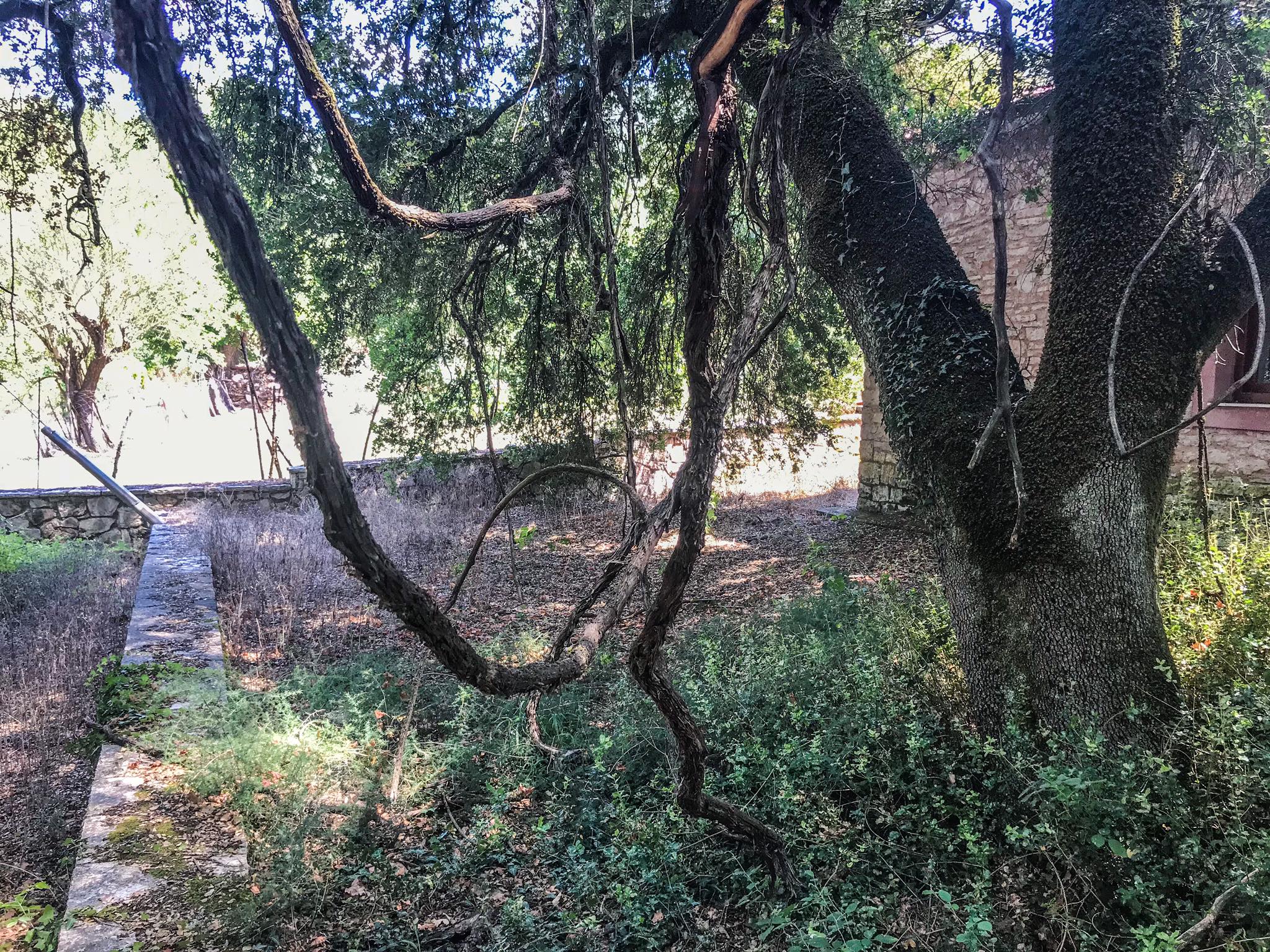 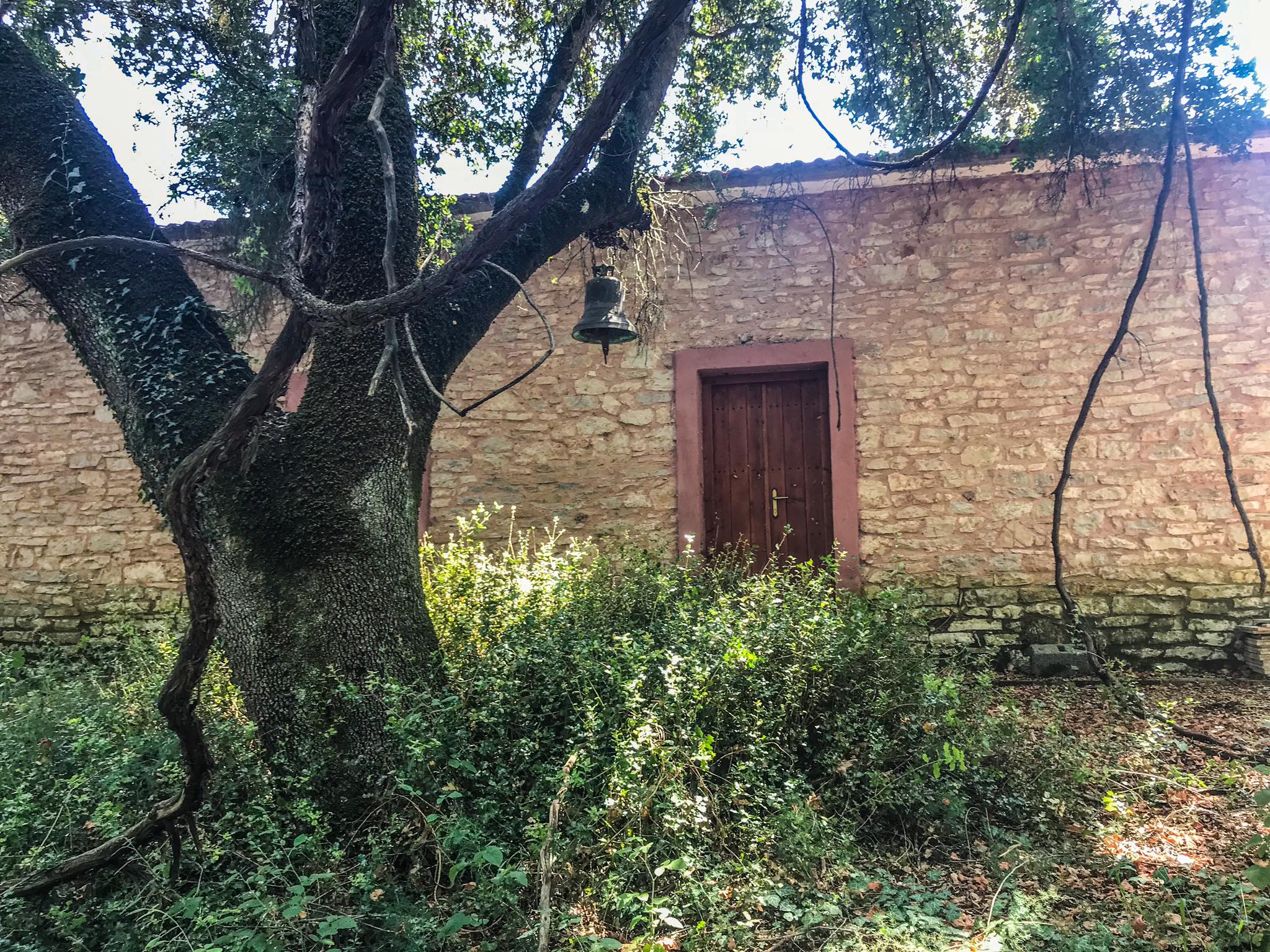