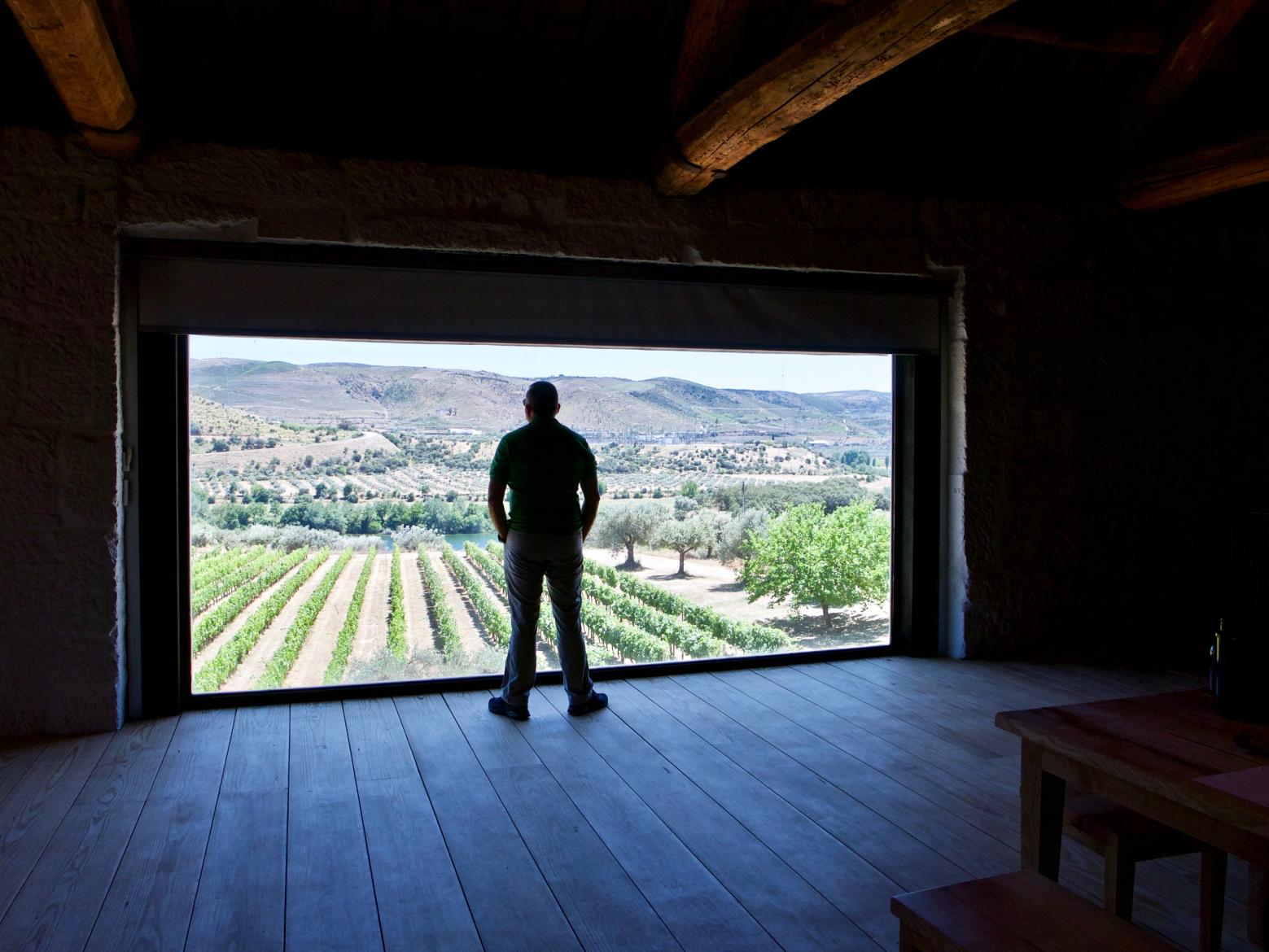 We reached Porto in the early morning, after having arrived in Lisbon from Athens late the last evening and flying out after 3-4 hours of sleep. Nick and I were both completely knackered but also amazingly excited. We had been waiting for this trip like crazy and nothing was going to spoil it for us. Not the one hour wait to get the rented car, not the terribly hot weather that we hadn’t bargained for at the end of May, not even our little squabble over which of us should have rushed into the car rental agency to get into the long queue. We had an appointment with Maria Ferreira of Quinta do Val Meão at 12:00 midday, and she had particularly asked us not to be late because she had other guests after us. It was going on 10:00, and we had a two and a half-hour drive to get there and, of course, to take up the rest of our quarrel!!

On top of everything, Nick had one over me, as I had stupidly forgotten my driver’s license. We hit the road, and very soon, what was around us made us forget our little dispute. Even though we were traveling on the highway and there wasn’t that much to see, we started getting an idea of what was to come. We arrived at the Quinta about twenty minutes late, because, despite the GPS, we managed to get lost inside the property itself. Our first impression was the stunning landscape on this meander of the river and the dry soil around us.

Given that we were driving up and down the farm to find our way to the main building, we had created a sand storm around us. When we actually arrived and got out of the car, the car looked as if we’d just returned from a drive in the sand dunes of the desert. We looked around us, and what we saw were fields upon fields of vines, a huge olive grove all topped with a significant part of Mediterranean wilderness strewn with green oak trees, juniper, cork trees, herbs, and undergrowth. Quite a sight.

Maria welcomed us with the most heart-warming smile. Quinta Vale Meão belongs to the Vila Nova de Foz Côa region and is part of the Douro Superior, near the borders of Spain. The property was acquired in 1877 by Dona Antónia’s second husband Francisco José da Silva Torres, when the Ministry of the Treasury auctioned 300 of the 700 hectares of Monte Meão, which belonged to the village of Vila Nova de Foz Côa, in an area encircled by a sharp bend of the Douro River. Of these 300 ha, about 90ha are vineyards, 40ha are organically cultivated olive trees, and the rest is protected woodland inhabited by an array of birds and animals. We are told that this area has three types of soil: schist (the most common and most significant part), granite and alluvial, which impart different characteristics to the different varieties.

Apparently, at the time of Dona Antónia, not only were the varieties mixed, but she had also chosen to plant vines and olive trees together on the terraces. Francisco Olazabal separated the varieties in the ’70s in order to be able to control quality, maturation, and the work needed in the vineyard, but also separated vines from olive trees as the olive trees were taking up the necessary resources and the vines were slowly dying. The Quinta is historically known for the first quality dry wine to be ever made in the Douro, the ‘Barca Velha’ produced in 1952 and released in 1956. At that time, creating a dry red wine of substantial-quality was unthinkable. The heat, lack of electricity and equipment, terrible roads did not help. He improvised a way of cooling the must by circulating it through a coil embedded in a cask full of ice. This ice had to be transported by trucks from Matosinhos, a harbour near Porto.

We go into the winery and are impressed by the old building. Maria, who speaks with great admiration of the Quinta, says: “This is one of the largest and most traditional cellars in the Douro. The roof is 140 years old, and it has been preserved exactly as it was in the days of Dona Antónia.” We have entered the area of the lagares, and she explains that nowadays, the lagares are smaller so that the different varieties are handled separately, except for the lagar for the port, which is the biggest, as all the varieties are fermented together. She explains how only the very best grapes will go into the wines and that the oldest vineyards are selected for the port. The winery has temperature controlled steel vats, and as we go down the 140 yr old staircase, we come into the area of the barrels. They have about 1000 barrels and use French oak from two particular barrel makers.

“Quality is what defines us, not quantity. We produce about 500,000lt of wine but only 300,00 bottles. We only bottle the best wines.” We continue up to the beautiful new tasting room, and Maria walks up to a large blind, which she starts to open while looking at our faces expectantly. And, she gets exactly the reaction she had been waiting for. A colossal window is revealed, which looks onto the vineyards, the olive grove, and the river. As we look through the window, it is almost like a picture with a frame. So, the tasting room looks onto the vineyard on the one side and onto the cellar on the other side, and this is under the 140 yr old wooden roof. I think this is one of the most beautiful tasting rooms I have ever visited.

The vineyards are planted at altitudes of 100-150m up to 300m for their most recent plantings. About 40% is planted with Touriga Nacional, and the rest is Touriga Franca, Tinta Roriz in about equal quantities and small quantities of Tinta Amarela and Tinta Barroca. They have also planted experimental parcels of old ‘forgotten’ varieties (Tinta da Bairrada, Tinta Francisca, Cornifesto, and Rufete). The white varieties are Rabigato and Arinto. The winemaker is the son of Francisco Olazabal, also Francisco but known as ‘Xito.’ He is also winemaker of Quinta do Vallado, a member of the Douro Boys, and has teamed up with two close friends for a project in the Dão region, known as M.O.B (Moreira, Olazabal, Borges). He uses organic practices (no weed killers, cover crops).

We begin our tasting with the white Meandro 2018. 60% Rabigato, 40% Arinto. No malolactic fermentation, seven months lees contact. I am surprised by the freshness of the wine coming from such a warm region. Aromas of sweet lemons and pineapple. They make around 10,000 bottles, all of which sell out in Portugal.

Meandro red 2017. 45% Touriga Nacional, 33 % Touriga Franca, 15% Tinta Roriz, 5% Tinta Barroca, 2% Alicante Bouschet. Aged in 2nd and 3rd year Allier barrels for 14 mths. Nice deep colour, crunchy red fruit, lovely acidity, alcohol of 14% that is well integrated. The price at the winery is 11 euros, which I find excellent for the quality of the wine.

Quinta do Vale Meão 2016. Maria presents this to us with great pride, and when I comment on this, she says: “You won’t believe it, but this is one of the best wines in Portugal. 55% Touriga Franca, 35% Touriga Nacional, Tinta Roriz and Tinta Barroca, from the oldest parcels, aged 60% in new barrels and 40% used. In ten years, this will be amazing. 2016 is already out of stock!” I feel lucky to be tasting the wine, and she is right. The wine is very sophisticated and elegant, with both red and dark fruit, herbs, freshness, and a long finish.

Quinta do Vale Meão Vintage Port 2016 I’m no port expert, but this wine was lovely. Dark fruit, concentration, texture, elegance, freshness, and length. Obviously too young to drink.
We could not taste a tawny port because they haven’t been marketed yet.

We also tried the olive oil, which was quite different from the olive oils of Greece as the varieties are indigenous to Portugal (Verdeal, Cordovil, Cobrançosa, and Negrinha do Freixo). Crystal bright fruit, balanced pungency, and a tasty bitterness.

We left Quinta do Vale Meão much happier than when we arrived. A lovely first experience to the Douro Valley. If I were to define this Quinta with one word, I would say elegance. 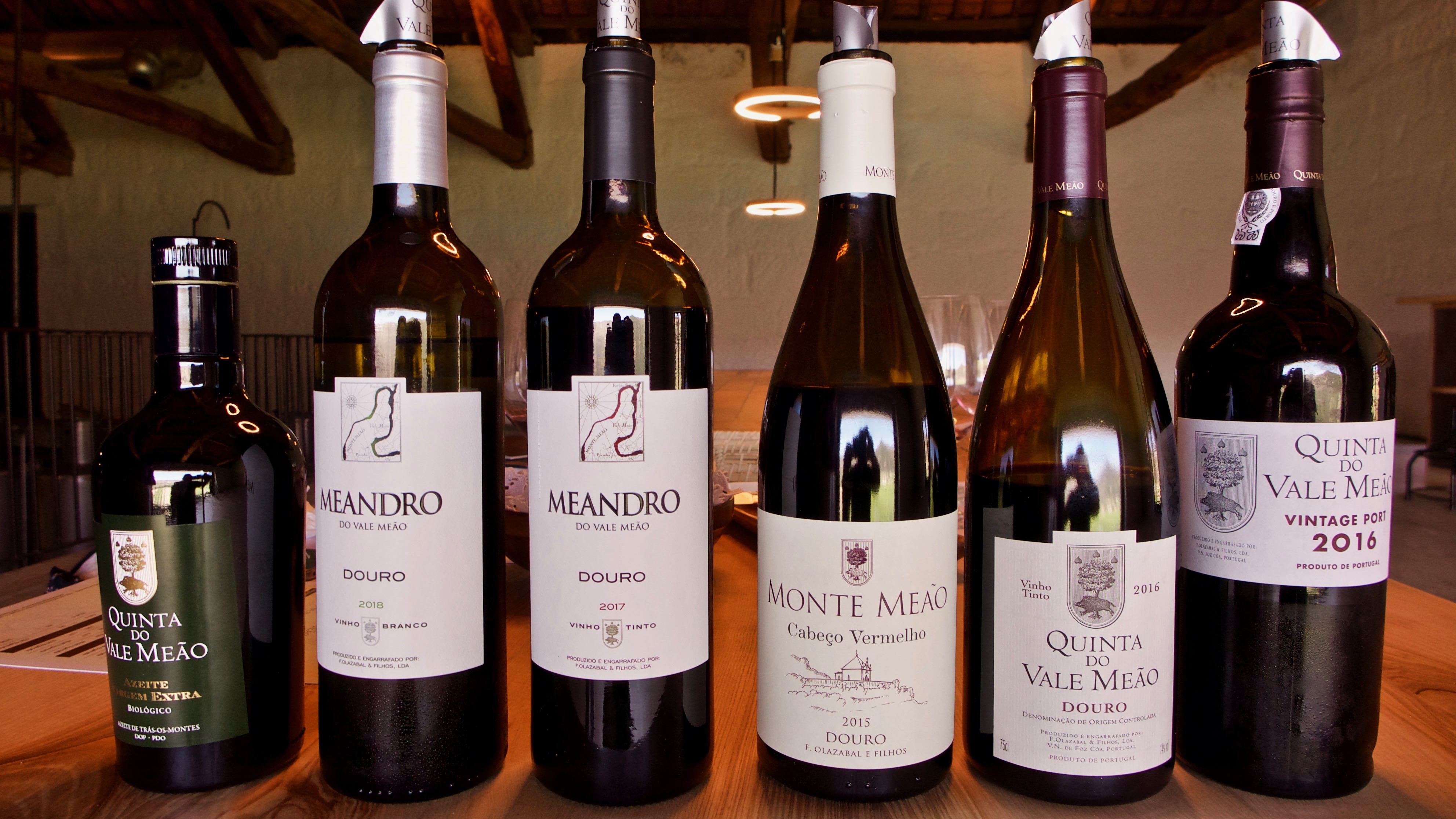 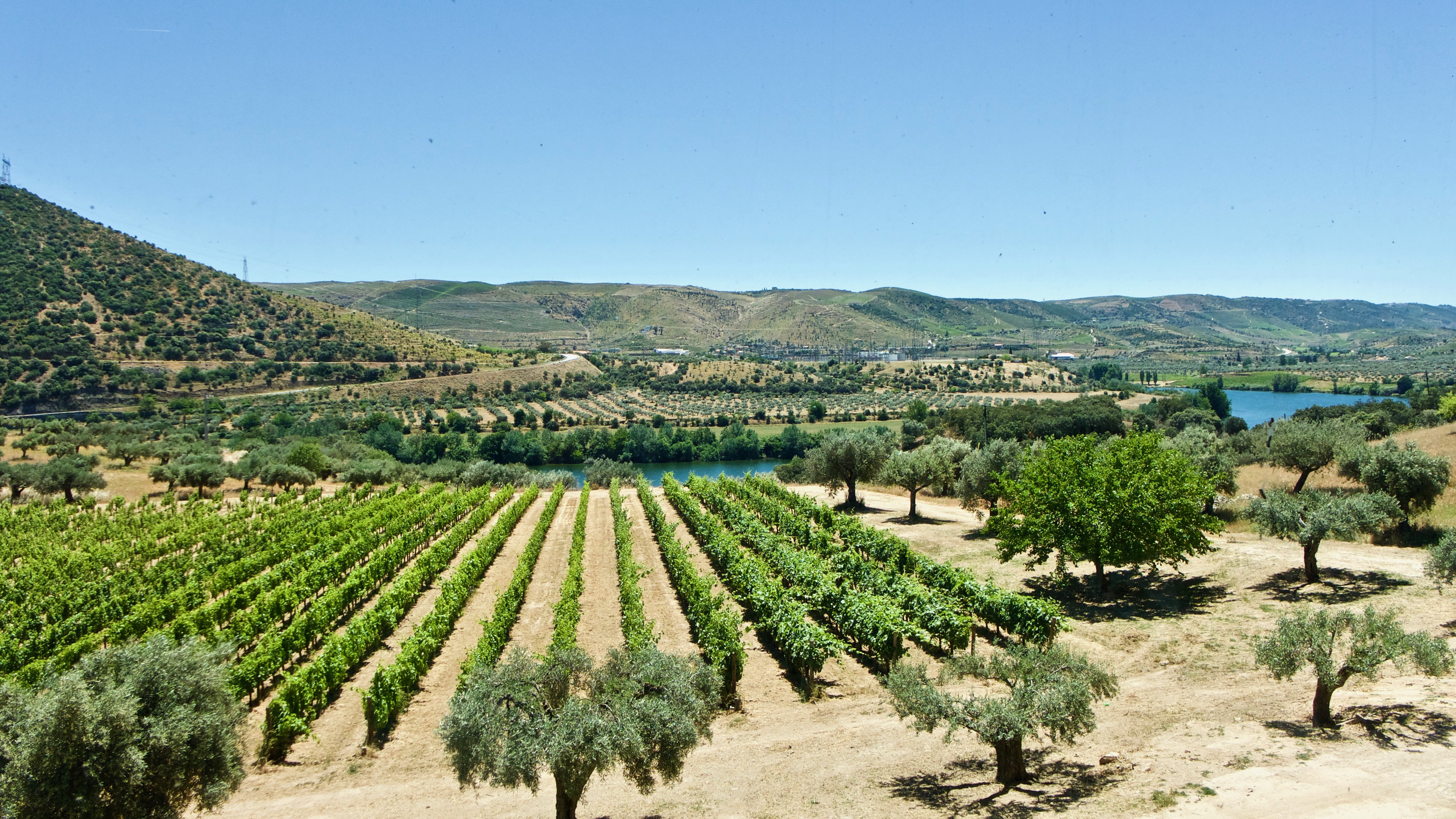 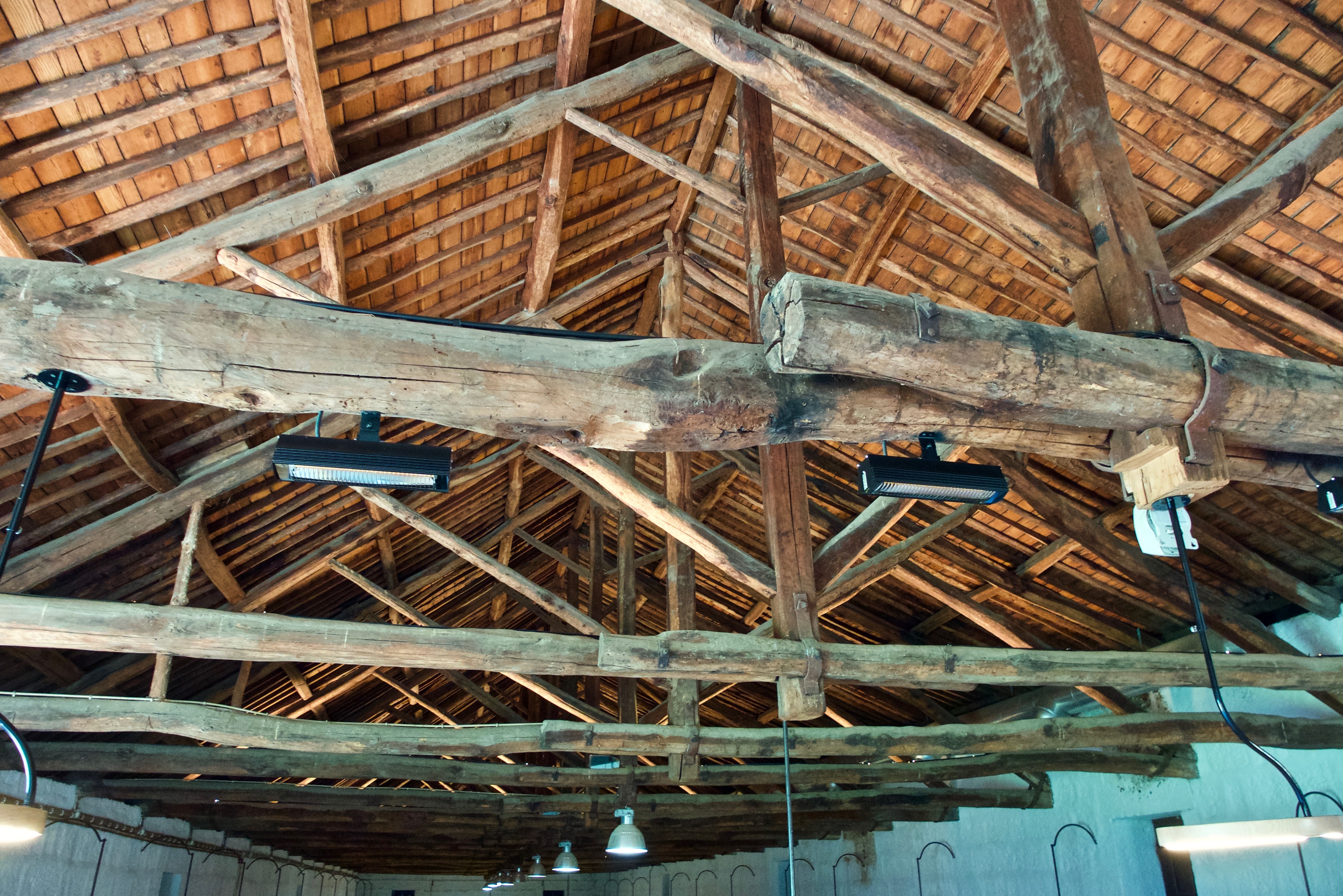