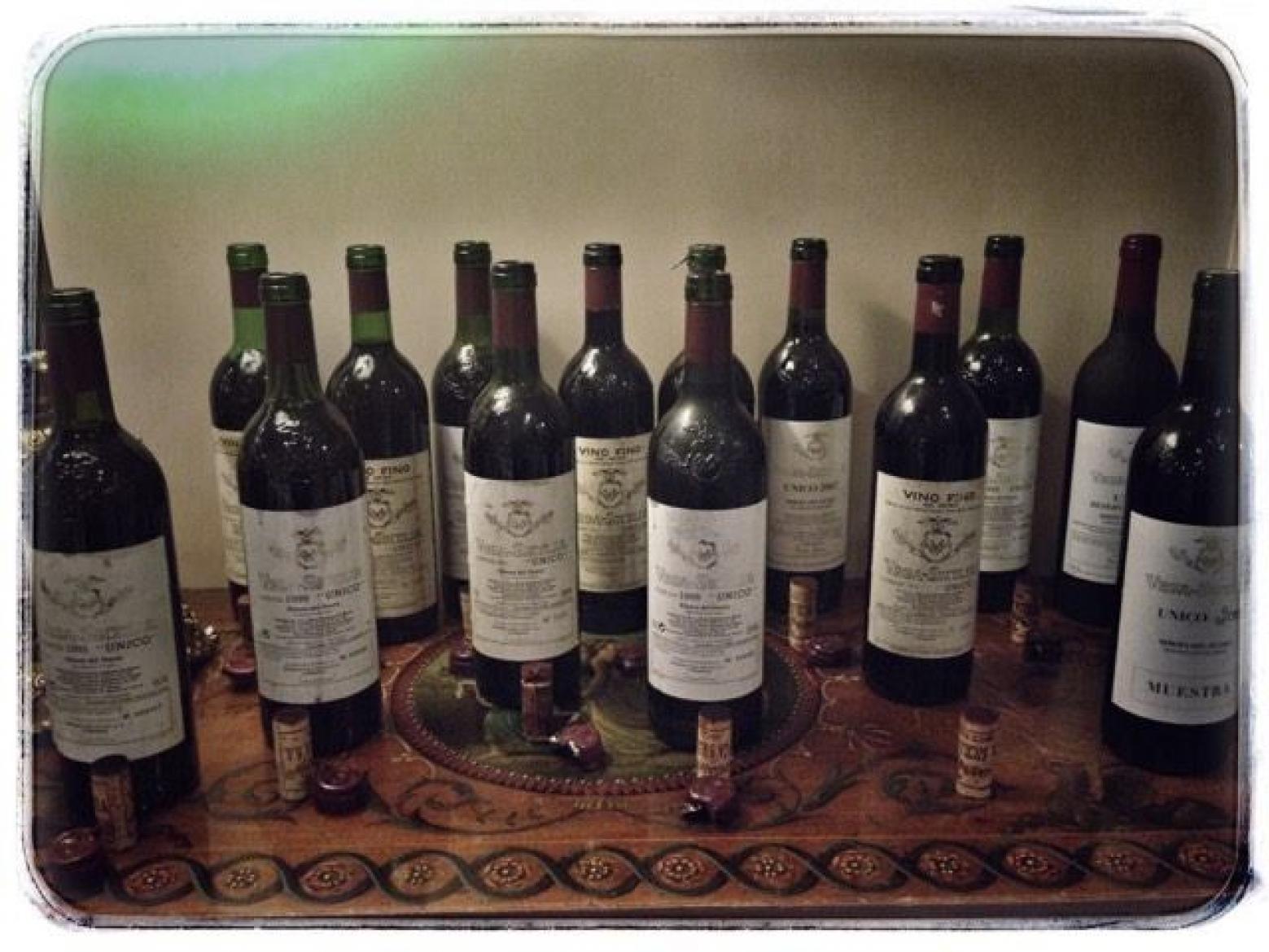 15 vintages of Vega Sicilia Unico, the Grande Bretagne private cellar and some lucky few: a magical wine tasting had just begun! Since 1982 Vega Sicilia has changed hands to Alvarez family with Pablo Alvarez as its current CEO. Starting from 1953, we represented six decades of Vega Sicilia Unico organized in four flights by talented Head Sommelier Vangelis Psofidis and paired to perfection by the precise dishes of executive chef Sotiris Evangelou. And if this wasn't enough, the night had a little bit more stardust as our guest of honour was Elisa Kwon de Alvarez, Pablo's Alvarez spouse.

Unico is beyond any doubt the crown in the jewel of Vega Sicilia wines and wineries that also include Alion, Pintia, Macan and Oremus in Hungary. It carries the reputation of one of the most ageworthy wines in the world on par with the first growths of Bordeaux.

Elisa Kwon de Alvarez who is currently working on her theory part of the MW exam, having successfully passed the practical section talked about the history and the factors that make Unico such a unique wine. The winery was founded in 1864 and has been owned so far by four families with the Alvarez family being in control since 1982. This is the year that Ribera del Duero acquired its DOC status. At that time there were just 14 wineries in the region, now approximately 300 exist.

Out of the nearly 1,000 hectares that make up the Vega Sicilia estate, 210 are used to grow vines and only 40 are used to produce Unico; the rest source grapes for Valbuena and Alion. ''There is an almost magic element in the estate, something very special that one can see it starting from the berry weight, in Unico it is 1.6 grams while in Pintia (sister winery in Toro) it is 2 grams'' Elisa explained. She also emphasized on the attentive work in the vineyard and the rigorous selection that takes place during the harvest.

The entire vineyard is structured into 52 plots based on grape variety, age of the vines and the 19 soil classifications found on the estate. The minimum age of vines is 10 years old, the average in production is 35 while there are patches planted back in 1910 that are used to select clones working with a top nursery in Burgundy. So far Vega Sicilia has isolated, according to Elisa, top quality clones of Tempranillo that no-one has in Spain and the world. 20 clones have been identified over a two - decade period and next stage will include matching of rootstock with the specific clone.

Each plant – vine density is 2.222 vines per hectare - produces 1 to 1.5 kilos of grapes giving a total production of approximately 120.000 bottles (Valbuena is 200.000 bottles and Reserva Especial another 15.000). Fermentation is spontaneous with isolated yeasts while the greatest danger is spring frost. In this decade only one vintage was lost, 2001, but in the previous ones up to 3 vintages per decade were the norm, a big loss by all means. When temperature reaches -5 degrees Celsius everything budded in May is destroyed and a second crop does not have the quality to produce Unico, so it ends to Valbuena. The estate owns 15 wind machines that can protect up to -2 degrees Celsius, each costing approximately 150.000 Euros.

Vega Sicilia does not use any more concrete as according to Elisa Kwon de Alvarez the high pH of the grapes (goal is 3.6-3.7 but 3.8 is common) in not an ideal factor to work with concrete. Instead wooden tanks are used and after MLF the wine goes through what is probably the world's longest combination of maturation and ageing period of a red wine. That is almost 10 years between wood and bottle. The different stages take place in different types of barrel: American and French wood, new and used barriques, 20.000-litre vats, each batch is what determines the type of wood and the time spent in each container. It will normally spend 6 years in wood and 3 in the bottle and can be considered as the opposite of the en primeur system rewarding a long process of waiting for excellence.

Unico remains true to a clear and well-defined style, with an inimitable character and style; elegance, strength, ageing capacity... A unique and timeless taste that has elevated it to among the aristocracy of the great classic wines.

Furthermore, the qualities of the Tempranillo and Cabernet Sauvignon that consist the majority of the blend in different proportions are assembled to perfection in this wine. Each provides a differentiating factor that makes the wine great in every vintage. 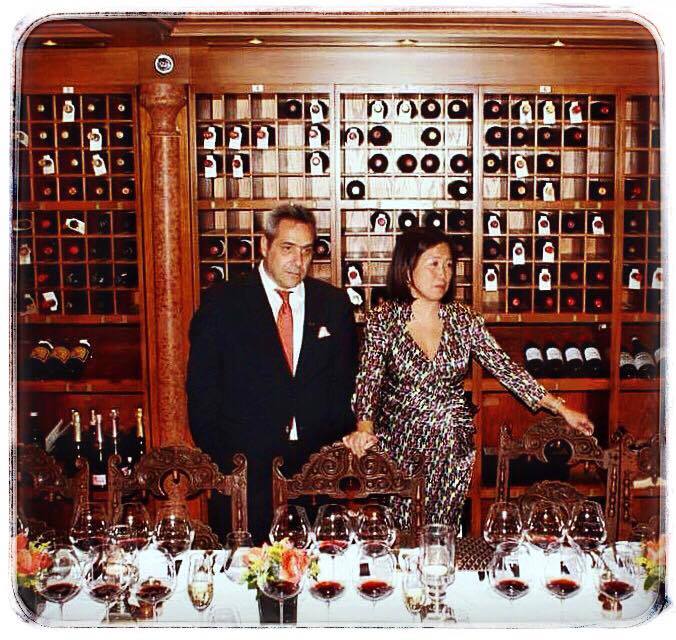 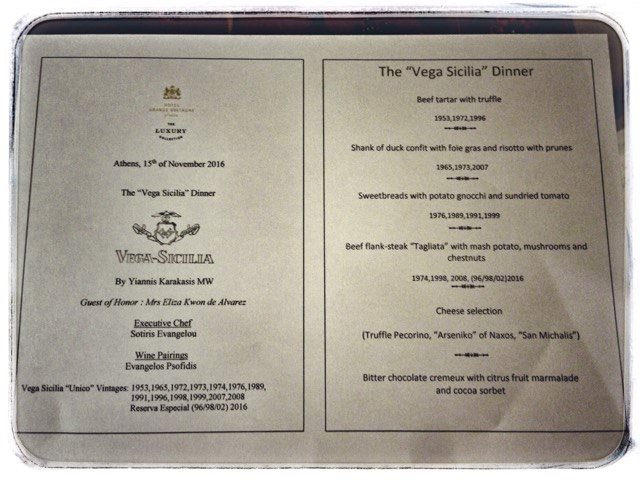 The wines were presented in four flights, each including mature and more youthful wines to offer opportunities for comparing and discussing styles and evolution. Tasting notes provided by two excellent tasters Stefanos Tsalavoutas and Nikolas Giannopoulos that are also Diploma holders follow but before that I would like to summarize my idea of Unico after this brilliant opportunity.

Unico can be defined by its components, that is classic beauty as we know it from the ancient times, elegance, and tremendous ability to age. It is a detailed synthesis of numerous elements in the vineyard aiming for perfection. It is reasonable in such a tasting to anticipate a turning point where things have changed and this was identified in 1989 vintage with more emphasis on fruit purity, and refinement of tannins. The style perhaps becomes more modern but this is followed by top notch quality.

That was a brilliant start with an amazing wine. Ultra complex nose with cedar, abundance of black and red fruit, espresso coffee and forest floor nuances. Youthful but already approachable with juicy tannins and sweet fruit. 95/100

A fully developed Unico earthy, leathery with hints of graphite and black olives on the nose. Medium bodied and still delicious for its age. 92/100

1953 was among the stars of the night. Fantastic complexity on the nose with sweet spices, jammy red and black fruits and medicinal hints. Velvety with real flesh and a lingering finish. 80% Tempranillo, 15% Cabernet Sauvignon and 5% Malbec and some white varieties, produced in 30.000 bottles. Perfect match with the beef tartar! 95/100 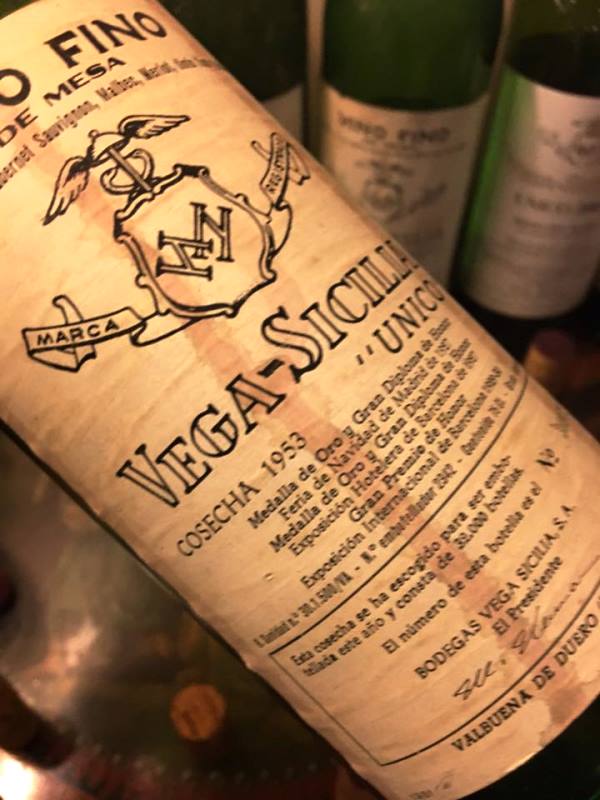 Refined and soft on the palate, spicy and floral with balsamic and herbal notes. Textbook, oxidative and classic Unico. 92/100

Not the best vintage for Unico and for sure not a great bottle in our glasses. 89/100

A fascinating vintage showing the new style of Vega at its best! Purity of fruit, smoky new oak, cedar on the nose. Stylish with lots of elegance on the palate, firm structure but again quite approachable although it may evolve over decades. A wine that makes a statement by its balance rather than by its power. 94/100 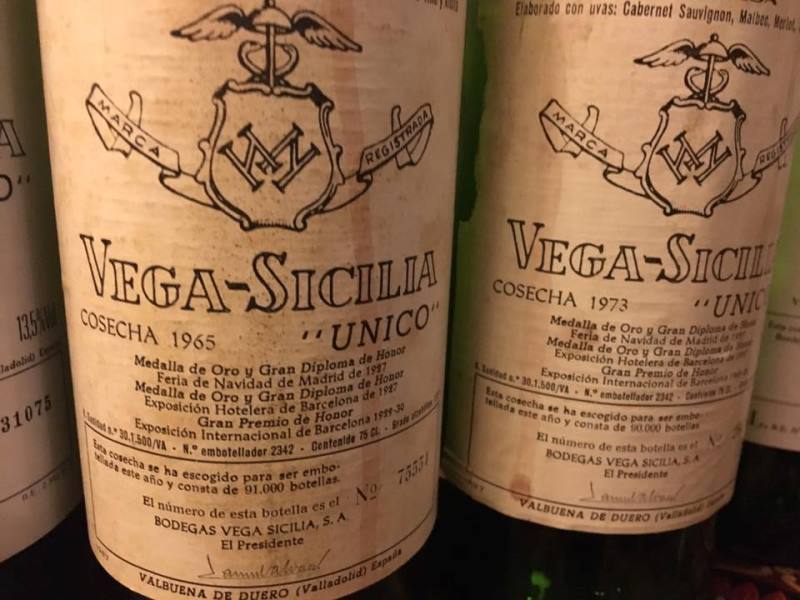 Nicely developed with earthy and medicinal/balsamic notes yet less complex than the 53 or 72 from the first flight. 91/100

Youthful wine similar stylistically with the 2007. Firm with noticeable tannins and fresh acidity balancing the ripeness of fruit. 93/100 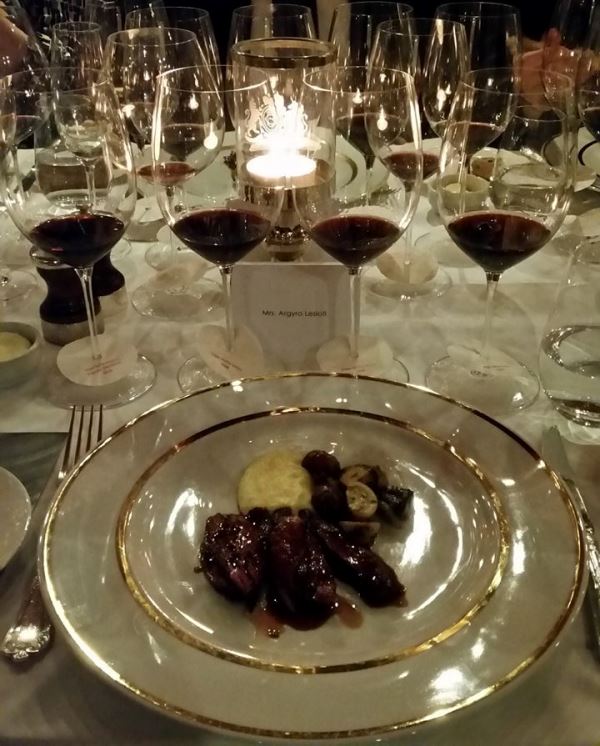 Fully developed as we expected at 42 years of age with dried leaves, exotic spices and leathery notes. Refined and silky this is holding very nicely. 92/100

Wine of the night #2. Full bodied, powerful wine with solid tannins and intense oaky notes that are well supported by fruit's concentration. Very much like a top right bank Bordeaux. 97/100

Last but not least the new release of Unico from 2005 vintage made its appearance, offered by Vega Sicilia and Elisa Kwon de Alvarez. A stunning wine with perfect balance and the best way to conclude a memorable dinner. Wine of the night #3 flirting with perfection. 99/100. 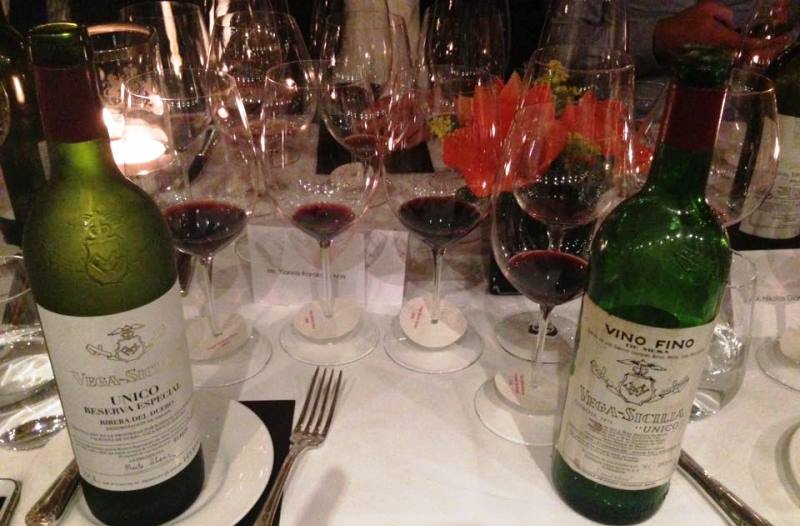 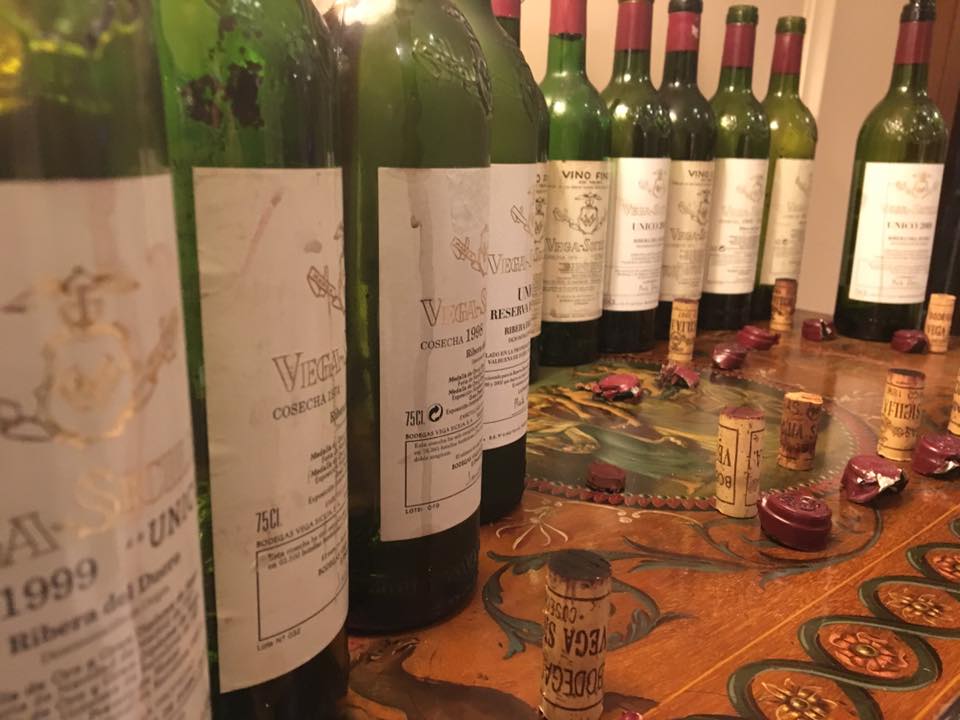