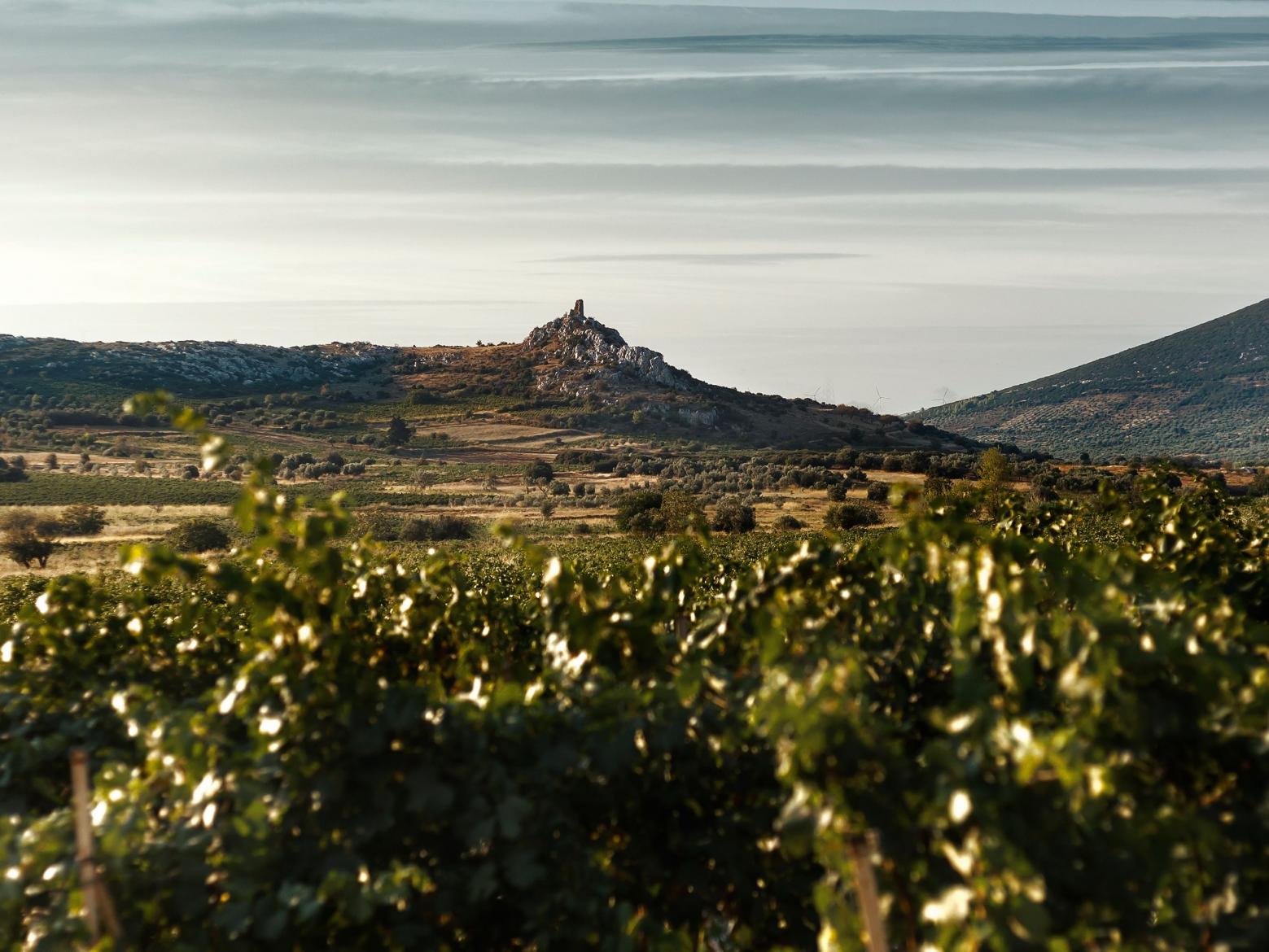 It would be very difficult to write about Boeotia and its wines without referring to the mythological and historical wealth that comes with it.

The poet of Theogony, Hesiod, was born in Askri, the Nine Muses inhabited Mt Helikon, Cadmus was the first king of Thebes, Mt Cithaeron is connected with Oedipus who was abandoned there (solved the riddle of the Sphinx, killed his father Laius, was given the throne of Thebes and the hand of his mother Iokaste - unbeknown to him), Dionysus who carried out his rites on the mountain and Hercules who killed the Lion of Cithaeron,  just to mention a few. History tells us that the Battle of Plataea was a decisive Greek victory against the second invasion of the Persians, the Battle of Leuctra ended Spartan power, in the Battle of Chaeronea Thebes was taken over by Philip II, later went under Roman rule and flourished during the Byzantine era. Scattered with important ancient remains, an Archaeological Museum in Thebes and one of the oldest Byzantine monuments (the Μonastery of Osios Loukas near Distomo). With all this comes a long tradition in winemaking.

The region has three PGIs (Thebes, Slopes of Cithaeron, Retsina Thebes). I selected better and lesser-known wineries that cover different parts of the region. In Part 1 of the presentation three wineries from the middle to the west of the region and in Part 2 three more in the southern and eastern part of the region. Included are tasting notes of two wines from each.

Founded by grandfather Nikos in 1946, modernised by his son Thanassis who also preserved Mouhtaro from extinction, has now been passed on to the third generation Nikos, Stelios and Panagiotis. The winery (open to visitors), located in Askri, was one of the first to bottle wines in 1990, and was renamed Muses Estate in 2005. They cultivate 60 ha of land (owned and contracted) and produce around 300,000 bottles. Nikos, who is the winemaker, explains that the temperature in the Muses Valley (pictured above) is 3oC lower than that of surrounding areas due to the cooling winds from Mt Helikon, “we are almost last at starting the harvest compared to other areas of Boeotia”. The vines are on a slope going from 400 m up to 600 m, they have some wire-trained more recent plantings but most of the vines are old (Mouhtaro ~70yrs, Savatiano ~50-60yrs goblet-shaped), unirrigated, low producing, with enough natural aeration to protect the vines, so they farm sustainably and are environmentally conscious about protecting their microclimate. The soil is described as clayey-loam higher up, ‘heavier’ lower down, but generally with much diversity. I ask what they mean by saving the variety of Mouhtaro (pictured below) and he says: “Mouhtaro was cultivated everywhere around here, but it is not an easy variety. It has high acidity, is quite productive and didn’t ripen well. People here mostly drank white wine, as the reds were not too palatable, and Mouhtaro was slowly abandoned. My father systematically experimented with the variety and realised its potential”.

They grow Lefki Koundoura (Savatiano clone), Malagousia, Assyrtiko, Chardonnay, Sauvignon Blanc, Trebbiano, and recently Gewurztraminer, of the white varieties and Mouhtaro, Cabernet Sauvignon, Merlot and Syrah of the red varieties. “We have two separate identities. One is only indigenous varieties and one aimed at export markets, a combination of international and indigenous varieties”. In the winery, the whites undergo cold-soaking, only free run and 50% of first press juice (the rest goes to their beautiful ‘Lost Lake’ distillery), and battonage, whereas the reds undergo pre-and post-fermentation extraction and no pumping. “Our whites are aromatic, with freshness and ability to withstand time and our reds are not too tannic, well structured on the palate and Mouhtaro has very crunchy fruit because of the mountain. I’m experimenting with native yeasts, alternative ways of vinifying and traditional-method sparkling wine”. 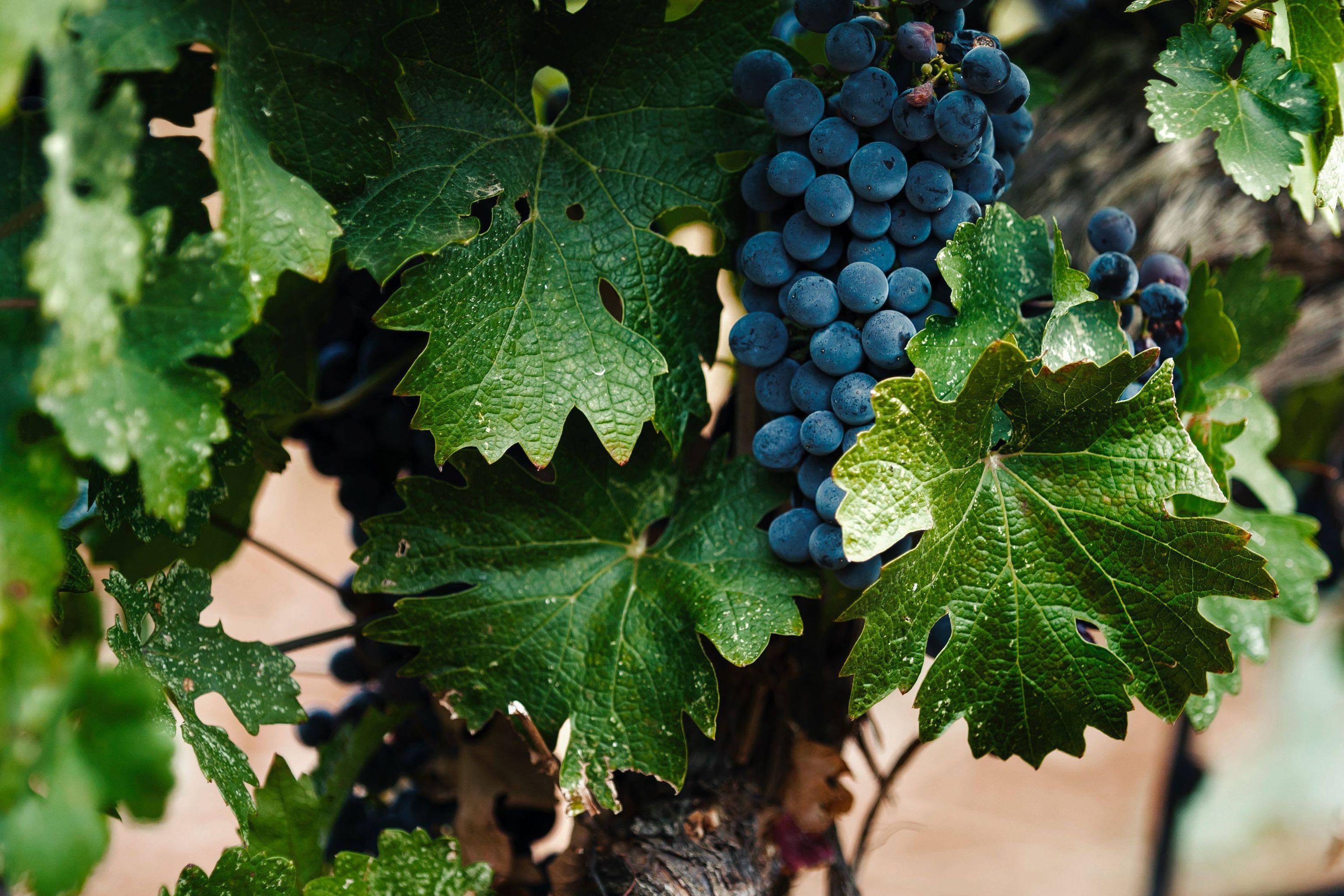 The winery (open to visitors) is located in Vagia and was built in 2005. “From here we can see Mt Helicon, Mt Cithaeron and Mt Parnassus”.The vineyard is in Paliampelos at the foot of Mt Fikion, (home of the Sphinx). I spoke to 3rd generation grower/winemaker Panagiotis Katrisiosis. He owns 40 ha of which currently 18 are planted and produces around 30,000 bottles, “I don’t want to make more wine than I can feasibly distribute”. Cold winters, warm summers with large diurnal variation and two gorges close by, “the one in the north is directed towards Evia and the other south towards the Corinthian gulf, which means the vines are well aerated”. At 300-350m altitude on a slope. He actually consulted a soil scientist from France before planting his east to west facing vineyard. The soil is described as poor, stony, sandy-loam and I am told he finds both black (volcanic) and white stones. He farms Roditis, Assyrtiko, Malagousia and Sauvignon Blanc of the whites and Mouhtaro, Cabernet Sauvignon, Cabernet Franc and Syrah of the reds. Sustainable (bordering on organic) farming, with use of own made compost, use of copper and sulphur for disease control and pheromones for insect control. “I strictly control my grape production because I want the best possible fruit, we harvest from 04:30-10:00 am so the grapes are cool, we cold-soak, and I'm experimenting with different types of vats and native yeast fermentations. My red wines ferment in barrels, 225 lt and 500 lt oak of up to 4th use”. They have a Mouhtaro 2015 in the pipeline, that hasn’t seen the market yet, fermented with native yeasts and 18 months in oak.

60% Syrah 40% Cabernet Sauvignon, tank-fermented, aged 16-18 mths in barrel. Mainly black fruit, with intense blackcurrant and capsicum aromas, violets, black pepper. Medium alcohol, rather full body with fine-grained tannins. A wine that I would have mistaken for Chilean on the nose, without the intense concentration that usually goes with Chilean wines. Nicely balanced, well crafted, with good length. 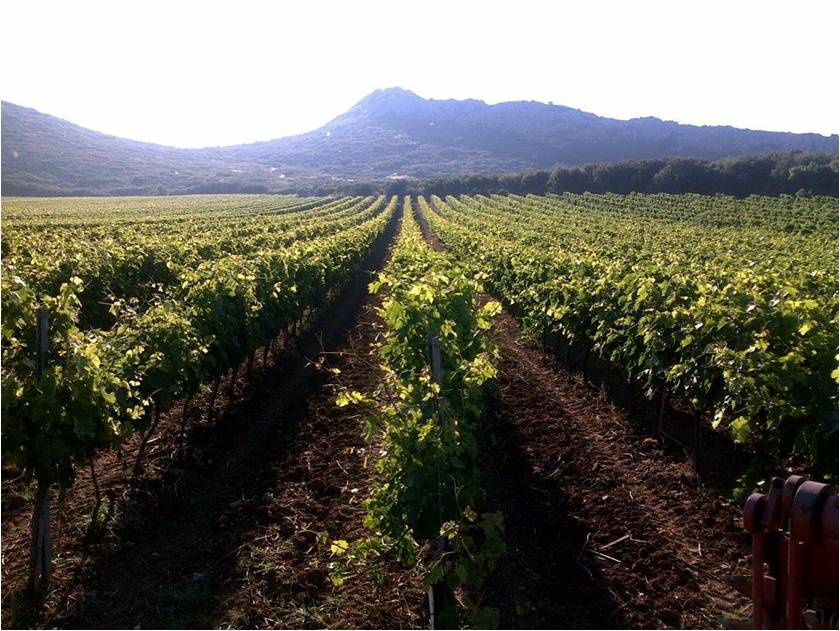 The winery is situated in Distomo and I spoke to Alexander Kosteletos, who lives in London and shares the winery with brothers Stathis and Angelos living in Athens. He works as a data analyst, studied the WSET Diploma and runs a small distribution company for their wines in London. Their grandfather started the Dimakas winery in 1950, farming Savatiano and Roditis. The brothers rebranded and replanted with Limniona and Syrah in 2014. Their vineyard is about 2 ha (pictured below) and the production at about 8-10,000 bottles. The vineyard is at the foot of Mt Parnassus (2400m), which acts as a barrier to the clouds of the Corinthian gulf. Aromas and acidity are retained by the large diurnal variation and the cold winds descending from the mountain (there may be snow even in April). East facing, at 400 m elevation and sloped with good drainage, “the slope also protects the vines from frost”. The soils are described as limestone with clay. Organic farming (certified by Biohellas), bordering on biodynamic.

“My conviction is that you make your wine in the vineyard. The vines need passion, time and love. I try to green harvest at veraison because that will give me smaller, more concentrated fruit. We are taught that Syrah is a late-ripening variety and this I normally harvest mid September, which would make Limniona extra late-ripening, as it is harvested a month later”. Natural yeast fermentations, at rather low temperatures, malolactic conversion in barrel, no stabilisation, slightly filtered. “My ambition is for Greece to become known for its red wines and not only its white wines”. For now they have harvested quite a few medals for the design of their bottles and have done very well in Lyon and IWC. 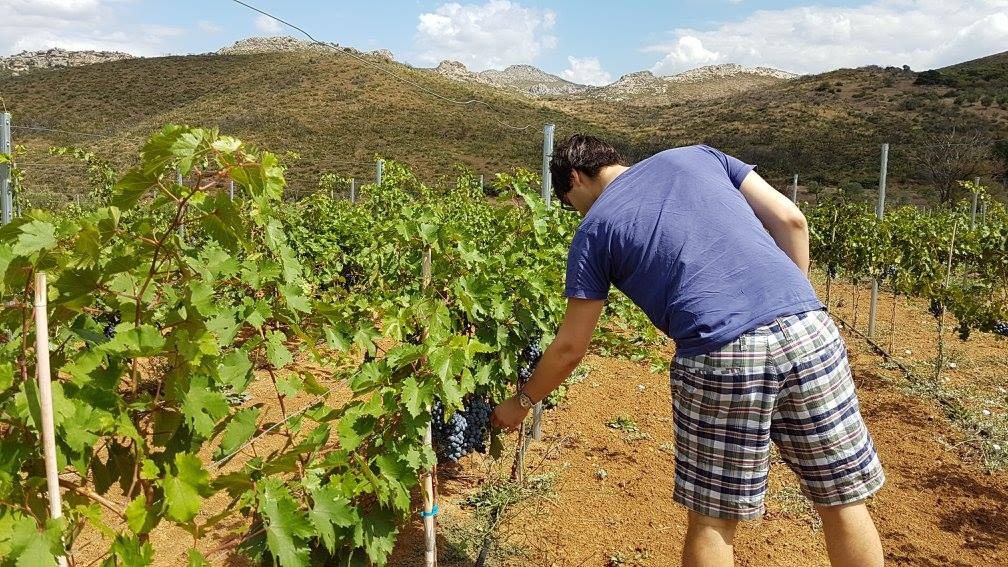 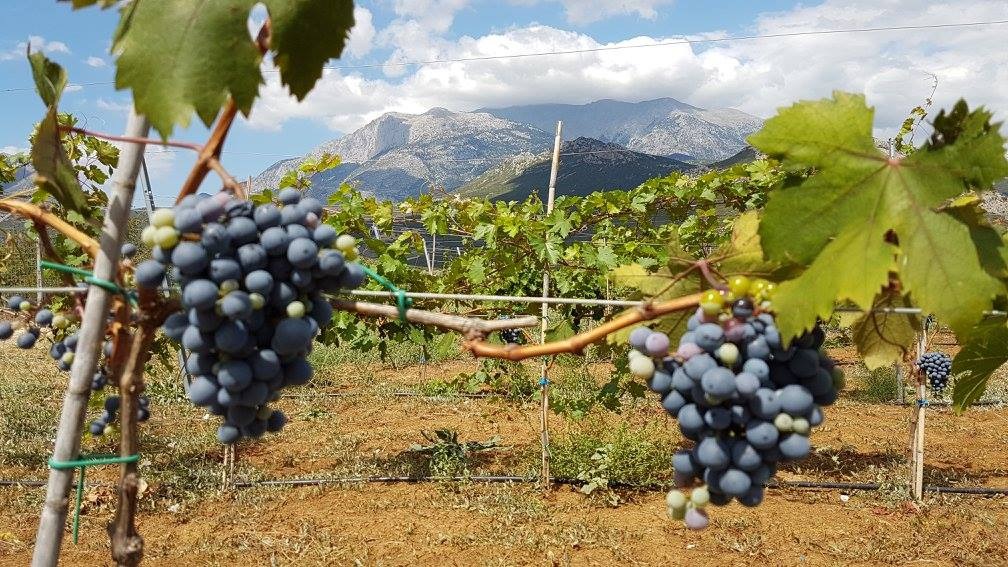