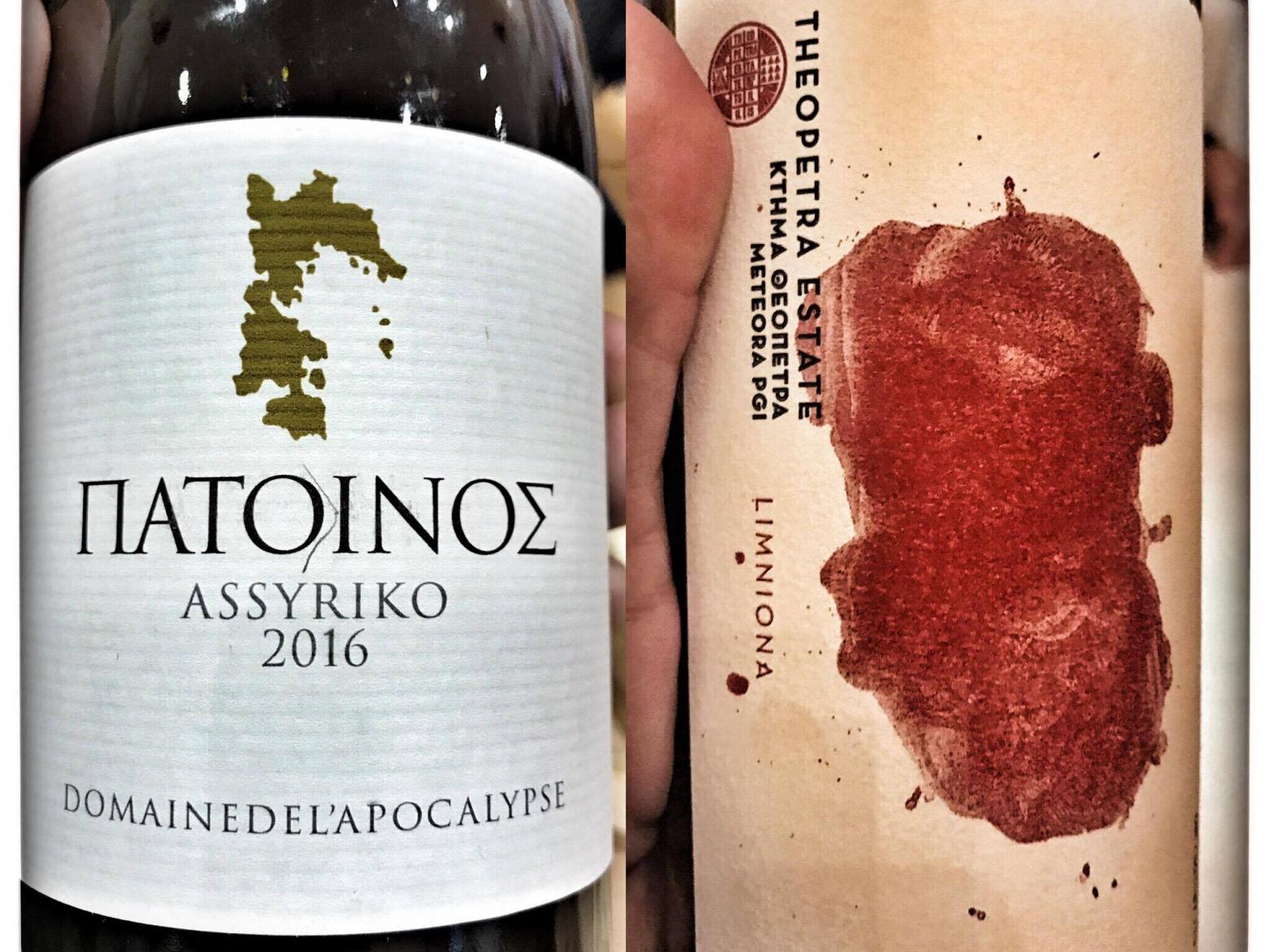 To drink this week: Assyrtiko and Limniona

This week's choices are a singular Assyrtiko from Patmos island and a Limniona from Central Greece near the region of Meteora. Τhe latter area is associated with one of the largest and most precipitously built complexes of Eastern Orthodox monasteries in Greece, second in importance only to Mount Athos.

While I would argue that Assyrtiko needs none or very little introduction, an interesting discussion can be initiated for red Limniona. I personally find it as one of the most intriguing and upcoming Greek varieties producing wines with intense aromas that can be herbal and floral with a solid core of red fruit such as cherry and strawberry. It is a late ripening variety, harvested typically at the end of September which means that it can prove to be challenging for full maturity in a classic rainy September. Unfortunately we are at the beginning of the Limniona journey since just a handful of single varietal examples exist at the moment.

No big secret that Assyrtiko is exploding in Greece and beyond. One of the most underrated white grape varieties of the world is now planted all over Greece; from Goumenissa and Amyndeon to Greece's largest island, Crete. There are some fine new efforts that contribute to the diversity of the variety such as the beautiful skin contact Assyrtiko from Domaine de Kalathas in Tinos island, the single vineyard version from Lalikos winery in Macedonia and the Patoinos concept below, is I think another revelation.

Obviously!  As it comes from Patmos island which is most famous for being the location of both the vision of and the writing of the Book of Revelation by Ioannis of Patmos (Apocalypse in Greek and French), so one can see the connection with the domaine's name. Patmos defines the eastern boundaries of the Aegean sea located in the Dodecanese complex very close to the borders with Turkey.

Patoinos now is the brainchild of Swiss politician Josef Zisyadis and I understand it more like a work in progress, a project if you would prefer. Zisyadis' vision comprises of re-establishing viticulture in Patmos through a domaine which is supported by people's donations. ''So far 850 people have become vine root owners receiving a bottle of wine from the “Domaine” every year, from 2016 until 2025. They are mostly Swiss and Italian and few Greeks'' Zisyadis says describing his goal to produce a maximum of 10.000 bottles from Assyrtiko and red Mavrothiriko.

2016 is the maiden vintage. Vines are planted in bush vines at low altitudes with a proximity to the sea and are cultivated according to biodynamic principles, not yet certified. It was fermented in stainless steel and matured with the gross lees for 9 months. Fairly gold in colour, gives an impression of an orange wine. Deep aromas with an oxidative soul. Fleshy and layered, this is at the same time salty and round because of the few residual sugars with a fine texture and long finish. Totally different in terms of character and perception compared to other islandic Assyrtikos. Fine artisanal effort. (13.6% abv, 4.8 g/lt rs, TA 6.2, pH: 3.2, Assyriko shown on the label since for now Assyrtiko in not permitted to be written because of bureaucratic reasons) 92/100

Theopetra Estate is the wine project of Tsililis family famous for producing quality distillates in Greece. It is run by Ioanna Tsilili educated in Bordeaux and is currently producing nine labels across all styles. I talked previously about the challenges of late ripening Limniona yet I would like to emphasize that Limniona is still sailing into uncharted waters compared to what we know about Xinomavro or even Assyrtiko.  We cannot really talk about typicity of the variety by tasting two or three examples, many more efforts are required.

Theopetra's approach on Limniona aims for a medium full bodied wine with solid tannins that can reward some years of aging. It is a classic wine that needs decanting and takes about an hour to open up. The grapes are sourced from three vineyards with very low yields of 36 hl/ha and the must is fermented partly in big oak casks of 5 tonnes. 12 months maturation follows in 65% new oak. 2013 vintage produced 4.000 bottles that retail in Greece for 16 euros.

Dense nose with ripe peach, sweet spice, ripe cherries and integrated new oak. Personally I would favour less oak influence, yet it is definitely supported by a solid core of fruit. Velvety on the palate, elegantly structured and layered it will hold for the next 5-6 years. 91/100