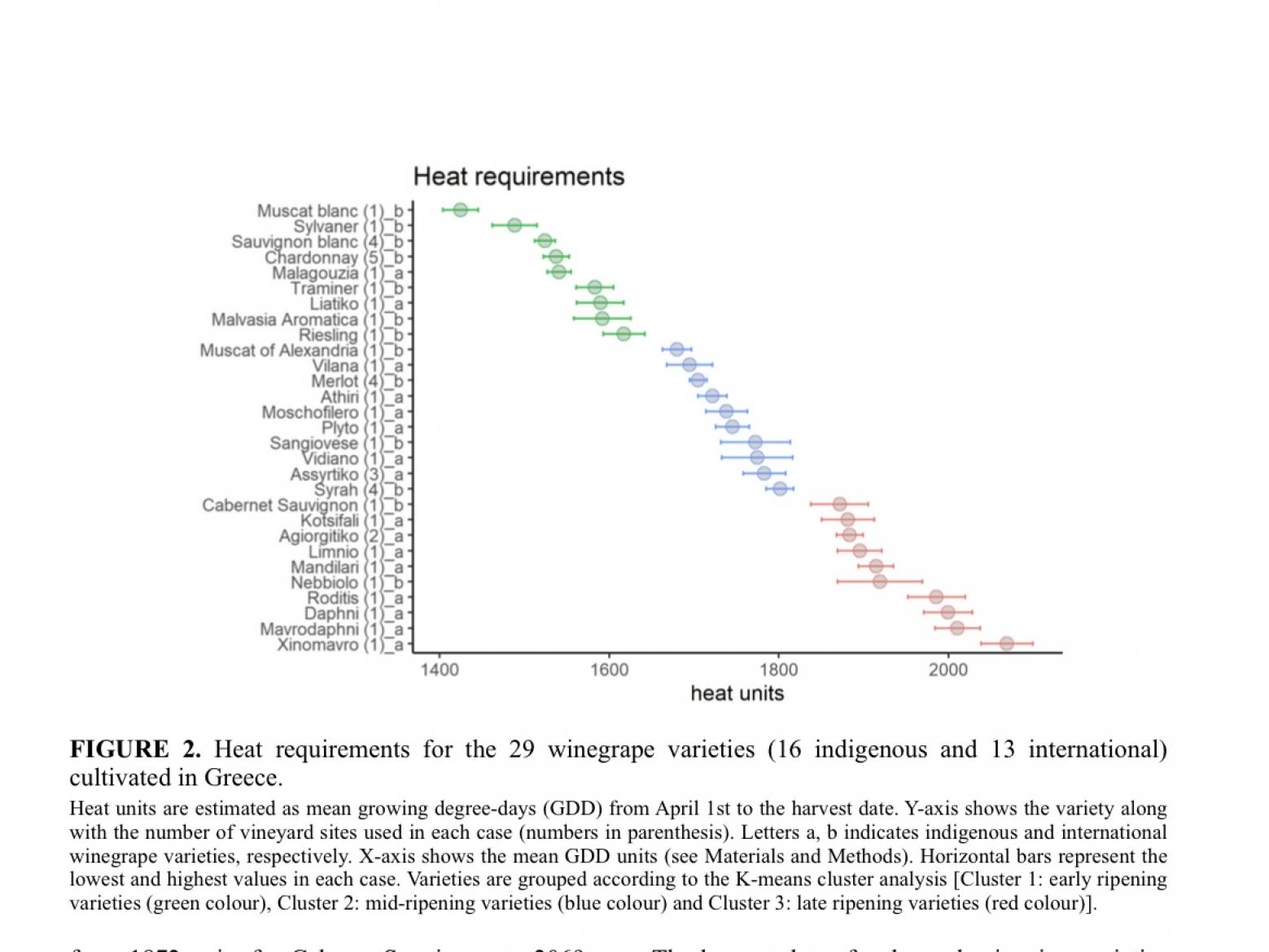 The Future of Greek varieties

Rare indigenous varieties and the numerous terroirs of the different regions around Greece are the treasures of the precious Greek wine heritage. The deeper we understand these, the higher Greek wine will rise. New research about climate change and the varieties of the Greek vineyard is now available. It completes our areas' climatic classification, which I described in a previous article 'The challenge of climate change in Greece'.

Let me remind you that the main areas were classified according to the following data (Growing Degree Days - GDD according to the Winkler Index (WI) classify the areas into 5 categories from the coldest to the warmest (Regions I-V):

The main areas with their respective Growing Degree Days:

But let’s move on to the updated information given. The recent study Adaptive capacity of winegrape varieties cultivated in Greece to climate change: current trends and future projections, again by Koufos, Mavromatis, Koundouras and Jones, published in December 2020, adds a new wrinkle to the elaborate composition of Greek wine. More specifically, it records the Growing Degree Day requirements of each variety. In simple words, how much heat a variety requires to ripen.

What exactly does this mean? That the data given above about the regions helps us select the most suitable variety for each region.

Of course, the study includes more information, e.g. it researches future harvest dates based on climatic conditions for the periods after 2040 and concludes that the indigenous Greek varieties appear better adapted to the recent and projected future climate of the region; in fact, they are less affected by global warming when compared to international varieties in the majority of studied cases.

2. The earliest ripening variety is Muscat Blanc in Samos (August 5th), and the latest is Moschofilero in Tripoli (October 2nd).

4. On average, white varieties had slightly lower potential alcohol than red varieties (12.7% vs 13.9%).

5. In the analysis of Growing Degree Days, which is the core of the research, three variety clusters are defined:

The first, with the lowest requirements, where cooler climates allow ripening, includes 9 varieties, Muscat, Sylvaner, Sauvignon Blanc, Chardonnay, Malagousia, Traminer, Liatiko, Malvasía Aromática and Riesling. These are the early ripening varieties that require from 1427 to 1617 GDD.

The second cluster has 10 mid-season varieties ranging from 1680 (Muscat of Alexandria) to 1801 GDD (Syrah) to fully mature. The other varieties included in this cluster are Vilana, Athiri, Moschofilero (apparently not such a late-ripening variety after all), Plyto, Vidiano, Assyrtiko (which does not seem to be such an early ripening variety), Merlot, Sangiovese.

The third cluster includes 10 late-ripening varieties that require from 1872 (Cabernet Sauvignon) to 2069 GDD (Xinomavro) to fully mature. The other varieties are Kotsifali, Limnio, Agiorgitiko, Mandilari, Roditis, Dafni, Mavrodaphne and Nebbiolo.

In general, late-ripening varieties often experience a maturation period that does not allow sugars to accumulate to maximum levels, thus warming would result in an improved sugar/acid ratio at harvest but without, or with, a smaller shift in harvest timing.

The research concludes that although the results of varietal clustering with the use of the GDD formula presented are promising, especially regarding the number of indigenous varieties in the late-ripening group, an adaptation of viticulture to future conditions based on the thermal requirements of the grape varieties alone will probably not be sufficient.

In the near future, choosing the right variety will be a particularly complicated process—a puzzle for strong solvers.