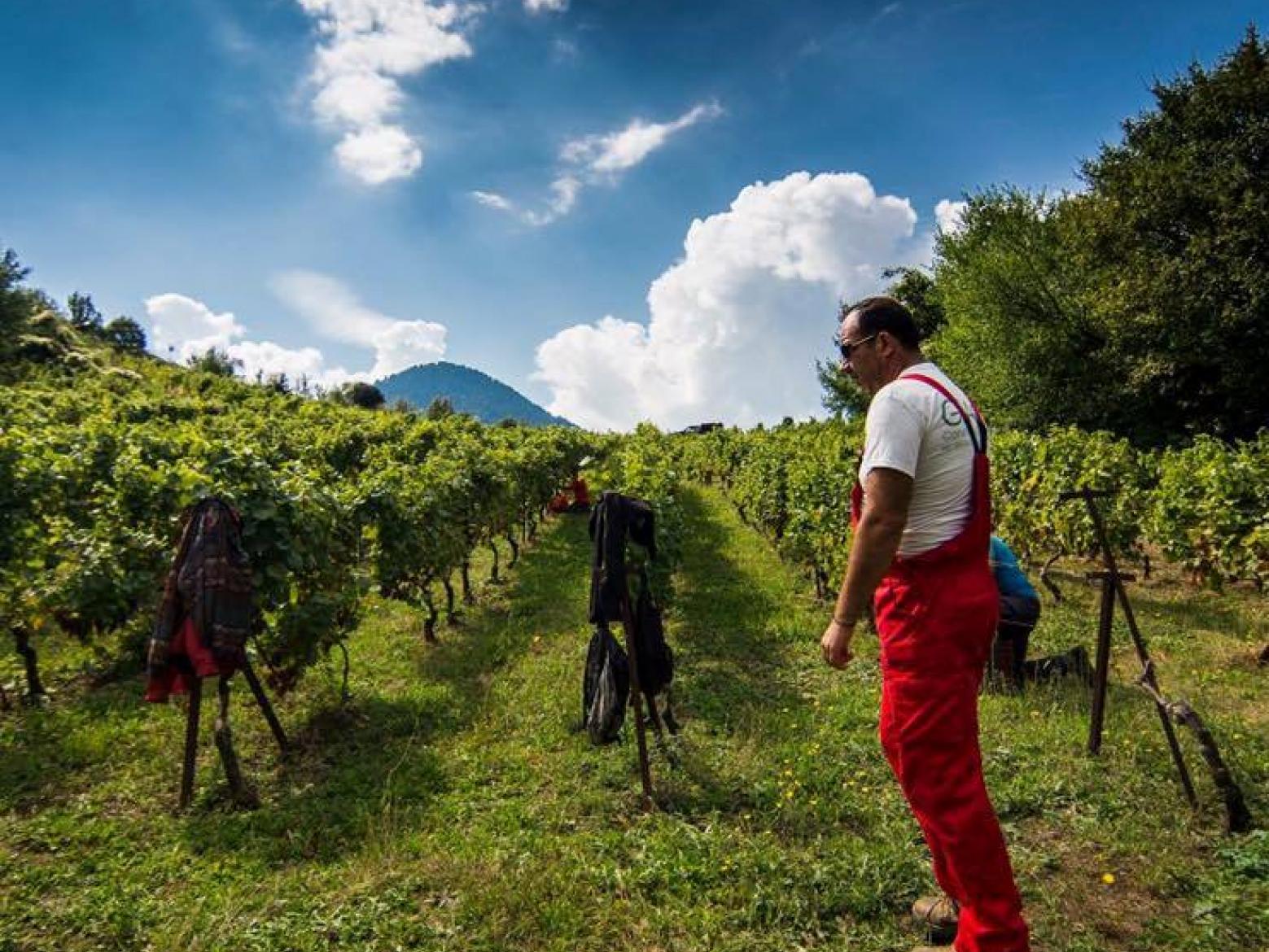 2016 proved to be a rather tricky vintage for Greece; when everything suggested a top vintage, extended rainfall in Peloponnese and Macedonia caused serious problems for late ripening red varieties such as Agiorgitiko and Xinomavro. Overall 2016 looks more of a white vintage, while for reds extra caution will be needed both in the vineyard (with rigorous selection) and in the winery with detailed winemaking.

For Naoussa, vintage for Xinomavro started officially in September 14 but best parcels should be harvested during the following days. Moderate rainfall during the first days of September delayed sugar ripeness, so producers needed to wait for drier conditions. Overall Kostis Dalamaras from Domaine Dalamara speaks of an earlier harvest of about five to ten days than usual - depending on the site - and is optimistic of a promising, very good quality crop.

Vintage assesment: Good to very good (Update will be posted).

For Amyndeon, Angelos Iatridis commented earlier on high expectations created during the development of the growing season, provided a typical dry summer is experienced. Unfortunately that was not the case as skies opened during the critical last days of August and early September. Iatridis points out that harvest was stopped when 70% of white grapes were picked suggesting that for the rest we need to wait about ten more days. Thanos Dougos from Rapsani and Tatsis brothers from Goumenissa where Xinomavro is blended, comment on a vintage that started aiming for perfection and resulted in crossing fingers to be saved by the bell. Stergios Tatsis believes however that harvest is the apogee of a year where work carries on for 365 days, so attentive viticulture will be rewarded.

Santorini – The cradle of Assyrtiko

A particular dry vintage that started almost ten days earlier compared to 2015 (July 27 versus August 4). Assyrtiko which forms the backbone of the wines was picked in early August. Grapes looked healthy with the exception of some sunburns for the lower planted vines. In higher altitude vineyards however, the ripening cycle was more uniform. Yields were 20 to 30% higher according to Lefteris Anagnostou, oenologist for Karamolegos winery. Yiannis Paraskevopoulos from Gaia Estate speaks of a very good vintage overall.

Yiannis Kanakis, viticulturist-consultant confirms an earlier picking vintage that shows very good quality overall with the exception of lower lying parcels in Nemea, Ancient Nemea and Leondio where botrytis made its appearance after severe rainfall. Vines planted in slopes have performed very well though, while yields proved to be moderate contrary to initial prediction of a significant rise. There was a spring frost incidence on April 27 in parts of Nemea valley and Asprokampos valley, that damaged 20-100% of the shoots depending on the vineyard. Upcoming week will be crucial so there is a lot of crossing fingers for dry weather.

Vintage assessment: Very good for the most favourable mesoclimates. Challenging for the rest.

Mantinia – The elegance of Moschofilero

During Orthodox Easter week there was severe spring frost that resulted in a crop reduction of 20%. In late June catastrophe followed in the regions of Tegea and Zeugolatio with heavy rainfall. Yields are expected to be 30-40% lower. Overall a challenging vintage that started in mid September for some parcels says Yiannis Kanakis.

Vintage assessment: Difficult to challenging (Update will be posted). 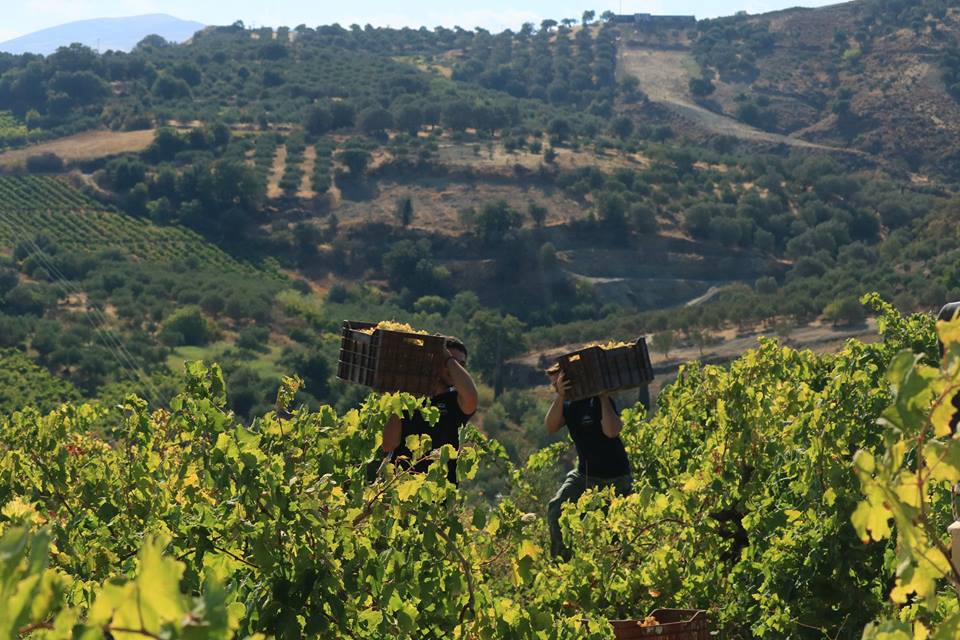 After a challenging 2015 vintage it was time for Crete to enjoy almost perfect growing conditions. Mild winter resulted in an advanced vine growing season by ten days. Draught was an issue according to Nikos Douloufakis, less in Dafnes though because of available water resources and because of porous limestone soils. Grapes were overall very healthy and vintage started approximately ten days earlier when compared to 2015. Douloufakis points that there is both, excellent sugar and phenolic ripeness which is a rare case. Upcoming Vidiano was of excellent quality.

Robolas were harvested in ideal conditions according to organic grower Vladis Sclavos starting in mid August in the beautiful terroir of Fagias which despite being high in altitude enjoys excellent ripening conditions because of its south exposure. Vostilidi followed in August 25 and Mavrodaphne at the end of August. Some rainfall at that point created moderate problems for the red Mavrodaphne.

Vintage assessment: Very good to excellent for the whites and good for the reds.

Harvest is well on the way with a reduction in yields because of adverse conditions in spring (two hailstorms in March). Concerning quality it looks to be very encouraging; Spyros Zoumboulis of T-Oinos vineyards says that despite draught conditions vines managed to get the moisture needed. Overall it was an earlier harvest by ten to fifteen days.

Vintage assessment: Very good to excellent for the reds and very good for the whites.

Harvest started earlier for the whites (Assyrtiko and international varieties) and was completed during a dry August says Akis Papadopoulos of Wine Art Estate. Quality is very good also for the reds which have already been harvested (Syrah) and conditions look promising for Cabernet Sauvignon that remains to be picked,

Vintage assessment: Very good to excellent for the whites and very good for the reds.

Warm but not overtly hot summer except for some high temperatures in late June (crop reduction 10-15%) resulted in ripe and healthy Savatiano grapes says Vassilis Papagiannakos of Papagiannakos winery. Initial prediction for an earlier harvest was not confirmed says Stamatis Mylonas because August experienced moderate temperatures that delayed ripening.

** Updates will follow for the harvests in Naoussa, Amyndeon, Rapsani, Goumenissa and Mantinia.