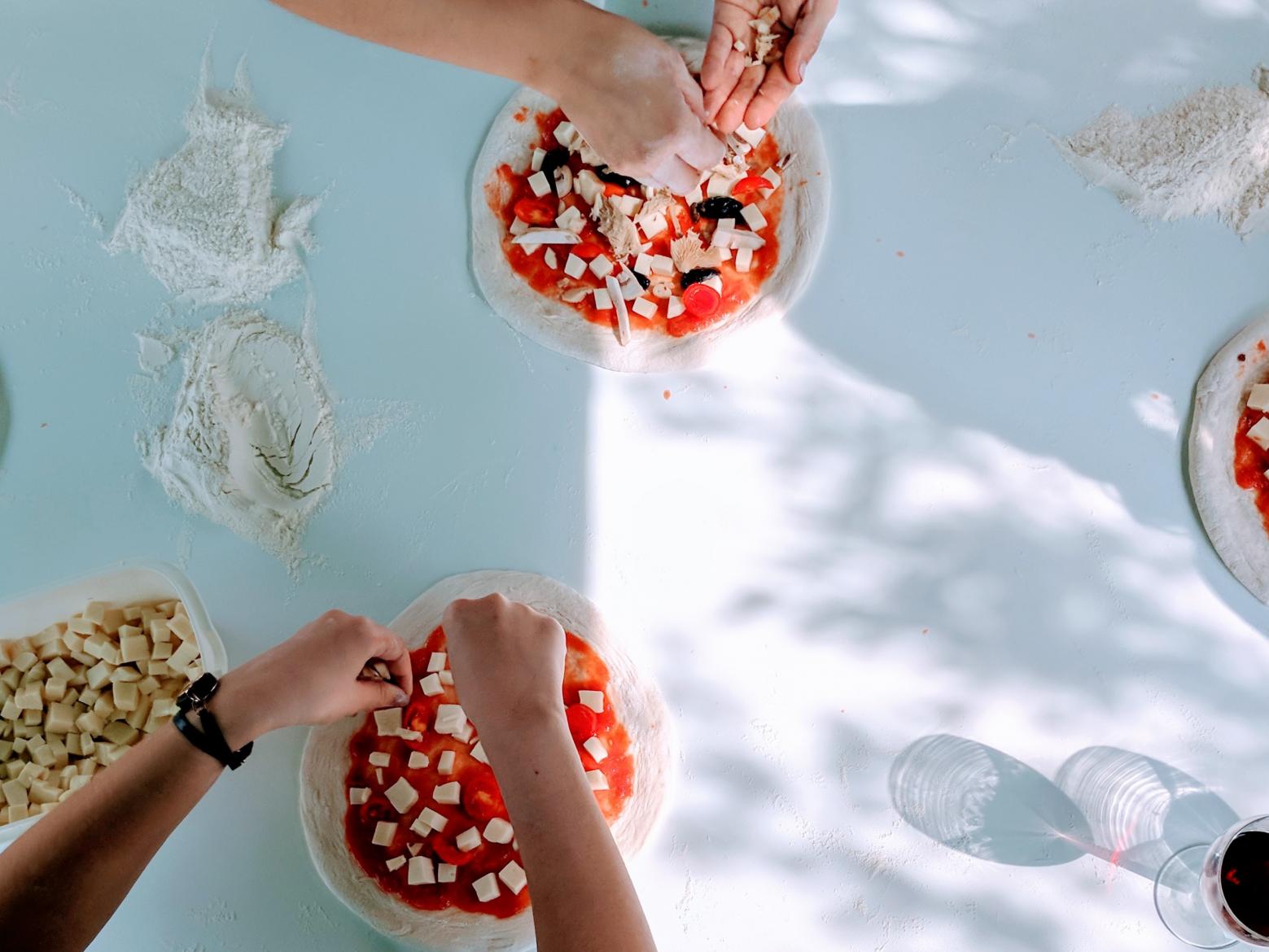 I would very much like to brag that every time I think of a food and wine pairing I always get it right, but unfortunately, that is not the case. In Food and Wine pairing, it seems, practice makes perfect!

I would like to emphasize the difficulty of finding the perfect (or even, good enough) match, of food and wine. It is not enough to adhere to the rules of pairing. It takes much more than that. Last week, the terrible wine gang I belong to, got together for our usual ‘drink, eat, laugh, philosophize, tease, show off, have fun, leave a little inebriated,’ gathering of about once a month. At these gatherings, we bring wines we would like to taste with friends who can appreciate and comment on the wines. We always get carried away and try more than we should.

This time our friend Caroline, who had invited us to her home, decided on a themed night. She would be making different types of pizza, for which she had researched some pairing suggestions, and we each had to bring wine. We would all decide on what we thought of the pairings. Her tomato sauce was brilliant, and her pizzas were some of the best I’ve had. This is where the problem of pairing begins. It’s not enough to know the particular characteristics of a variety or area, you also have to know the particular wine, of the particular producer, of the particular year very well. You also need to know what the particular dish, from the particular cook, tastes like. That is why somms are invaluable. Not only do they know many labels of wine very well, they also know the style of food from the chef they work with.

Of course, we all made calculated judgments, but half the times fell short of the mark. The one problem was that we hadn’t realized how overwhelming the tomato sauce is on a pizza (or how much Caroline’s tomato sauce dominates the palate - as she had teasingly written to us - since we had never tried it before), and the second was that we weren’t always familiar with how a wine tasted (many times we have bought wines that we would like to taste, without actually knowing exactly what to expect). The wines that ended up being best paired, were actually the wines we knew very well. The rest were, pretty much, a hit and half miss situation.

With our first pizza which was a Pizza Margherita (pommodoro, mozzarella, basil) we tried the Denis Jamin ‘Les Fossiles’ rosé 2016. A pinot gris wine which has aromas of apricot, white peach, acidity and minerality. The pairing I would consider, neutral. Neither the food nor the wine was particularly enhanced, neither was particularly destroyed. I wouldn’t have cried if that’s what I had ordered, but I definitely wouldn't repeat the pairing.
Again with the Margherita we tried a wine you would expect to have paired a little better. ‘Soul’ by Anastasia Fragou, a rosé wine which is 70% Agiorgitiko, 30% Merlot. A wine which is crisp, and has aromas of red berries and pomegranate. This pairing was unfortunate because the wine had too much finesse and was overwhelmed by the pizza.

Our second pizza was called ‘Greca’ and included the pommodoro, feta cheese, green pepper and green olives and with this we tried ‘Botanic’ - a sparkling, resinated wine made of Savatiano that has caused quite a stir in the world of Greek wine. Here we had two problems. Although feta cheese is rather fatty, it didn’t have the weight needed to tackle the bubbles. Altogether, despite the resin, which was prominent enough, it felt as if the wine ‘disappeared’. The wine was too watery and short with the resin and the bubbles taking over, but with no other taste left, when combined with the pizza.

The third pizza was a Margherita with Anchovies and this was paired with a Dopf Riesling 2012 from Alsace. Here our views were divided. Some liked the pairing, some didn’t. I didn’t. The acidity and minerality worked fine, but I wasn’t too happy with the residual sugar. Maybe a Riesling from another area or an Assyrtiko would have worked better.

The next was a Pizza al Funghi that we tried with 2013 Il Bacialé, Monferato; this was probably the worst pairing of the evening. The wine was astringent and high acid and it seemed as if both the wine and the pizza were disserved.

This was followed by a Pizza with Italian Salchicha and Funghi served first with a 2005 Beaune 1er Cru, Les Cent Vignes, Régnard, which did not do either a favor, and was then tried with 2013 Earth and Sky by Thymiopoulos, and this was a perfect match. The tomato paste, olive and earth aromas that Xinomavro acquires with evolution, together with the acidity handled this pizza beautifully.

Our next pizza was one with no pommodoro. It included BBQ sauce, mozzarella, bacon, caramelised onions and blue cheese. This was accompanied by 2012 Dashing Jack, Barossa Shiraz, and once again we had a lovely pairing. The lovely jammy dark fruit handled the BBQ sauce and caramelised onions very well.

Our last pizza included parmiggiano flakes, rucola and truffle oil and this was paired with the 2016 Cazes, Red Collioure, Les Clos de Paulilles. Again no tomato sauce. A lovely wine, which the parmesan and the truffle oil handled quite well.

Our pizzas were followed by the excellent Foie Gras, that the mother of our friend Nondas makes, and of course this was paired with a 2010 Sauternes, Chateau Sigalas Rabaud, Premier Cru Classé. Dinner ended with a Gemoedsrus 2012 from the Solms Delta Estate paired with chocolate truffles. Both were pairings we knew worked well. Despite our experience, I hold that trying pairings, even if they seem wild, is the only way to really come by the perfect pair. Missing the mark is disappointing, but part of the fun. If you try often enough, you get better at it. We had a lovely evening, in a lovely garden, under the stars; good food, good wine, good company. What else could one desire? 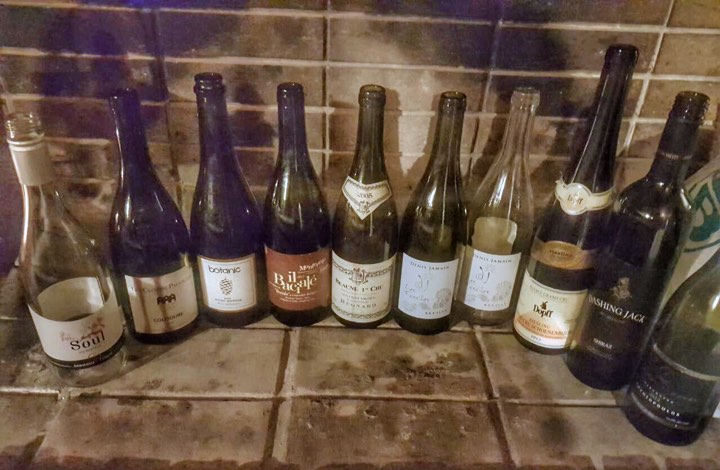 About Olga: A South-African Greek who has practiced psychiatry and analytic therapy for the greater part of her career, but is also in love with wine. She attained the WSET Level 3 qualification and is currently trying to blend these seemingly disparate interests. Writing about the different brews and the people behind them is her newfound interest. She will be contributing to the site on a monthly basis.