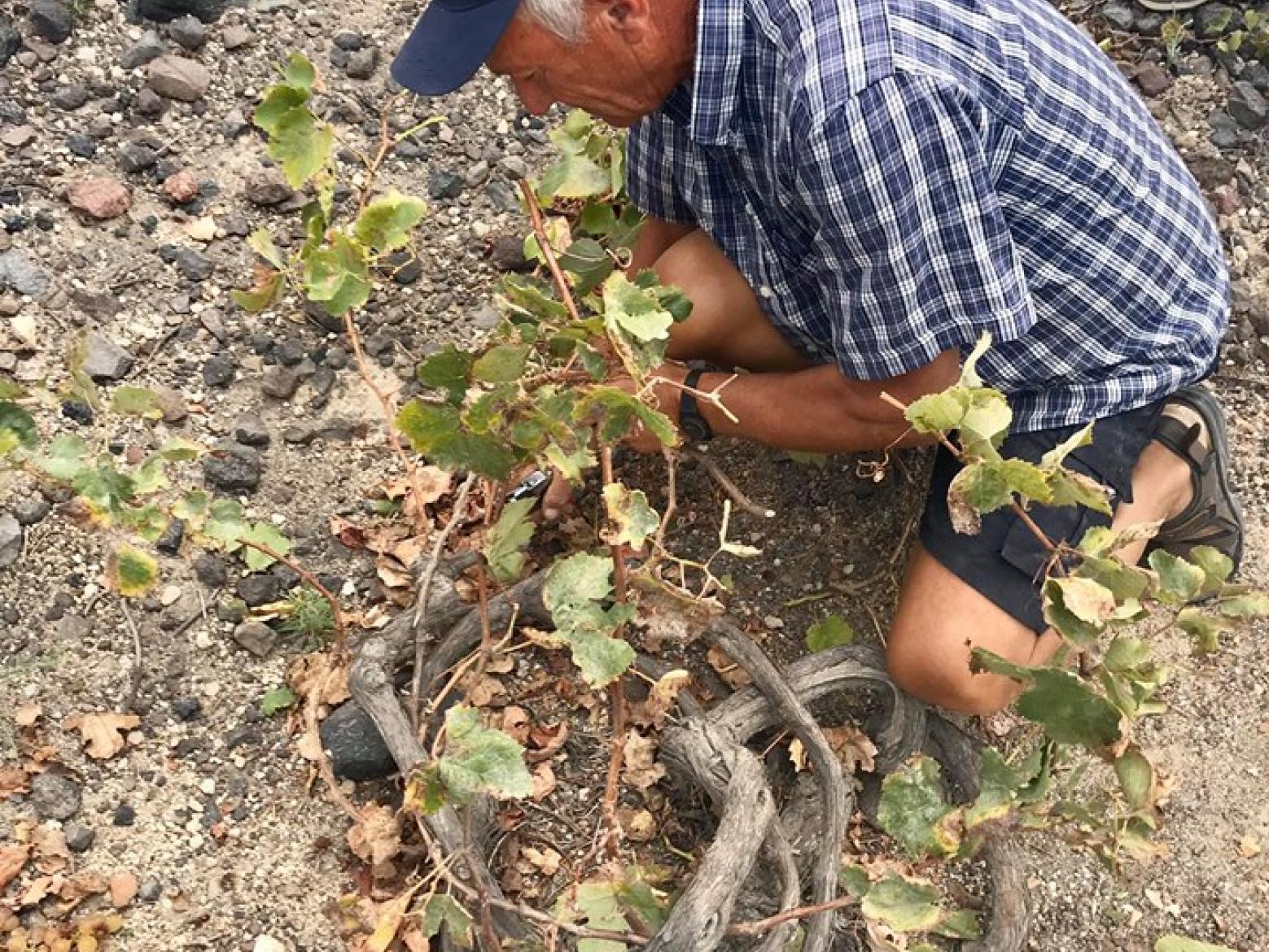 'Understanding' Santorini is rather a complicated task. Mostly because things are not exactly as they seem to be, and one has to go deeper to grasp what is going on. Even then, however, there is a good chance that the answer will not be conclusive. This may well be one of the magical elements of Santorini wine.

Exactly the fact that there is not a single interpretation about anything, but quite a few different ones. Such is the case with the vine training system. Many people may have heard about the basket or kouloura training system, but there is also the little ring or kladeftiko. Watch the video from my channel on YouTube with the experienced viticulturist Nikolas Pelekanos explaining the differences.

There are two ways to train the vines which are described below:

Kouloura or Gyristo (coiled ring). Initially, the vine is shaped as a goblet, and a cane 60-80cm long is retained with 14-16 buds. This cane is usually the most robust cane; the remaining canes are trained in a circle to form a basket-shaped vine. Training is horizontal. The canes are woven around each other; thus, the first cane is wrapped around the second, the second around the third, and so forth. This technique can be maintained for several years.

Kouloura protects from the wind and is well suited to vineyards near the caldera, called ftelika/ftelos, or the highlands of Pyrgos; difficult for large-leafed varieties such as Mandilaria and Mavrotragano.

Kladeftiko or Amolyto is the second option. Once again the vine is goblet-shaped with 3-5 branches. On each of these branches, during winter pruning, a spur is left on a lower point and a cane is left higher up, about 60-80cm long with 10-15 buds. The long canes are later bent to form a circle, perpendicular to the soil, and the end is tied to the branch. So, unlike the kouloura, here the trunk is taller, and the 3-5 small kouloures (rings), which will grow shoots in the spring and bear fruit, are parallel to the trunk. Best for Assyrtiko and Aidani in Megalochori and wind-sheltered areas.

Which is better? The island's top viticulturist Nikolas Pelekanos argues for Kladeftiko because it involves less wood. He says if you unroll all the wood from a kouloura it could be up to 6 metres, whereas in Kladeftiko it would be a few centimetres. In addition, kladeftiko allows for better aeration and healthier conditions for the grapes, since they are higher up off the ground. On the other hand, they risk being exposed to the sun and winds; a rather common hazard in Santorini.