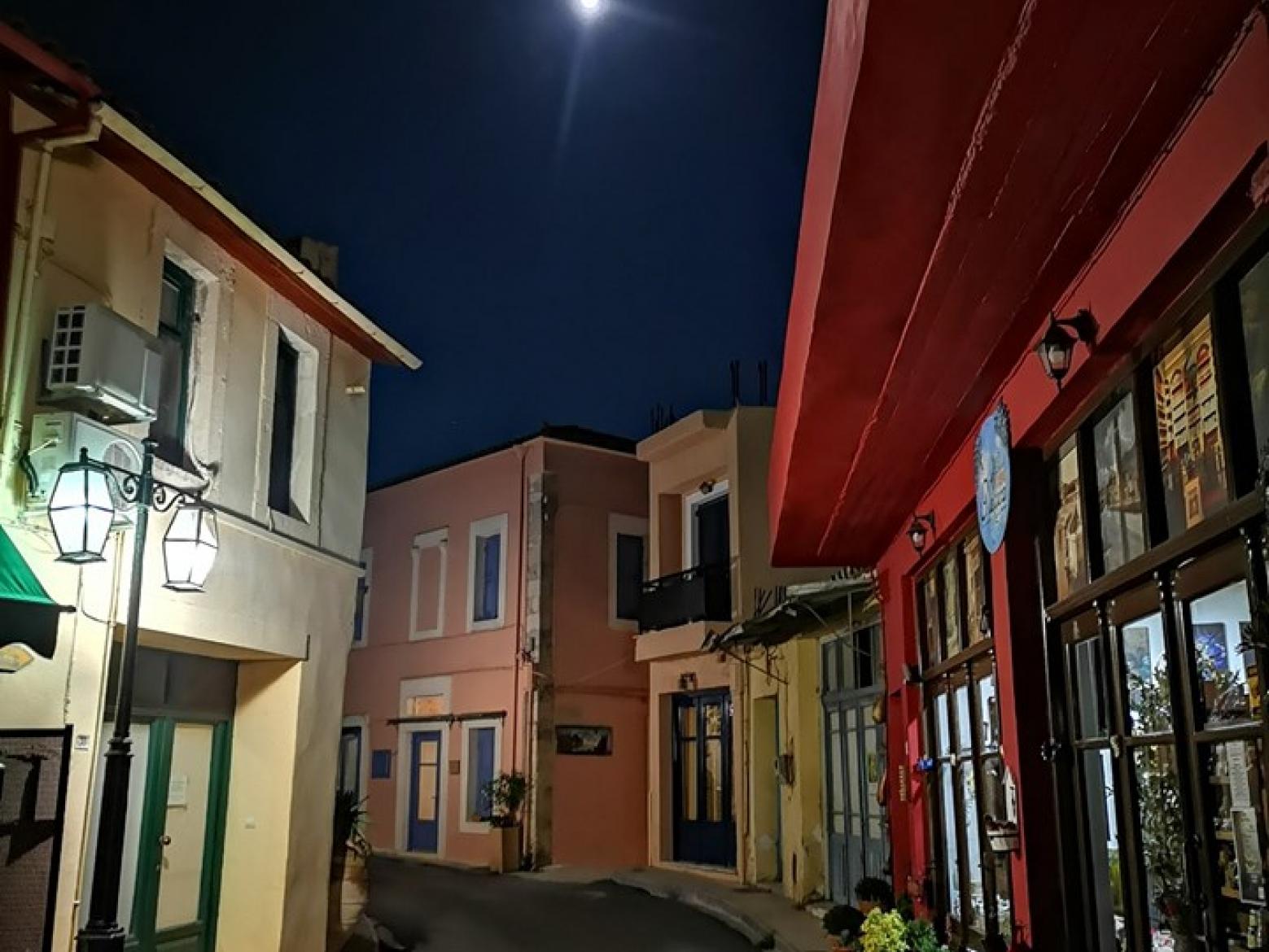 The Wines of King Minos -  Wine Touring in Heraklio

From the legends of the past and the great revelations of Sir Arthur Evans at the beginning of the 20th century when he discovered in Knossos an ideogram for wine in Linear B, the earliest attested form of Greek, Cretan wine has gone a long way. Today’s industry though has only recently turned to quality production following decades of producing ‘rocket fuel’ bulk wine often oxidized from the very start. The jump in quality is absolutely impressive, a result of many factors such as a new generation of producers that studied abroad bringing home fresh innovative ideas, a mosaic of fascinating indigenous varieties along the touristic explosion and the intense activities of the Wines of Crete network that have managed to bring to life the best of Cretan Wine.

There more than 80 producers* on the island and excellent efforts in Chania and Sitia with Yiannis Economou raising the quality bar to stratospheric heights but the heartbeat is felt in the broader Heraklio area. In these terroirs that have existed for ages, approximately 50 producers are based covering 90% of the total production. White Vidiano, the Greek Viognier, and the perfumed and singular red Liatiko get more of the attention but there are many more indigenous varieties worth discovering such as Kotsifali, Mandilari, Thrapsathiri, Vilana, and Dafni. Let’s not forget also about the Cretan version of Assyrtiko and the unsung Rhone-like reds.

A taste of Wine History around Heraklio

The vine has seen around 4000 years of systematic cultivation in Crete. No wonder that one of the oldest wine-presses in Europe (3500 years old) was found in the region of Vathipetro (9km from the city), a must-stop destination to feel the energy of the past. Another option for the visitor is the Palace of Knossos (4.5km distance from the city) where every time I visit, Ι am lost with words. Knossos has been the ceremonial and political center of the Minoan civilization and culture. There and apart from the palace of King Minos, the throne and the royal chambers there are impressive amphoras, vast underground wine storage facilities and relevant drawings providing evidence not only of wine’s central role in the life of the island but also of the sophistication of the Minoans’ know-how.

Having visited early in the morning the historical places always allow me plenty of time for a couple of wineries visits per day. Many excellent wineries are looking forward to hosting you and offer the best they have. Τhere are 3 PDO (designated areas) around Heraklio, Dafnes to the west, Archanes (pictured above), and Peza but their importance has diminished over time with many wines operating outside the PDO classification.

The zone of Dafnes which takes its name from a very old village probably of the 11th century is the most important terroir with a presence of valued limestone in the soils. It is located south of Heraklio in a distance of 18km and an altitude that rises to 500m in gentle rolling Tuscan – like slopes planted with vines and olives. According to historical documents the wine from Dafnes has been known since 1271. Near the village, there are many excellent wineries to visit most of them focusing on reds from the signature grape of the area, Liatiko.

Douloufakis is a third-generation vintner, who is regarded as the Vidiano expert producing 4 different labels and styles of this lovely white variety. He also produces reds from Liatiko among other varieties. His winery is very much Italian influenced by warm brick - red colors and himself is an excellent host. Next doors are the wineries of Silva, Idaia and a little bit more south, near Asites, Diamantakis is located. Silva is very much into a hands-off approach with an emphasis on organics and biodynamics offering three different wine tours while Idaia in Venerato village focuses almost exclusively on local Cretan varieties with sound examples of Vidiano and Thrapsathiri and a promising new Liatiko. Diamantakis possesses some of the most amazing vineyards; some of them next to the winery planted in terraces in poor rocky soils at an altitude of 500m. A visit with him in the pergola trained Vidano vines can be another experience to seek for.

Famous Greek novelist Stratis Mirivilis describes in his ‘Taxidiotika’ that his friends took him to Arhanes to see the vines. He was so impressed that he poetically thought that ‘there the Temple of Dionysus should have been located’ with all this breathtaking beauty. Kotsifali and Mandilaria is the signature blend producing a Cretan red full of ripeness, Mediterranean sun, and velvety texture. Last, Peza in the eastern part produces similar in style reds but emphasizes as well in mountainous Vilana planted at 700m, the latter being the most planted white variety of Crete.

In this area, many quality-focused wineries are to be found. From north to south options include Minos – Miliarakis in the Peza village, Rhous, Paterianakis, and Lyrarakis. Miliarakis offers a unique tasting (upon appointment) in a picturesque ‘vineyard house’ at the top of a small hill lush with vineyards, and welcomes wine and nature lovers for a unique experience of fun and relaxation. Rhous at Houdetsi, the brainchild of Dimitris Mansolas and Maria Tamiolaki, offers fast-paced tours and generous tastings but do take a moment to have lunch ‘the distinctive Cretan way’ in the village’s square.

Last but not least Lyrarakis and Paterianakis besides been pioneers in the area offer very authentic wine and food tours combining the best the region has to offer. Lyrarakis winery producing quality wines since 1966 is credited with the revival of two ancient Cretan varieties, Dafni and Plyto. Here they take wine tours very seriously offering online tailor-made packages where the visitor chooses in advance the wine tasting of their preference and the food pairings they desire. Paterianakis winery which has been a leader in organic production is famous for its unparalleled hospitality and outstanding wines in a stunningly beautiful location.

Over the last decade, Cretan wine has charted its own course, emphasizing both quality and indigenous varieties. It is the right path to follow yet the canvas is far away from being completed. Every time I am in Heraklio I can feel the energy of this constant ‘fermentation’ in the air with a new scene of natural wines exploding, the rebirth of local varieties such as Melissaki but most importantly witnessing the people’s attitude for authenticity and distinctiveness. On an island that has found a balance between freedom and beauty, a cup of local wine symbolizes much more than the joys of the body or the tastes of creation. It is knowledge of life, a knowledge that Cretan people seem to possess demonstrating that in every aspect of their culture.

*Numbers are provided by Wines of Crete

Near Dafnes: Douloufakis, the red Dafnios, a Liatiko matured in big oak casks and his Method Traditionelle Sparkling wine made from the ‘diva’ of the Cretan vineyard, Vidiano.  Silva, the new ‘natural’ line up called Grifos and especially their Liatiko. Idaia, the singular Thrapsathiri with the very fresh acidity. Efrosyni, the Mikri Eygeniki Vidiano and from Diamantakis the newly released Liatiko Petali which has seen no oak maturation to preserve all the fruit purity.

Near Archanes and Peza: Miliarakis, the Vilana Fume from high altitude vineyards in Peza that offers a new interpretation of the variety. Digenakis, the newly released single vineyard Leivades Kotsifali from dry-farmed bush vines on limestone soils which delivers an elegant expression of understated Kotsifali. Rhous, Skipper Red a modern blend of  Mandilari and Kotsifali which is juicy, layered and rewarding. Paterianakis, the new 3.14 natural approach Red Kotsifali. Lyrarakis, an aged Dafni can be the ultimate treat but one should not complain with the pre-phylloxera single-vineyard Aggelis Liatiko.

’In the warehouse of the palace at Knossos, the steward has been watching the contents of the jars for months. When he feels they have reached their peak, he has the wine poured into amphoras, so it may be more easily transported. They are stopped up with cork covered in pitch, mud or plaster and then I put my seal on them so everyone will know I am responsible for their quality. It is a certificate of origin. Here is how we write the word wine in Cretan…’’ (The Wine of King Minos from The Wines of Gala by Salvador Dali)

First published in Greece Is Crete 2019