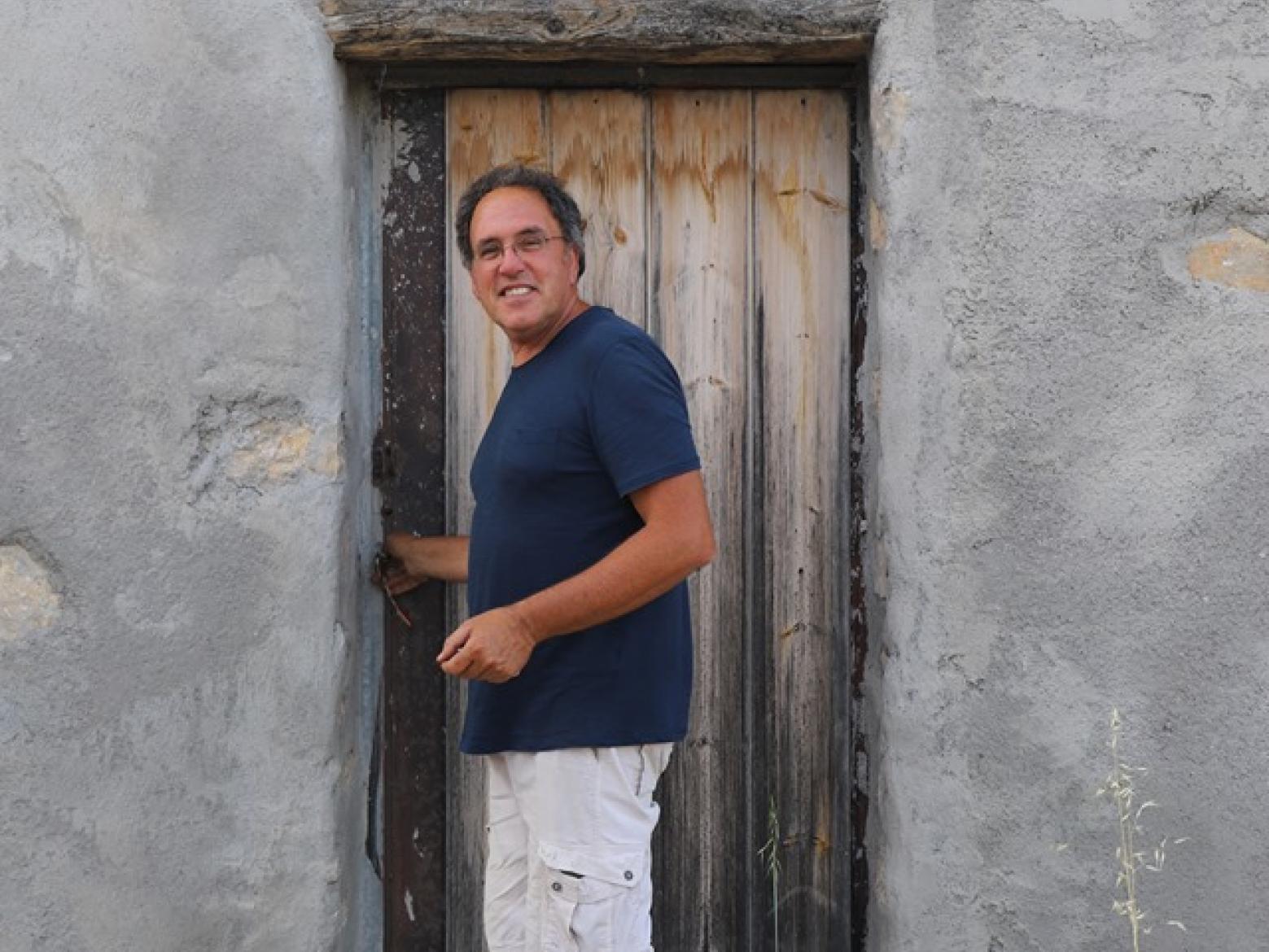 Pirates of the Aegean Part 1: Visiting Ekonomou in Crete

It is well known that from the 12th to the 17th century the Venetians ruled the majority of the ports of the Aegean sea, including those of Crete and the Peloponnese, which had a positive effect on viticulture. Exports of the famous Malvazia wines reached unprecedented proportions.

The Venetian fleet lost no time and loaded their ships with the heady wines, made in various parts of modern Greece, which were amongst Europe’s favourites. Unfortunately, the golden era came to an end when these regions were taken over by the Ottoman Empire, so the Venetians had to look elsewhere. The chaos and despair that followed lasted for centuries and halted viticulture. During the period in which the rest of Europe enjoyed a Renaissance in arts, architecture, literature and winemaking, the islands of the Aegean had to deal with Barbarossa, the most fearsome pirate who ruled these seas.

Regions like Monemvasia in the Peloponnese or the Ziros plateau in Crete had to wait patiently for a good 5-6 centuries for a few romanticists to come along before they started seeing a glimpse of the golden era. Especially in the Ziros plateau, in the Lasithi region of Crete, it was all down to a modern wine pirate, Yiannis Ekonomou.

We met with Yiannis and his wonderful wife Natasha back in 2008-2009 in one of their very rare visits to a wine fair in Athens. I was astounded by his wines, but more importantly, he struck me with his simplicity and honesty. For years I had wondered when I would find the time to visit him, to see his vineyards and experience what he is doing first hand.

Yiannis is what I call a pirate of the wine world, a wonderful romantic who follows his heart and not the rules of winemaking or viticulture. He hijacked the best out of his previous experiences in places like Château Margaux & Piemonte and came back with a clear mission; to revive the Ziros plateau and bring back its vinous glory. A man of few words, he lets his wines do the talking. The truth is that quite frequently people name him a lunatic or crazy because they simply cannot understand his philosophy. To visit Yiannis and his wife Natasha, you need to be open-minded. Forget what you’ve learned in the books or what professors teach their students in various wine colleges around the world. Free your senses and treat this experience like a visit to a Picasso or the Tate modern art museum. You may not understand it, but you can taste it.

And visiting Yiannis is a unique experience. Already the drive up to the Ziros plateau, with the windy roads, climbing up the mountain and the beauty of the surrounding nature fills your heart with joy. We arrive at his home, tucked away in a quiet street, a simple but wonderful Venetian styled house reminiscent of the glorious past, which has been in his family since the 15th century. Yiannis and Natasha were waiting for us in the yard; a couple of glasses were set on a table and the evening sun lit up the apricot tree, full with ripe delicious fruits, which we just couldn’t resist. Simply the perfect setting for a chat with friends. That’s how they host their guests. Nothing like the usual corporate tasting where one is locked in a sterile room with artificial lighting and wine is treated as a commodity. Just before the sunset, we go for a walk in the vineyards, located in the outskirts of the village. At an altitude of around 600-650m above sea level and with the surrounding mountains, the vines enjoy the long growing season that the diurnal variation offers. He experimented with various training systems, but Liatiko and the white varietals are Gobelets (Bush vines), which is what Yiannis believes is ideal for the location. Most importantly, the majority of the vines are own-rooted! The soils are predominantly calcareous, with clay that goes deeper in certain parts and YES, phylloxera exists. It is known that the aphid has a complex life-cycle, that can be divided into four principal forms: sexual form, leaf form, root form, and winged form. Yiannis explained that he hasn’t observed the aphid’s leaf form of life, as there are no signs of eggs laid on the underside of young grape leaves. Possibly a weaker strain of the aphid that doesn’t thrive in the area? Vines are planted in perfect harmony with the local flora and the smell of wild thyme is so captivating. His vineyards are the epitome of a beautiful garden. 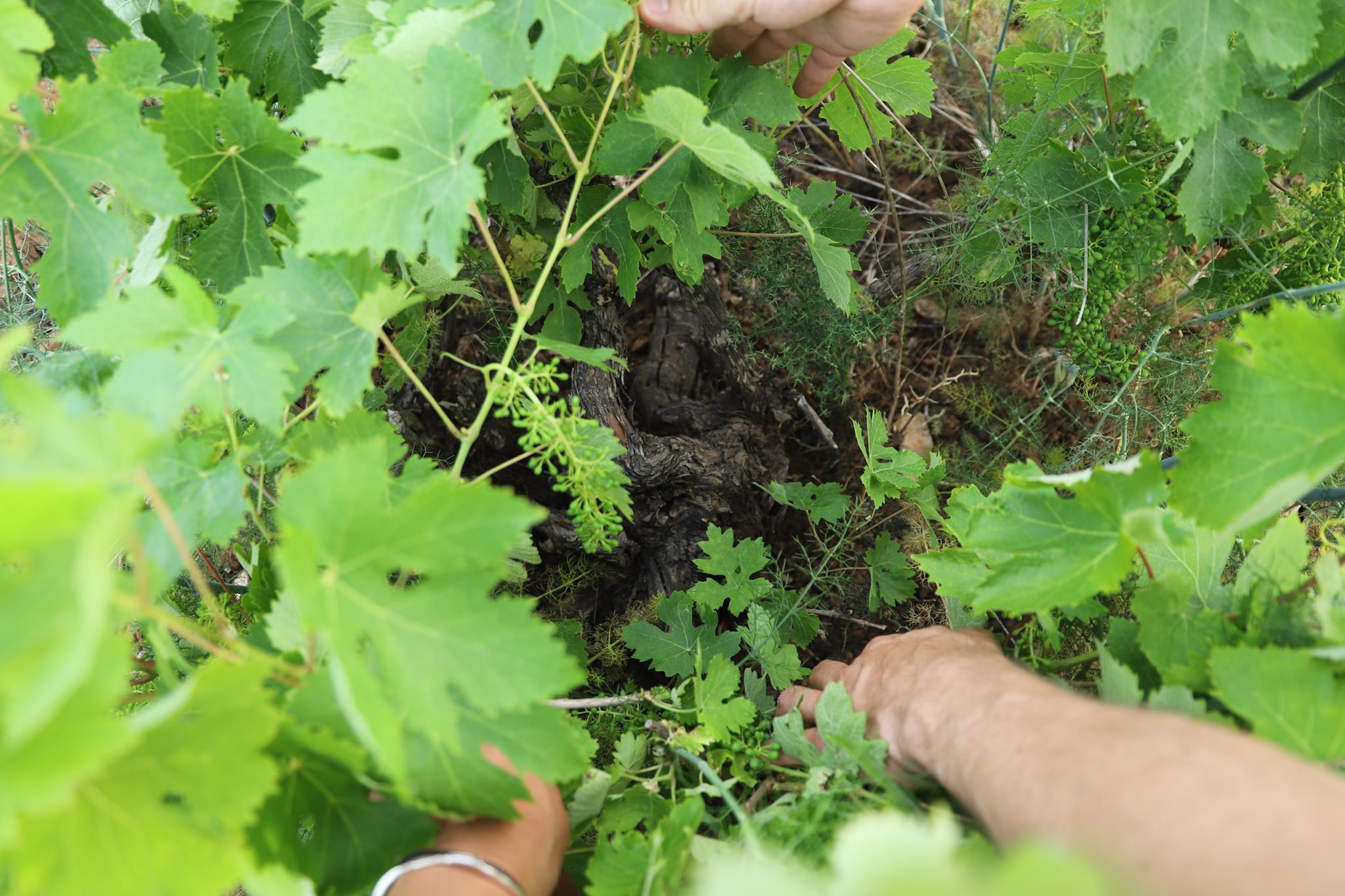 Then we were in for a rare treat, as he brought us to the room where his matured brandies are kept. He makes them out of the vinaccia that is left over after vinification and they are matured in old oak casks for years or even decades. The surprises were not finished though, as tasting his vinegar was about to follow. So powerful and concentrated, that a few droplets will highlight any fine food. Who else would dare have you taste brandy & vinegar before tasting his wines? Only Yiannis would do something of this sort.

Back to the yard, time for the wine tasting. Yiannis commented that we will not taste from bottles.

‘I would like to show you a few things; a few colours of my work’, he said…

We started by tasting a couple of younger wines straight from the stainless steel tanks. The varieties were Thrapsathiri and Assyrtiko, which give you a picture of the aromas he is playing with. But don’t get fooled. These wines are just blending materials.

Yiannis suggested that we keep some of these wines in our glasses. Then, it was showtime. He kept bringing wines of various stages of evolution, oxidation and concentration. As a real maestro, he started using these wines as blending components and showed us how even small drops of a wine can change something dramatically, adding layers, complexity, depth. Blending for me is a real art and Yiannis is a genius on the subject. If there is one thing a person can learn in Bordeaux, it is mastering the art of blending wines. How to utilise all the colours that you have available and make a wine that speaks of a place, is real craftsmanship. And his vision is to make wines that speak of Ziros, reminiscent of the wines that were sold to Venetians, wines full of flavour, character, texture. These wines are not for the faint-hearted. They are powerful, not in terms of alcohol as this tends to be moderate due to the altitude and breezy nights, but with lots of weight; heady. If you are looking for something more familiar, think of old school white Riojas and Chateau Musar.

Nevertheless, Liatiko is the variety that Yiannis put on the map and he has been synonymous with. For years I’ve been thinking that his Liatiko reminds me of a warmer version of a Piemontese wine, full of herbal undertones and dried red fruits, with soft tannins and bright acidity. Of course, that is due to his previous experience in the region and his work with names as famous as Altare, Scavino and Ceretto. What a fool I was. After visiting the vineyards, the wine is just the perfect example of the Ziros terroir, his magic hands and long elevage.

Yiannis’s elevage (nurturing) of the wines is beyond any imagination. His most recent release was the Liatiko of 2004! A vintage, which brings out the complexity and the multi-layered approach that I believe is missing in many modern wines. And patience is rewarding. Thank God, he is not listening to any accountants or directors. But he doesn’t make much, so finding the wines can be slightly tricky. If and when you do find them, my advice is: Approach it as a wine/time capsule. Are you ready to put the seat belt on and go back in time?