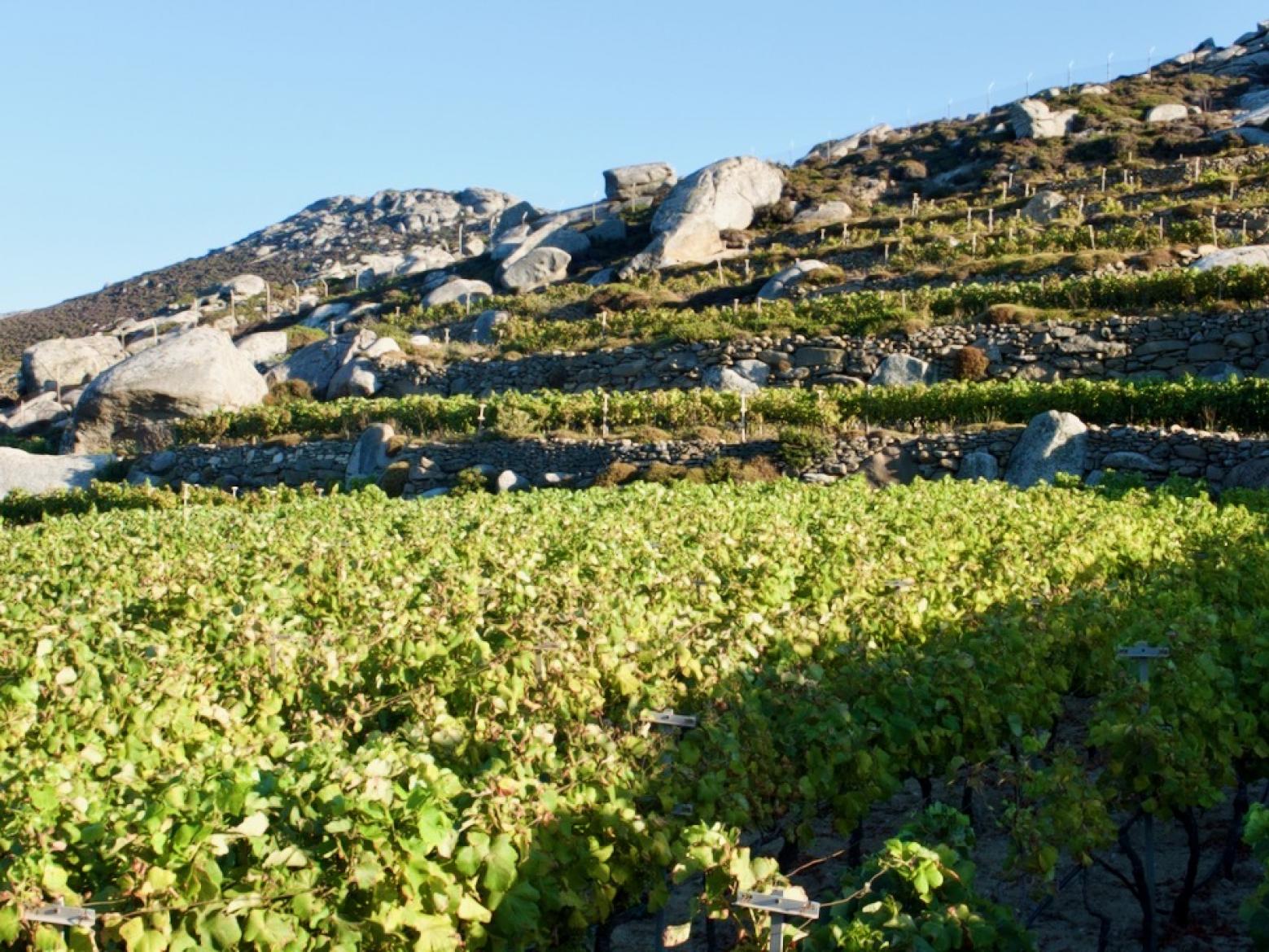 Tinos is a hidden gem discovered all the more in recent years but retains its character and authenticity. The seat of the god of the winds, Aeolos, and, oh, oh, oh, did he blow fiercely when I was visiting in late July. But, with the heat of the summer, this was so welcoming and refreshing (not to mention that it kept all the blood-sucking mosquitoes and flies away). In Greece, it is an island known to most for the Orthodox Church of Mother Mary that is close to the main harbour and features in the main town; majestic is the least that can be said, but the profound beauty of the island is its villages. Larger or smaller, each more beautiful than the next, and there are many. For the nine days we stayed, we must have walked to three or four different villages every day, many we did not get to see. The arid-looking landscape has a haunting effect, the huge round rocks of Volakas and Falatados, the numerous hiking trails, the lovely pigeon houses, so much a part of local architecture, what a place!

And, it is an island where one can enjoy both food and wine. Almost all taverns and restaurants serve home-grown vegetables, local products (cheese, cured meats, different sausages) and, of course, a variety of freshly fished seafood paired with the island's wines. We were so pleasantly surprised by this. As a student many years ago, I had visited for three or four consecutive years, but being a guest in the home of my good friend Dora in the seaside part of Isternia, I had seen just the basics. It changed from 35 years ago but still holds on to tradition.
I visited two wineries of the island, and I know that this site is about wine, but I have to start with my visit to one of the small cheese-making units.

Angela Rougeri is probably the most hard-to-get person on the island. Finding the place is even harder, as it is literally in the middle of nowhere. I had pestered her with messages and phone calls. After driving to a relatively remote part of the island, confident that we were utterly lost and there was no point in going further, the farm suddenly appeared before our eyes. Her cows were idly resting in the morning sun, seemingly indifferent to the fantastic sea view below. Angela came to meet us in a terrible hustle because this is a tiny unit run by herself, her husband and one or two helping hands. The milk collected every morning must be processed on the spot, which involves quite some work. She produces two main types of traditional cheese. One called malathouni, and one she revived called kariki. The first is left to strain in little baskets that give it its shape and then hung out to dry. The second involves making a first cheese (petroma), mashed and stuffed tightly into emptied water gourds (calabashes), sealed and left to mature for about six months. During this time, a fungus develops in the cheese, giving it its particular taste. A relatively hard, crumbly cheese with blue-grey streaks. Intense but very interesting. Nothing like Roquefort and Stilton. Completely different texture. If you find yourself on the island, don’t miss tasting her cheese in one of the many taverns, and it can be bought in a few spots in the main town.

That same afternoon we visited Vaptistis Winery. A boutique winery in Steni of Tinos that has recently added a beautiful, spacious terrace where tastings and cold plates are offered with a breathtaking view of the sea. John Vaptistis Moraitis was there on the day we visited, but as his primary business, which has to do with construction materials, is in Athens, he has to come and go. The story told was that in 2012 the family vineyard was revived and replanted with indigenous varieties, Assyrtiko, Monemvasia, Mavrotragano and Mavrathiriko; the first wine was produced in 2016 in the winery of Vassaltis in Santorini, and the winery was built in 2018. 3 ha of vineyards at 430 m altitude on sandy loam soils, tended organically (in the conversion process), and bought in grapes from old, own-rooted Potamisi vines for their Potamisi label. Our tasting was held by two lovely young ladies, Mary Skari (viticulturist) and Evangelia Alverti (oenologist), both in charge of the day-to-day business. Currently, seven labels are made in about 17.000 bottles, and the aim is to expand slowly.
We tasted several wines and vintages. A general comment would be that some slight changes to more recent vintages have favourably improved the wines.

I will stick to my two wines a winery tasting notes.

Vaptistis Potamisi 2021: An exciting wine with fennel, apple, stone fruit, some tropical fruit and an earthy character of medium acidity and a longish finish. Quite a unique wine that can pair well with meat and fish dishes.

Vaptistis Mavrotragano 2020: Matured in 2nd and 3rd use French oak barrels for seven months and a further two years in bottle. A dark purple wine with aromas of red and black fruit, like redberries, blueberries and blackberries, liquorice and spice notes, is very fresh, with good tannin structure and acidity and a long finish. Very young, will be better enjoyed after a couple of years.

The following day was the turn of Volacus Winery. We joined a boisterous crowd who had made reservations and followed Michael Kontizas and his wife Irini to the vineyards behind the Falatados village. Michael studied as a car mechanic but owned a nursery with his siblings, so tending for plants was not that new to him. In 2009 he decided to expand to viticulture and winemaking and bought 1.5 ha of land that needed to have benches made in order for it to be planted. Initially, he grew Assyrtiko. As we are standing among the weird round rocks of the area and looking at the vines, I realise that this spot is protected from the intense wind. Michael also mentions that there are historical references of the island making wine in the 4th and 6th century BCE and Venetian reports of Falatados exporting its wines to the Vatican. We are standing next to an old wine press excavated when the vineyard was being prepared. They restored it and pressed their 2019 Mavrotragano there. The soil is granitic with sand and 14% clay. He later expanded with another 1.5 ha Malagousia and 1000 Mavrotragano vines and has contracted 0.5ha of own-rooted Rozaki grapes. He is planning on planting another 4 ha. The vineyard is at 440 m altitude and is farmed organically. After walking the Assyrtiko vineyard, we visit the opposite Malagousia and Mavrotragano vineyard. We are shown around an old stone shed/home used by farmers in yonder years for a short stay when working on their farms, as travelling at that time was no easy business. Our tasting is right here among the vineyards as the day waned slowly towards sunset. In 2021 12,000 bottles of 4 labels were made.

Volacus Malagousia 2021: Part commercial yeast fermented and part ambient yeast with six months on the fine lees gives a wine characterised by fruit, herbal and mineral notes like wet stone with a slight salinity. An impressive wine and an exciting take on Malagousia.

Volacus Rozaki 2021 is made from the own-rooted vines. 36 hrs of cold soaking and some lees ageing gives a pale pink wine with red fruits like strawberry and raspberry, blossom, medium acidity and medium length. Interesting, has potential.

For more on the wines of Tinos, you can read Yiannis's articles Emerging Greek Terroirs: Falatados, Tinos, Ode to terroir: Tinos revealed and The Wines of Tinos island. 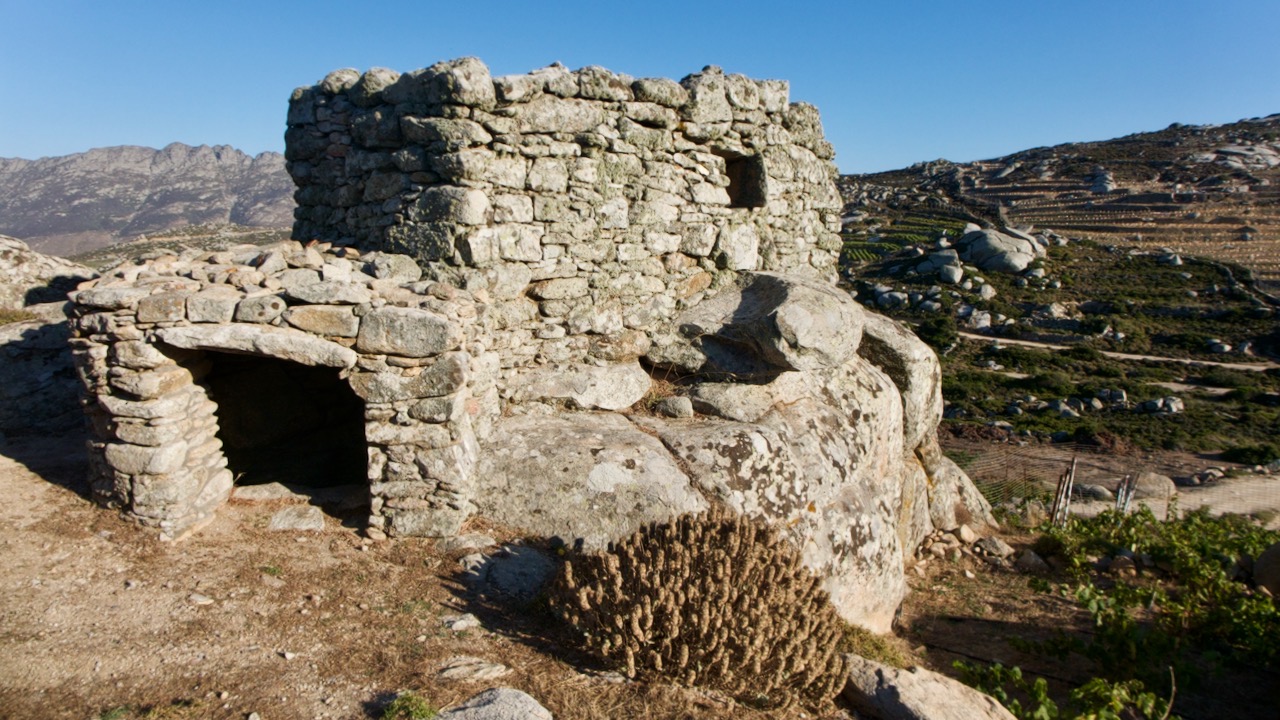 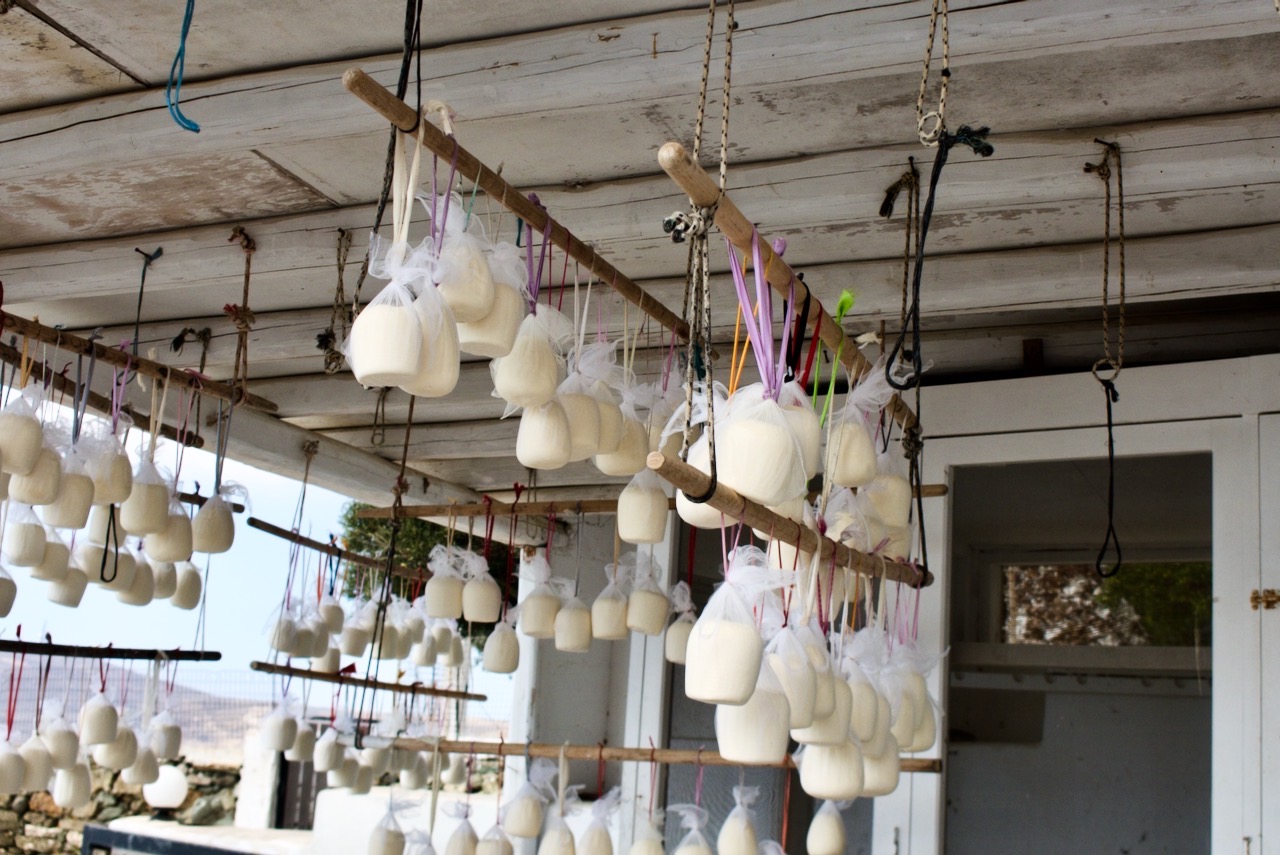 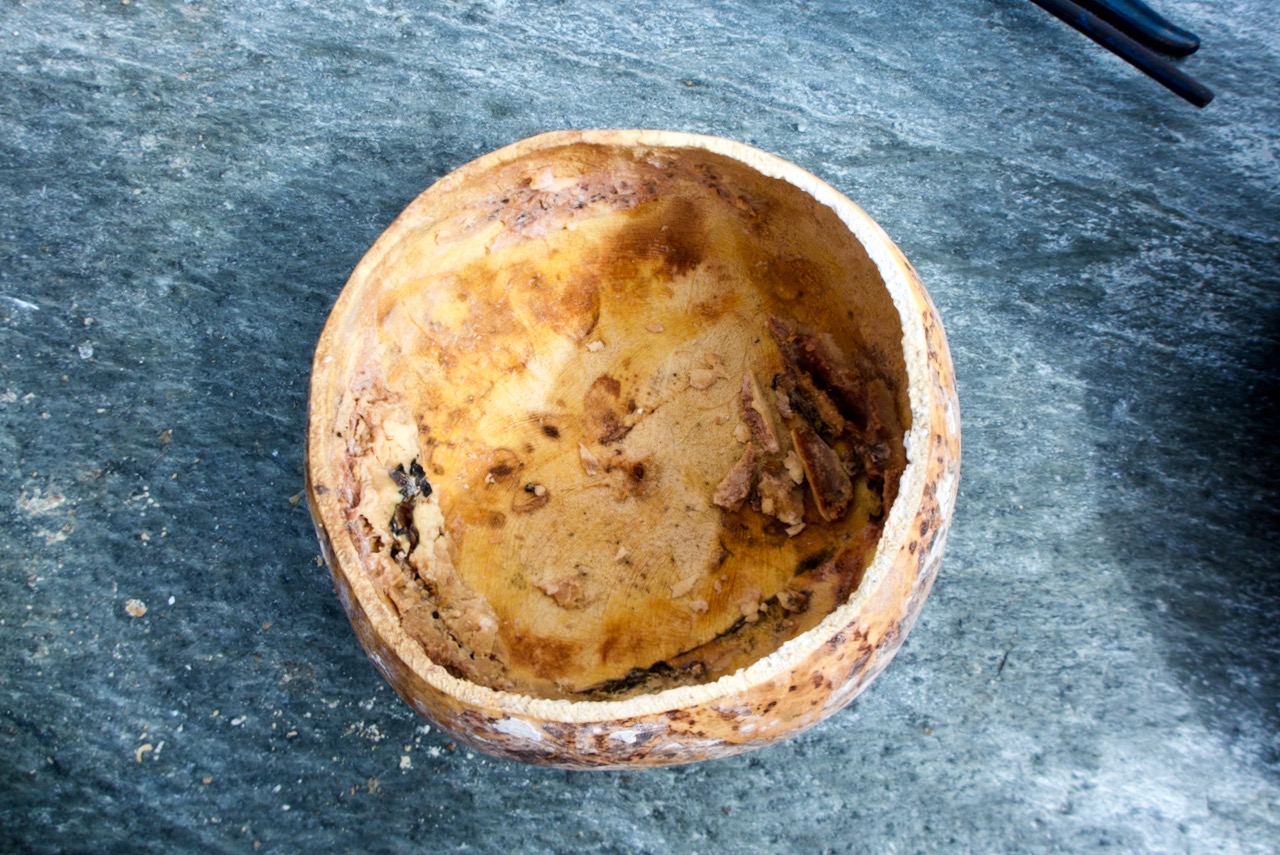